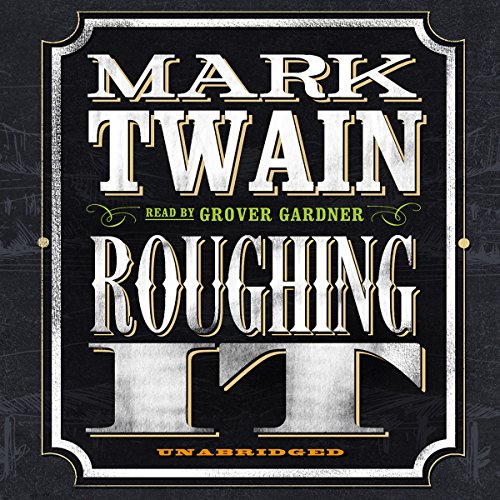 In 1861, young Mark Twain found himself adrift as a tenderfoot in the Wild West. Roughing It is a hilarious record of his travels over a six-year period that comes to life with his inimitable mixture of reporting, social satire, and rollicking tall tales. Twain reflects on his scuffling years mining silver in Nevada, working at a Virginia City newspaper, being downandout in San Francisco, reporting for a newspaper from Hawaii, and more.

This humorous account is a patchwork of personal anecdotes and tall tales, many of them told in the “vigorous new vernacular” of the West.

Selling 75,000 copies within a year of its publication in 1872, Roughing It was greeted as a work of “wild, preposterous invention and sublime exaggeration” whose satiric humor made “pretension and false dignity ridiculous.” Meticulously restored from a variety of original sources, this text adheres to the author’s wishes in thousands of details of wording, spelling, and punctuation.

The wild humorist of the West

With this volume, Grover Gardner has done all of Twain's best travel writing: Innocents Abroad, A Tramp Abroad, Life on the Mississippi, and now this. Of the four, Roughing It is one of the funniest. It's Twain's account of the six or so years he spent out West, first as an undersecretary to the secretary of the Nevada territory, who happened to be his brother Orion; then as a silver miner and entrepreneur; then a newspaperman, concluding with an extended account of his first travel assignment: a tour of the Sandwich Islands (Hawaii) for a San Francisco newspaper. Without making the slightest effort to impersonate Twain, Gardner captures the spirit of the work flawlessly.

Twain's travel writing is like no one else's on earth. Without batting an eye, he can shift from the most accurate and evocative nature writing to the most outrageous tall tale - and back again. He can be brutally iconoclastic and awestruck by beauty in the same paragraph. (His glowing account of a night-time visit to Lake Tahoe is coupled with the story of how he and his partner managed to burn down several acres of timber on the shore of the lake by accident, destroying their investment in a budding timber concern.)

I'm still shuddering at his tale of venturing into the crater of an active volcano in Hawaii, picking a careful path through partially-hardened lava fields by torchlight.

If you've read Twain's novels and want more, give his travel writing a try. I waited way too many years to do so myself. Roughing It is one of the last I read, and is one of the best.

One of Twain's greatest works

Mark Twain had some amazing experiences, and was obviously very sharp and absorbed everything around him. A better book about the migration Westward, and the goldrush, I cannot imagine. Witty, insightful, and very well narrated by Grover Gardner... I did not want it to end. Caution: this book may not be appropriate for Mormons.

Like many of Twain's travelogues, Roughing It shouldn't really be approached as a narrative with a driving plot. It's a collection of stories and anecdotes told by a master storyteller with a deep empathy for all the goofy characters he's met during his wanderings. It doesn't demand to be listened to straight through. You can stop and start after different chapters, treating each as a kind of short story or vignette that skewers and augments the "Wild West." If you have any interest in the history of the West, this needs to be part of your library as one of the best "on-the-ground" records of life during the Silver Rush and Gold Rush, what the Pony Express looked like in action, how you traveled the interior in a stagecoach, and what Hawaii looked like to someone who had never encountered the jungle. This is the origin story of Mark Twain as a character as Clemens is given the freedom to build his character's identity, and first put Mark Twain to the test in print and on stage.

One of the great pleasures of this recording is the voice of Gardner, whose tone and rhythm capture the prose of Twain and has transformed how I hear the great writer in my head. This is a beautifully produced audiobook and a perfect marriage between author and reader.

The Wild West, Tamed by Twain

There's nothing better than a night curled-up by the fire, with Mark Twain and his eccentric, peculiar, indispensable point of view. Here he tackles desperados, stagecoaches, mountains dappled with snow, the city of Salt Lake, and so on and so forth. It hardly matters what he says, he says it so damn well.

Thoroughly enjoyed this class Mark Twain story of his adventures in The West in the mid 1800s. Narrator did an excellent job reading the book and delivering in a fashion to keep my interest. I even enjoyed the various voices he used. I would highly recommend this entertaining Audible book.

Twain???s travel writing isn???t your standard travel writing. Roughing It is tongue in cheek, sarcastic, fantastic, humorous, wild, and ridiculous. This relates the experiences of Mark Twain???s journey through the west and Hawaii. The narration is excellent, with an excellent understanding of the humor. I really enjoyed the history and texture of the American west. At a few points the humor is a bit dated, but overall this is a fun listen.

"Mormon Bible...It is chloroform in print."

This was the first time I have read this book by Mark Twain and it certainly captures the spirit of the West in the 1860's. He also makes a side trip to Hawaii which is fun and interesting to know what Honolulu was like when still under a King.

My favorite parts of the whole book was his take on Mormons and their religion. He writes an anecdote about Brigham Young having over a hundred children and some man gave one of them a whistle. If you are a parent you will thoroughly understand Mr. Young's agony on this event. Now his wives are pestering him so that their children get equal treatment and a whistle of their own. As a mother of six, I understood this as a real problem.

Mark Twain's wit is sharp and his stories are hilarious in the way they are told. Grover Gardner does a fine narration on this volume.

As with all of Mr. Twain's books there is some racial bigotry that you need to overlook. I think it's better to get the original view than a politically correct version.

"All men have heard of the Mormon Bible, but few except the “elect” have seen it, or, at least, taken the trouble to read it. I brought away a copy from Salt Lake. The book is a curiosity to me, it is such a pretentious affair, and yet so “slow,” so sleepy; such an insipid mess of inspiration. It is chloroform in print."

Brilliant in places, slow in others

This book is good, but not 5 stars. It is early Mark Twain so he definitely got better as time went on. He mostly talks about Nevada, California, Utah, the Sandwich Islands (Now Hawaii). My favorite parts were about the Sandwich Islands, and when he started giving lectures. Twain was very aware of race, religion and class. I know he was anti-slavery so found it interesting that he didn't return to the States from Nevada to join the cause. Maybe someday I'll read a biography of him that'll explain why. It is possible that many of the men out west didn't go back to join on either side.

Twain talks about the Mormons when the religion was only about 40 years old and polygamy was still a common practice. He talked about their persecution and the time they also were the ones committing a massacre. It was a surprise that it was so much on his mind because he included an more as an afterward.

I chose this book because in asking for suggestions from friends and family for my Winter of Listening someone suggested "Life on the Mississippi". But this book was on sale. I know it's practically Summer, but I still have books in my Library and Wish List to listen to!

This is my second Twain book in my adult life. I'll be listening to more down the road, or the river as the case may be.

Also - the narration was excellent!

Seemed to go on forever

Twain is witty and his use of the language is good, but after a while it seemed to go on forever. I thought the best parts were his observations about crossing the continent and his silver mining escapades, which are a period piece of history. Probably not his best effort.

Less than ten minutes into this AudioBook I was suddenly stricken with a fit of laughter so unexpected that I literally fell against the kitchen counter in gales of laughter. This was followed by storm after storm of hysterics and now my neighbors assume that I am taken with the palsy as I walk around the neighborhood with the Dog, chuckling, exclaiming and gesticulating. At one point during a story about being treed by a Bull Buffalo, I had to sit down on a bench to catch my breath. The words of Twain are flawlessly delivered in tone, cadence and dialects by the narrator Grover Gardner. I am transported. I have traveled through and lived in many of the locations in the American West traveled by Twain and each story along his way to the exact place of my 14-year residence in Nevada rang true. I am about 1/3 of the way through and will be sad when it ends.

This is one of those situations where there are competing versions of Roughing It available on audio - and I'm glad I picked this one. Grover Gardner is exceptional. And a book like this is so much better in audio form because with rich dialogue and so many western voices, my own limited imagination certainly couldn't think itself into the voices that Grover conjures up. A real treat.