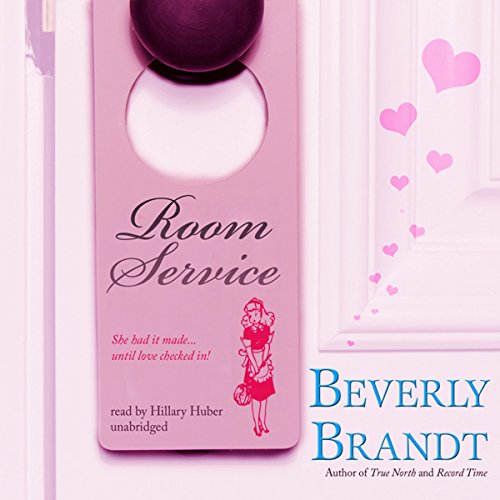 Jet-setter Katya Morgan believes that love comes in gilt-wrapped packages. So when her father disinherits her, her first priority is to get her money and her cushy life back. But meanwhile, having no way to pay the enormous bill she racked up at the sumptuous Royal Palmetto Hotel poses a slight problem. Then Alex Sheridan, the hotel manager, has the gall to suggest that she pay off her debt by working at the hotel—as a maid!

Alex doesn't much care for the spoiled Ms. Morgan at first. But when she dons the uniform and proves her mettle as a housekeeper who cares about more than cold, hard cash, he begins to change his mind. When a rash of disasters befalls his beloved hotel, Alex finds himself dealing with a saboteur, just as he is beginning to fall for the once-spoiled brat who's acting more and more like a real woman every day.

THIS BOOK WAS PRETTY GOOD. ITS ABOUT A WOMAN WHO GET CUT OFF AFTER HER FATHER DIES AND LEAVES EVERRYTHING TO HIS WIFE, HER STEP MOM. ITS AN INTERESTING STORY AND THE END IS GREAT.
WORTH LISTENING TO

It is a litlle like a cookie cutter novel but it is fun to listen to and the reader is decent. Don't be discouraged by the beginning, it is a good time.

A really good chick lit novel unrealistic as a lot of these are everyone is very glamourous and rich but
I loved it. Would love more from this author.

I really enjoyed this audio book. Hillary Huber made the book come to life. Great ending!

I only listened to the first couple hours and just couldn't get into it. The main character is totally unlikable.

This was a bit of a silly story plot; that said, I thoroughly enjoyed it! The narrator did an excellent job too!

Cute character with a little sex thrown in. It's better than most,as far as these things go. The main character, katya, didn't seem too far off from celebutants you hear about today. Entertaining!

I don't mind unrealistic plot twists in romance novels, however, these only work if you have credible, i.e. well developed characters. And these are absent in this book. The leading characters are flat and in the best case drafts.
I was relieved when it was finished. The narration was OK but couldn't save the book.

Katya Morgan was raised to believe that money equals love. Sent away to baording school upon the death of her mother at age 10, her father has always been absent in every way but one. He's always provided her with every material possession that money can buy. And when he dies and disinherits her, even having her stepmother Jillian take back everything that his money ever paid for, Katya is not only devasted, but broke. When sexy Alex Sheridan, the general manager of the premier Royal Palmetto hotel in Arizona, offers her a job in the housekeeping department, Katya knows she's sunk to a new low. Once a guest, now a lowly housekeeper, Katys is truck with the realization of just how much money it takes to survive. Throw in a saboteur trying to take over Alex's job at the hotel, the hotel owners dimwitted son Chris, a slew of Alex's family, and a drooling dog named "Daisy", and you've got a story you're not likely to forget.

easy listening while on a road trip

All good for picking up the story (which was obviously going to be a love story ) after a break .