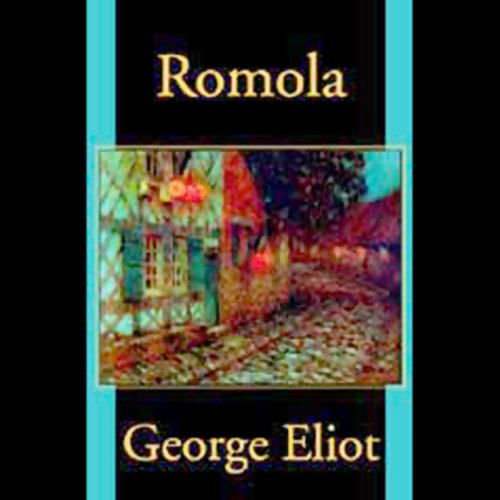 "There is no book of mine about which I more thoroughly feel that I swear by every sentence as having been written with my best blood." Thus wrote George Eliot about Romola, the book that is central in her career as a novelist and among her most colorful, fluent, and persuasive works.

Set in Florence in 1492, a time of great political and religious turmoil, Eliot's novel blends vivid fictional characters with historical figures such as Savonarola, Machiavelli, and the Medicis. When Romola, the virtuous daughter of a blind scholar, marries Tito Melema, a charismatic young Greek, she is bound to a man whose escalating betrayals threaten to destroy all that she holds dear. Profoundly inspired by Savonarola's teachings, then crushed by the religious leader's ultimate failure, Romola finds her salvation in noble self-sacrifice.

"George Eliot's humanity colors all her other gifts — her humor, her morality, and her exquisite rhetoric." (Henry James)

Once I got into this novel, I couldn't put it down, but "getting into it" took some work. Like other Eliot novels, it began with a good deal of exposition and philosophical reflection, which, in this case, led to me abandoning my first two attemtps to listen. But what a reward for persevering! Eliot's description can transport you to 15th century Florence, and her prose often flows like poetry. Contemporary attempts at historical fiction (like "Pillars of the Earth") come nowhere near Eliot's prose, setting detail, pace, and characterization. Her heroine's "self-abnegation" can put off a modern reader, but in the context of the novel's setting and Eliot's own period, Romola is a feminist!

I don't always like Nadia May's narration, but her style was perfect for this novel and she read it flawlessly.

One flaw in the audio files though - There's a chunk of text missing somehere just before chapter 10 (at the start of hour 3 or 4). Eliot both foreshadows and recaps the missing events, but it was a noticeable gap in the flow of the listen.

Also - this listen will probably send you to Wikipedia to check some of the history and characters mentioned. From what I read, Eliot was faithful to the facts (which are quite exciting). I wish my prof for Renaisance History had put Romola on the reading list - I might have retained something from the course by having it fleshed out by good fiction.

A difficult book; well worth the effort!

I am so glad I stuck it out through the first few, difficult chapters. This historical novel is on par with War and Peace in my opinion in the sense that an essential and relevant historical moment is brilliantly rendered along with complex characters in its melodrama. Bravo.

This is actually a very compelling story of historical fiction. The characters are quite interesting. I agree with other reviewer’s at the near ration is a negative. I read this book after a recent visit to Florence and found that the ancient city came alive in the chapters.

Pronounce the title name properly, PLEASE. The mispronunciation is SO very irritating. And the name is repeated in nearly EVERY paragraph.

Not worth the money

I love George Eliot - and have purchased most of her books - but this one is a real disappointment. I'm sorry I bought it.

Has Romola turned you off from other books in this genre?

No - I love Eliot