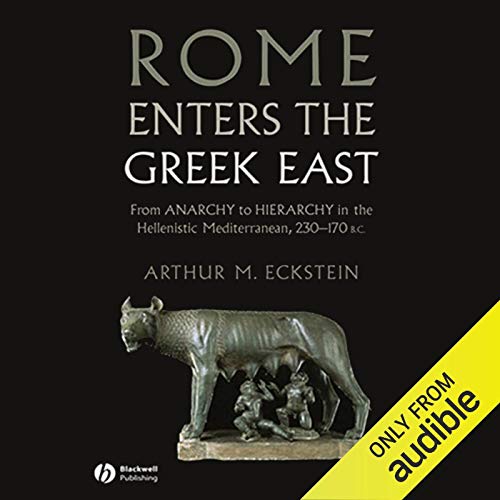 Focusing on the harsh nature of interactions among states under conditions of international anarchy, the book examines the conduct of both Rome and the Greek states during the period, and the beginning of the replacement of anarchy by a situation of hierarchy and unipolarity.

In addition to providing an overview of the entire revolutionary period between 230 and 170 BC, the volume focuses detailed discussion on the geopolitical crisis that convulsed the Greek world in the last decade of the third century bc. This crisis led first to the violent collapse of the traditional Greek state–system based on the three great powers of Macedon, Syria, and Egypt, then to a revolution in Greek diplomacy towards Rome (201–200 BC) as second-tier states pleaded for Roman intervention in the crisis, then to the beginning of Rome's permanent involvement in the high politics of the Greek Mediterranean, and finally to the creation of a situation of Roman unipolarity in the Greek Mediterranean. The first stage of that unipolarity (ca. 190–170 BC) is then analyzed in detail.

Rome Enters the Greek East offers a balanced portrait of Roman militarism and imperialism that is essential reading for scholars interested in the interaction of Rome and the Hellenistic world.

Arthur M. Eckstein is a specialist in the history of Roman imperialism. He has published three books, Senate and General: Individual Decision–Making and Roman Foreign Relations, 264–194 BC (1987), Moral Vision in the Histories of Polybius (1995), Mediterranean Anarchy, Interstate War and the Rise of Rome (2006), and 50 major scholarly articles. He is also co-editing an edition of Polybius' Histories.

"Clearly and engagingly written and augmented by four maps, this book will appeal to students and scholars alike." (Choice, April 2009)

It pains me to write a negative review, especially when I love the material so much but this audio book was truly horrible; in fact I couldn't finish it...a first for me. The two main problems are:

1) The reader follows his own cadence rather than that of the prose. The result is a staccato performance interspersed with bits that have been apparently edited back in, that are so obvious they distract you and make you think you've accidentally hit the re-wind or fast forward button.

2) It seems a decision was made to read the footnotes. Endlessly you hear "in Polybius book 4, chapter 3, paragraph 2, lines 12-17"...this eventually becomes mind numbing and you no longer feel as if you are listening to a book, instead you are in the middle of a lecture where you do not have the course material.

What was most disappointing about Arthur M. Eckstein’s story?

I actually like very much the information contained, it is a very scholarly look at the time period. That is why I am so perturbed at the presentation, I was unable to finish the book.

If you could play editor, what scene or scenes would you have cut from Rome Enters the Greek East?

The repetitive foot notes for sure....just tell us that "Polybius wrote that..." without citing the book, chapter, paragraph and line number incessantly.

Having majored in history and minored in Classics I thought this would be a great bit of history. it is a comparison of of views, past and present, while telling the story of the Roman engagement of the Greek East. It is a bit much and I struggled to finish. Definitely not a well told story or popular telling of the interaction meant for mass consumption.

Great book! I wish I could see the maps

This book really should come with downloadable maps that I can look at so I can follow the geopolitical situation as I listen. That's my only complaint.

You MUST listen to Polybius I & II before this one

This very good analysis of Greco-Roman history can only be appreciated if you read and listen to all of Polybius' Histories and understand post Alexander the Great Eastern Mediterranean. This is advanced and not for those who haven't done the required reading. so don't whine about it. stop being a slacker. Polybius is a must read for serious historians as are a number of Historians before you actually take on a book like this and also courses on Audible. Sorry but the list is extensive. There's probably more I'd listen to than just this as I'd give this book a second read after I took even more time to understand all the history contained in the list below.
Here is the list:
Polybius I & II
Titus Livy
The History of Ancient Rome: Garrett Fagan
The Peloponnesean War: Kenneth Harl
Ancient Greek Civilization: Jeremy McInerney
Augustus: Adrian Goldsworthy
Josephus,
Plutarch
Cassius Dio
Sallust
Tacitus
Suetonius
Thucydides
Greece & Rome An Integrated History: Robert Garland

Academic analysis for those already familiar

This book contains brilliant arguments that thoroughly put Rome's actions in her early wars in Greece into context & paints an authentic picture of informal empire & Senatorial disinterest. For any student interested in how Rome dominated the Mediterranean this is a must read/listen. Though understand it is just one half of the story, or rather one half of the Mediterranean.

Despite a number of negative feedback on here I thought the narrator pretty good. If you've listened to academic works before you'll know how dry they can be. This narrator does a good job with inflections & speech to keep the sometimes long & often repetative arguments interesting.

In terms of prior knowledge you should have a decent understanding of the narrative of Roman expansion & so understand the state of Rome at this time. For example it is taken for granted you know about Hannibal's invasion of Italy. If you have listened to something like Mike Duncan's History of Rome you should be ok to jump into this book. There's no need for degree level study.

There are some weaknesses/caveats you should be aware.

It sounds like after the first recording someone insisted they include footnotes. This means a number of arguments become broken up by references mid sentence & the clunky footnote additions jar from the different audio recording sound. It isn't unbearable & you learn to tune out to that bit but it certainly is off putting.

There is a lot of repetition. That is to be expected in this sort of academic work where arguments are being built but you should be aware, each chapter has a long conclusion which tends to reference previous chapter conclusions.

Whilst the Illyrian, First & Second Macedonian wars are some in great detail the rest of the book (last two hours). Causes of wars with Seluecid Empire & 3rd Macedonian war are pretty light especially compared to the treatment of the early wars in the book. If the author went back & committed the same level of detail to these interactions this would be the definitive book of Republican Rome in Greece. Again this isn't so much a negative against the book as the title itself outlines a focus on early interactions but you should be aware this is not the full picture.