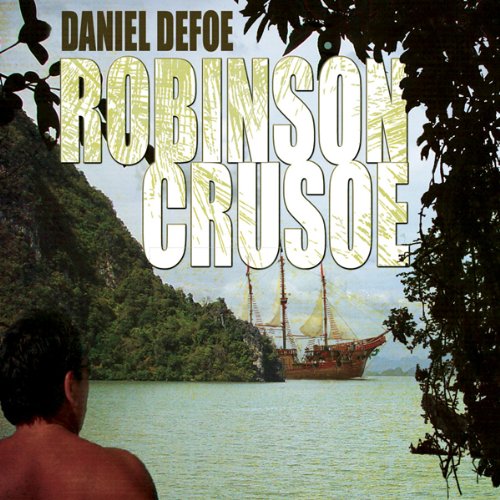 Shipwrecked and cast ashore onto an uninhabited island, Robinson Crusoe ingeniously carves out a solitary, primitive existence for 24 years. Eventually, he meets a young native whom he saves from death at the hands of cannibals. He calls him Man Friday and makes him his companion and servant.

Crusoe and Friday share in a variety of adventures, including a fierce battle with cannibals that culminates in the heroes recapturing a mutinous ship and returning to England.

Based partly on the real-life experiences of Scottish sailor Alexander Selkirk, Defoe's novel of human endurance in an exotic, faraway land exerts a timeless appeal and has taken its rightful place among the great works of Western civilization.

"[One of the few books] 'written by mere man that was wished longer by its readers.'" (Samuel Johnson)

They're "The Classics" for a Reason

I listened after reading 40 years ago and it was everything I remembered it to be! The insights into the period of the days of exploration provide a vivid understanding of what life was like in those days. The narrator was excellent and the story superb! You've always heard about it...now listen!

I have just read this book at the age of 61. I don't think I read it as a child. This is a classic. It seems to me it was written for reading to chldren in a Pre-television era when reading books to children was in vogue. It still should be but I doubt many do it. It is a good adventure story but the thing that makes it somewhat unusual is how full of moral teaching it contains which would be geared at children. Morals such as making the best of what you have, being thankful for what you have, trusting God to provide for you, etc. are deeply carved into the story. As I approach my grandfather years I will remember this book and see if there will be some way to read it to my grandchildren.

A Must Read for Everyone

This book was in our family library when I was a child, and I am so sorry that I have waited far too many years to read this piece of classic literature. It was even better than I had anticipated, knowing that it was so highly revered. I would recommend to anyone that it deserves a read (listen) if, for no other reason, than to fully understand so many of today's references to this wonderful story. However, there are so many other reasons to listen to it. It was exciting, interesting, harrowing, and incredibly well written. The ingenuity of Robin is absolutely fascinating, and the author's descriptions of how he makes do on this island are more than impressive. The writing style was incredibly easy to take in, even when one considers how long ago it was penned, and how different the vernacular was then. Do not think for one minute that this is a staid work of dry English literature. It was as easy to understand as something written in our own time, and as exciting as our thrillers. Wonderful narrator, too. Do yourself a favor and, if you haven't already, immerse yourself in this great adventure. I would liken it to 20,000 Leagues Under the Sea. If you have enjoyed that book, then you will love this. And if you haven't read Verne's novel, I would recommend for that to be the next download if you enjoy Robinson Crusoe

This was great. I thoroughly enjoyed listening to this book. The narrator was very good and made "ye olde english" very understandable. I listen on commute and always looked forward to advancing the story.

Have been reading classics lately and after two books written in 1800's referred to Robinson Crusoe, decided to give it a try and so glad I did. John Lee was perfect voice for Robinson who like a dear friend, confides his life and how he came to spend 24 years alone being shipwrecked on an island. I found the story, his feelings and the events experienced - both believable and entertaining. It is not a swash-buckling adventure despite cannibals, pirates, escape from slavery and sunken ships... it does meander a bit. However, if you enjoy classic books, this is a great, must read.

A Classic for Children and Adults

I enjoyed listening through this story with my 11 year old son. The story is not politically correct in regards to Crusoe's opinion of Friday. THis is easy to get over and to enjoy this amazing tale of surviving alone on an island. This is the original version of the story and gives priority to Crusoe's faith in God. I have read this book several times, and I didn't remember all the detail re his life after he left the island. I am not sure if that is because of my memory or that it is edited out in other 'unabridged versions.

If you like survival stories, this is a classic and worthy of it's place in literary history. Both my son and I would be happy to listen to it again.

I found it a bit of work in the early going, but was well rewarded for following it through to the end. Does a fantastic job of painting what is going on inside the remarkable protagonist.

The depth of the novel surprises and the glimpse of 17th century lifestyle and language is enriching.

Which character – as performed by John Lee – was your favorite?

The growth of the character living in extreme circumstances gives the author an interesting context in which to make his philosophical and theological beliefs known.

John Lee is a superb narrator who I now seek out because of his capacity for nuanced language, accents, and tonality.

Much better as an adult

Where does Robinson Crusoe rank among all the audiobooks you’ve listened to so far?

This book was very good. The story line is excellent and I connected with the hero as well as the other characters. The fortune seeker is there in all of us. This story shows what can go wrong, then right. I liked the spiritual references without being heavy handed about it.

What does John Lee bring to the story that you wouldn’t experience if you just read the book?

The narrator is crisp in his delivery. It creates suspense and interest without hype.

Much better than I expected!

I thought I knew this story, but I was wrong. As the classics go, this one was wonderful. I truly enjoyed the story and the narration. Great job!

So much more to this novel than film versions. The narrator makes you feel as though you are there.