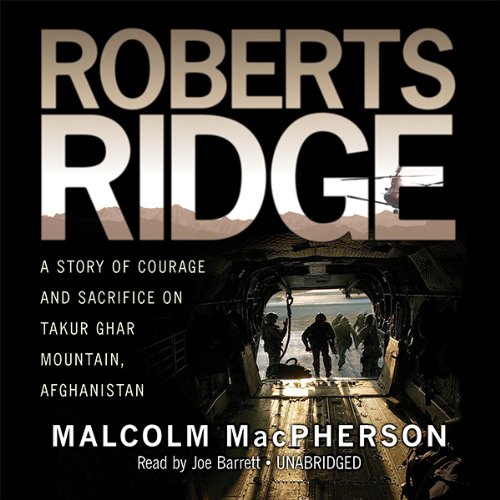 For the U.S. Navy's elite team of SEALs, the mission seemed straightforward enough: to take control of a towering, 10,240-foot mountain peak called Takur Ghar, a key post in their plan to smash Taliban al Qaeda in eastern Afghanistan. But the enemy was waiting, and when the Special Forces chopper was shredded by enemy fire, a red-haired SEAL named Neil Roberts was thrown from the aircraft. Roberts's fellow SEALs were determined to bring him out - no matter what the cost.

This harrowing true account based on stunning eyewitness testimony and painstaking research captures in dramatic detail the 17-hour battle fought by a few dozen warriors against near impossible odds to save one of their own.

©2005 Malcolm MacPherson (P)2008 Blackstone Audio, Inc.
"Well told and frightening as well as true, this is a book that bridges the breach between the increasingly professional American military and a civilian culture possessing little knowledge or experience of the military." ( Booklist)

This story is simply an accounting of events that when assembled offer a good perspective on the prominent aspects of a recent conflict. The last half hour is a good summary of the total span of the events. Do not go into this story thinking that your going to get something other than a cold hard retelling from several perspectives of how the event took place. The author likely made use of interviews that were already conducted by a War College investigator. In the end it is a first rate accounting, complete with a human perspective of the soldiers. It most certainly was presented in a balanced manner. When the same mistake is repeated, even in a combat situation, there is no way to sugar-coat the reality. But, as it is clearly mentioned, this is part of the essence of combat....chance circumstances and/or the "fog" of war. I find that with war stories, because the subject can be infused with emotional perspectives, many reviewers let this color their reading of the story, and misinterpret the story. This story is clearly as reliable as combat accounting can get. Take it for what it is, and enjoy it. Otherwise......

I am not often critical but...

Would you be willing to try another one of Joe Barrett’s performances?

Yes, if he promised to just read the book.

I am not often critical of books and narrators and I realize that it was probably not Joe Barrett's idea to try the accents, but they were bad. After a few chapters I found myself thinking I wish I was reading this book and not listening. The sad part is that it is a very well done book, and the bad performance by the narrator is bringing the book down. If you can get past the bad accents by the narrator it is worth the listen.

This book chronicles a harrowing 17 hour event on a remote Afghan hilltop. Unfortunately, the reader's performance was dreadful. His attempt at various accents throughout the book was awful and quite distracting. Another performance tragedy was awkward pronunciation of common military terms. This is one of the rare selections that does not benefit from the audiobook format and would be best left as a traditional paper book. I feel somewhat guilty leaving such a harsh review considering the event and men this book is based upon, but the reading performance made listening to the entire book a disappointing chore.

This book, with a brilliant combination of writing and reading, conveyed (to me at least) the fog of war and confusion of battle more vividly than I've ever experienced before. So compelling, I listened to the whole thing in 2 days (a long plane and car journey helped) not bad for a 24 hour book. I ended up proud of our guys, our military capability, and out determination to leave no one behind. But also hoping we can figure out better communication devices in the near future. A great read (listen) that I heartily recommend to anyone with the stomach for it.

From someone who IS military (not someone who has "read a lot" about the military) this book was exceptional. It was hard to hear in a way, because from a hindsight perspective there were so many things that went wrong (which is what "After Action Reviews" are for), it IS tough to believe it all happened. The book separates perspectives, which I could see where someone would find that confusing from a book/story standpoint, but that separation does an exceptional job of portraying what actually happens on the real battlefield. Incomplete and missing information, poor/missing communication, and snap decisions are a part of the real battlefield. There is an element of time included in the book, which in my opinion, is invaluable to portray how quickly things can happen & go wrong (even with preparation). The personal stories of the individuals involved added a nice aspect to the book, and were honorable...but were bastardized by the narrator's decision to attempt bad accents. I would include it on a "must read" list for all in the service as well as anyone interested, not just from the fact that it is a courageous story, but by far more important, a much better depiction of how a real battlefield dynamic can develop (and unravel). I would recommend it to any/all the overly judgmental "sideline sitters" and intellectuals who like think they can criticize our military for any "on the ground" decision...but they won't read it. It does not portray our soldiers in a disrespectful manner, and at no time did I feel attacked/insulted during the book.

This is a great Book. I would recommend it to anyone. I love true stories and this is a great one. This tells you how things can go terribly wrong in a short period of time and how men pull together to survive those times. It is a must Book to listen to.

this book tries to make the seals look good

overall this is a great book however you can tell that is trying to put the seals in a great light on an operation where they were the root cause of most of the issues. their leadership and the leadership in the rear is the whole reason this episode happened. they try and dispel The fact that airman Chapman earned a medal of honor for his actions, saying it was just wishful thinking and Lazarus syndrome. it is honestly pretty disgusting to see that in a book, the great part about this story is talking about the ranger QRF Force it's covered better here than in most other books about this battle.

The narration is for the most part done extremely well however the pronunciation of certain locations in Afghanistan or certain military equipment is way off.

I heard of this book by a fellow Veteran of the United States Military. This book is riveting. The author puts up on the mountain. He puts you into the firefights. You can feel the pain from those injured and those watching their brothers suffer. While you are up on the mountain with the US Army Rangers, you can you can just about feel the bullets whizzing by past your ears and over your head. For me, I was frustrated because of the confusion in the communications between Headquarters and the boots on the ground. Where was the urgency to rescue the Navy SEALs? War is hell. I am saddened by the deaths during this battle. I am glad that the losses weren't worse. As I always say, I injury is too much. I death is devasting. This is an OUTSTANDING book. I highly recommend it to every American.

good overall story of the battle. Tells more of the story beyond the seals. Listeners should follow this up with Alone at Dawn for a more updated version of the early events of the battle and the medal of honor recepeiant

I feel proud to know Slab as he is a great man. This book made me feel as if I were there withese men. I felt there pain.

'Robert's Ridge' is an absolutely gripping read. The structure of the book is broken down into sections within chapters with each section describing the same events as seen through the eyes of each member of the rescue teams during events covered in the chapter. This is not confusing and instead has the effect of brilliantly describing the often fast paced events during combat that make this book a real nail-biter which you won't want to put down.

'Robert's Ridge' offers some of the best writing I've seen and suits the subject matter perfectly. If this wasn't a true story, you'd think you were reading a Tom Clancy novel! The writing also offers depth in telling the reader something of the personal histories of many of the more major characters with often touching and sometimes poignant stories about who they are. Thus, the reader is introduced to the essence of many of the people involved which serves to strengthen the powerful narrative.

Suffice to say that this title will leave you amazed at its vivid depiction of fast-paced life and death events that occurred atop this distant mountain peak in Afghanistan.

Top listen, get it!