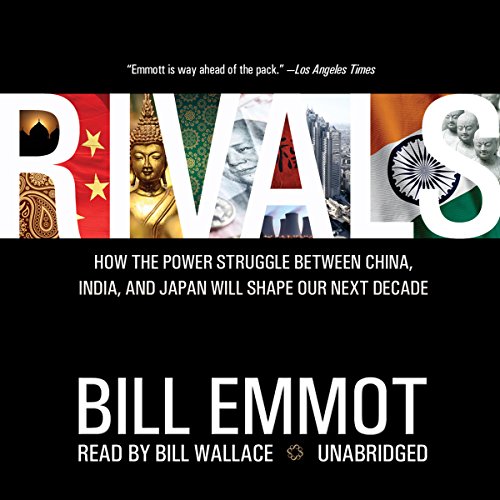 The former editor-in-chief of the Economist returns to the territory of his best-selling The Sun Also Sets to lay out a fresh analysis of the growing rivalry between China, India, and Japan and what it will mean for America, the global economy, and the 21st-century world.

Closely intertwined by their fierce competition for influence, markets, resources, and strategic advantage, China, India, and Japan are shaping the world to come. Emmott explores the ways in which their sometimes bitter rivalry will play out over the next decade—in business, global politics, military competition, and the environment—and reveals the efforts of the United States to turn the situation to its advantage as these three powerful nations vie for dominance. This revised and updated edition of Rivals is an indispensable guide for anyone wishing to understand Asia’s swiftly changing political and economic scene.

"Rivals: How the Power Struggle between China, India, and Japan Will Shape Our Next Decade" is Bill Emmot's take on the emerging global village. While the focus of the book is on the competition between China, India, and Japan, he actually includes Brazil, Russia, India, and China (BRIC) in the mix along with the US and Japan. There are many insights there an analysis which is interesting. The downside of this book is two fold. First, much has changed since 2008. The discussion of Japan is helpful, but misleading given the recent devastation. Second, the last summary chapters really focus on global warming and US involvement in that debate. It just didn’t seem germane to the purpose and tenor of the book. Well written, the book is read well by Bill Wallace. A more contemporary offering will be more valuable, however.

The purpose of this book is to look forward to the coming decade and predict what may happen in Japan, India and China, and between those three powers. Unfortunately, the book was written and completed in 2007, so the decade that it seeks to foretell has actually already ended. We do not find out whether the predictions were accurate.

That said, this is an excellent study of the politics, recent history, and economies of the three subject nations. The writing style is very accessible, which is not surprising since the author was a correspondent for the Economist, and later its editor-in-chief. He has spent a lot of time in all three countries, especially Japan, and research is excellent.

So, if you want a recent history of this region (if you can even say these three countries inhabit a single region), this is well worthwhile. If you want something more contemporary, you may have to look elsewhere.

I didn't like the tone of the book. Bush is a moron with no redeeming qualities, and Obama is a hero.