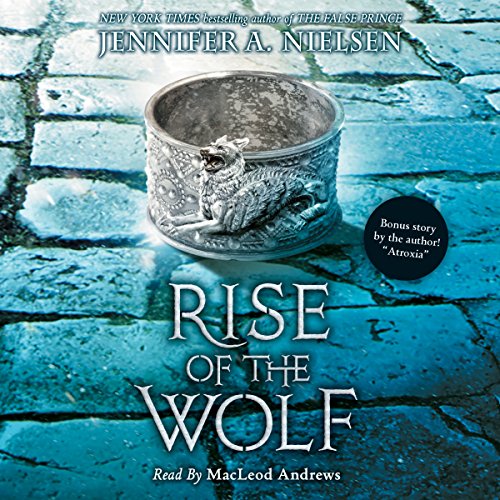 Rise of the Wolf

New York Times and USA Today bestselling author Jennifer A. Nielsen brings a new dose of adventure and thrills to ancient Rome in the second book of her magical Mark of the Thief trilogy!

Nic may have escaped enslavement in the mines outside of Rome, but his troubles are far from over. The Praetor War--the battle to destroy Rome from within--is in full force, and Nic is caught in the crossfire. The secretive Praetors are determined to unlock a powerful amulet--one sure to bring the empire to its knees. Worse, the Praetors believe Nic holds the key to finding this amulet, and they will stop at nothing to steal it, even if that means harming the people Nic holds most dear.

When the Praetors capture Nic's mother, Nic knows he must do anything to save her. He challenges the Praetors to a chariot race. If he wins, they will release his mother. But if he loses, he must hand over a magic that will certainly destroy Rome and end his own life. Can Nic once again harness his magic and gather the strength to defeat his enemies? Or will he lose his mother and bear witness to Rome's destruction?

OMG, Can't put the book down

Just like the first book I could not put this one down. I have enjoyed everything about the story, characters and especially the pace.

LOVE IS, second time reading this. Jennifer A. Neilson has inspired me to start writing my own book

find myself rooting for the bad guys. The main characters constant whining and moaning about not wanting to trust anybody drives you nuts. He spends more time working himself into trouble then accomplishing anything and complains about it the whole time.

I like the different use of magic and how mystical animals were also included in the story.

I teach Roman history in 3rd grade and it was fun to find this book set in the time of the Roman Empire. Creative story, believable characters, all entwined with Roman history.

good narration. And a plot that keeps you listening. can't wait for the next book.