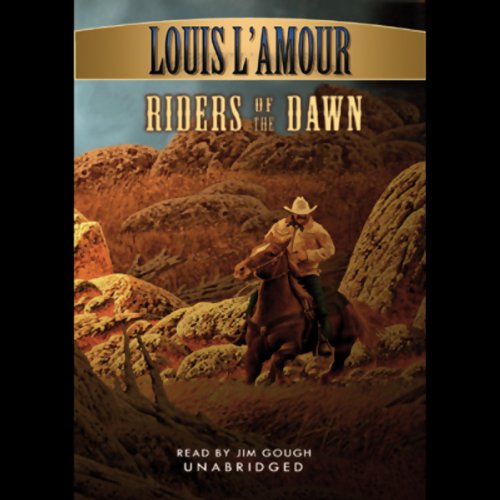 Early in Louis L'Amour's career, he wrote a number of novel-length stories for "pulp" western magazines. "I lived with my characters so closely that their lives were still as much a part of me as I was of them long after the issues in which they appeared went out of print," he said. "I wanted to tell the reader more about my people and why they did what they did." So he revised and expanded these magazine works to be published again as full-length novels. Here is one of these early creations that have long been a source of great speculation and curiosity among his fans.

In Riders of the Dawn, a young gunslinger is changed for the better by a meeting with a beautiful woman. A classic range-war western, this novel features that powerful, romantic, strangely compelling vision of the American West for which L'Amour's fiction is known. In the author's words: "It was a land where nothing was small, nothing was simple. Everything, the lives of men and the stories they told, ran to extremes."

I don't know how he does it, each story is different, yet in all, one has the feeling of being there, right along with our hero. Whether listening or reading each character and setting can clearly be seen through the mind's eye. No wonder he's called the best story-teller of all time.

"Riders of the Dawn" is different than most of his stories I've read, with a woman playing a prominent role in the story.

The narrator gave a good performance.

I highly recommend it to all Louis L'Amour fans--and future fans.

Boy! That was a fantastic story. Louis L'Amour

Would you consider the audio edition of Riders of the Dawn to be better than the print version?

Yes. I think I get more out of it with the audio version.

What was one of the most memorable moments of Riders of the Dawn?

The big fist fight I guess was the best.

What does Jim Gough bring to the story that you wouldn’t experience if you just read the book?

He is good at telling a story, and made it interesting that held my attention.

No I had to brake it down to three sittings.

Louis L'Amour's books are always good to read or to hear being read. I have read most of his stories, a lot of them when I was in Korea in the Army. We sure miss you Louis L'Amour.

This Louis L'Amour story was a wonderful example of the good old westerns. I recommend this book since the narrator made it feel like you were right there on the range.

Been a great movie to feature John Wayne and her! Great narrator, production and great story!

why the title and name change

I read this story under the title Silver Canyon. Both the main character and girl had different names. Parts of so
one chapters were left !

Gough’s voice is a perfect fit for western stories.

I think Jim Gough’s voice is a perfect fit for western stories and this one was no exception.

The narrators voice made it hard to follow the story line. We have many Louie Lamour audio books but we have never heard this man before. I hate to give my favorite author such a low review.

Nothing too extraordinary to be found here. Basically a three way struggle to control a town and the surrounding cattle ranges. There was a bit of a murder mystery vibe to it which was pretty interesting. They way the protagonist basically tells the love interest she’ll marry him certainly wouldn’t fly today.

This book is a comic book

Louis Lamour’s work is certainly dated,but what makes it dated is that he often wrote in prose that had nothing to do with the period of time he was writing about.
For instance, writing that a character made “an excited utterance!” Is cringe worthy.
This is also one of the worst story lines of any of the many audible books I have purchased.
Listen to the last gun fighter series instead

The scenes ran together and the narrater did not adequately differentiate between characters, making many scenes very confusing.