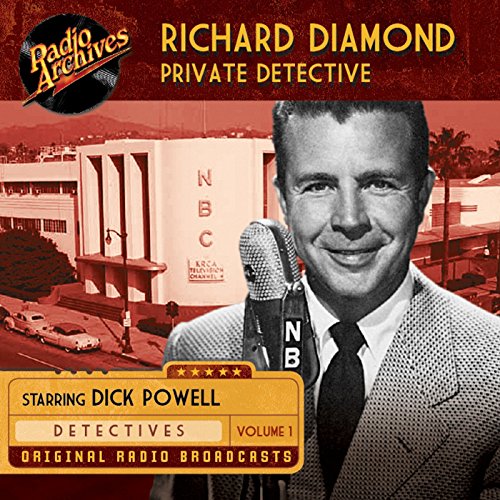 Created by Blake Edwards, Richard Diamond, Private Detective came to NBC Radio in 1949, starring film actor and crooner Dick Powell. Powell had recently played Philip Marlowe in the popular RKO film Murder, My Sweet and jumped at the chance to play a suave detective on the radio. Diamond was a lighthearted, New York - based private eye who enjoyed ribbing the cops and singing songs to his millionaire girlfriend, Helen Asher. Its theme, "Leave it to Love," was whistled by Powell at the beginning of each episode.

Powell's production company, Four Star Television, produced a version of Richard Diamond, Private Detective for CBS in 1957. The lead role went to David Janssen, who would later gain fame as Dr. Richard Kimble on The Fugitive. Sam, Diamond's beautiful secretary, was only ever shown from the waist down. Those beautiful legs belonged to Mary Tyler Moore, as well as other actresses.

Episodes include "The Ralph Chase Case," "The Stolen Purse and Counterfeit Ring," "The Betty Moran Case", "The Rene Benay Protection Case", "The John Blackwell Case", "A Christmas Carol", "The Doug Saxon Case", "Timothy the Seal", "The Elaine Tanner Case", "The Jewel Thief", "The Cop Killer" and "The Louis Spence Case."