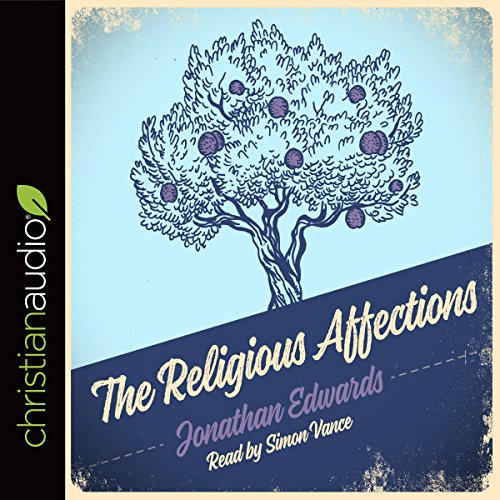 Quite possibly, one of the most important books ever written by the greatest American theologian. Some of the questions asked are "What is the nature of true religion? What are the signs of a true revival? How is the heart changed? Edwards used his pulpit and his leadership of the Great Awakening to pen one of the most challenging and inquisitive books written.
©2007 Jonathan Edwards (P)2007 christianaudio.com

What did you love best about Religious Affections?

The density and balance of Edward's thought stuck me as both beautiful and challenging. As an Anglican reader I found his Biblical fidelity deeply satisfying with very few cited passages on which I might question his approach. In other words, there was a time or two in which I thought his theology or his present purpose might have skewed his understanding of the text rather than having the text support that purpose or theological tack, but none so egregious that specifics come to mind.

He speaks very clearly and captured very well what seemed to be Edward's sentiments in the subtleties of his inflection.

Frankly, the Puritans (and their progeny) are a difficult read for those in our culture who are accustomed to sound bites and 30-second blasts of information. Following the lines of reason can be arduous as Edwards has no problem developing a matter from his or someone else's standpoint for several minutes at a time. While Vance is superbly clear, his quick cadence mixed with the density of the material, not to mention his U.K. accent (I'm a New Englander living in the Mid-Atlantic US) made it so that it took me nearly half of the work to really get into the presentation as a whole. I love Vance in Chesterton's Orthodoxy, though. I attribute my difficulty more to the material than the read, but a slower pace seems like it would have made the product a little more accessible.

Edwards is difficult to read but contemplation on his writings is important for anyone who would like to understand the nature of genuine faith.

James states that "pure and undefiled religion in the sight of our God and Father is this: to visit orphans and widows in their distress, and to keep oneself unstained by the world" (chapter 01, v. 27). Jonathan Edwards, in this well grounded essay, shows the biblical concept about true religion. The Scripture is his object of work. The christians are his audience. His argument gives emphasis in the fruits produced by a christian whose life belongs to Jesus. In order to recognize this, one has to be aware of the false prophets and must not trust in his feelings. "The heart is more deceitful than all else and is desperately sick; who can understand it?" (Jeremias, chapter 17, v. 9) Man has to search and develop the wisdom from above, with "is first pure, than peaceable, gentle, reasonable, full of mercy and good fruits, unwavering, without hipocrisy" ( James chapter 3, v. 17). The author's exposition definitely suceeds in showing the meaning of true religion.

The strength and brilliance in this book is incredible. The way he exposed my sin was convicting.

This is a hard but beneficial listen

It's hard to follow the writing itself seems to make hard work of things by being really thick, but the content therein is challenging and good for Christians who are keen not to be deceived in their own heart. I read the first part of this audiobook and went to a bible study, and their found I was picking up on things that were esteemed as a sign or imprint or imparting of God and his grace in our eyes, but this book explains how it is not always the case.

I bought this audiobook because my eyes easily get tired nowadays, and boy, how much it help a lot. The narration in very, very consistent. The intonation and the pitch never went too high, and it was pleasant without losing the power of the original text. Praise God for the narrator.
The book itself is good - and it will remain so for a long time. The book is an inquiry into affection, which in Jonathan Edward's own word "the more vigorous and sensible exercises of the inclination and will of the soul." The book describes affection so throughly, that I think it's still relevant two centuries later. This book is a must read for every Christians.

Not as valuable as I had hoped for the time spent.

Unfortunately I didnt find this work as helpful as other Christian classics. While it was certainly a good extended discussion of the single topic of the unique heart affections of the Christian, it seemed very repetitive. Edwards was anything but sussinct in his writtings. I much preferred books like Calvin's Institutes even though they were 10x the length. I believe the narriator did a great job with this book even though it was not as good as I had hoped.

Power House of Faith and Truth

I highly recommend this book for more mature Christian's as it is full of meat.

how can we be saved and be the same? our wants, our affections, our ambitions... they are all redeemed when our soul is saved. how deep does that grace run? superficially? not if it is of the Lord... it changes the nature of our being.... complete transformation. what a great book!