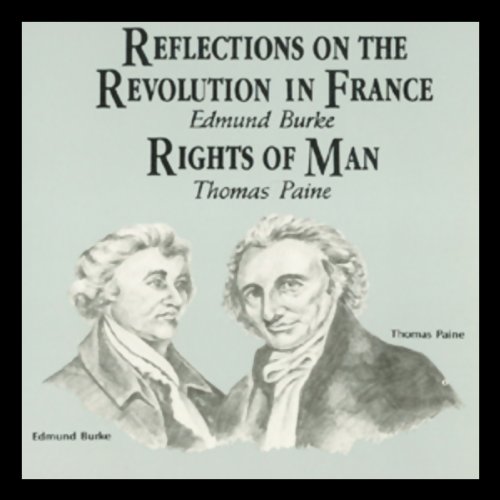 The Giants of Political Thought series is an easy and entertaining way to broaden your mind and your awareness of great ideas.

Reflections on the Revolution in France is a slashing attack on the French Revolution by one of Britain’s most famous statesmen. Liberty and social order, Burke argues, are maintained by the traditional rights and duties embedded in custom and law. And when these traditions are overthrown in revolutions, society is threatened with chaos, bloodshed and despotism.

In Rights of Man, Thomas Paine argues that the French Revolution was based on the same principles as the American Revolution: natural rights, an implied “social contract,” and the right of revolution against oppressive governments. Paine, unlike Burke, sees government as the primary threat to social order. He has little regard for traditional institutions, if those institutions are oppressive and unjust.

I want the real Burke book unabridged on audible. George Smith totally discounts Burke's forethought and foresight on the mess that was to become the French Revolution. Burke's book itself is insightful, but Smith's take on it was not. I do not recommend this book.

If you are looking for audio versions of Burke's or Paine's classics works mentioned in this title, be advised: THIS IS NOT IT! I was quite disappointed when I realized this was simply a very short book "about" these classic texts. And not a very good one at that.

If you are looking for mediocre commentary on Burke and Paine, then have at it. If, however, you actually want to listen to either of these greats, you will have to go elsewhere.

This is not the two works in the title. I bought them thinking they were but this is about those two works. It is very very helpful to listen to prior to reading either of the two works. Smith does a good job of summarizing. It is instrumental to understanding the works.

Would you try another book from George H. Smith and/or Craig Deitschman?

Would you be willing to try another one of Craig Deitschman’s performances?

The use of stage accents for persons of non-English origin detracted significantly from the value of the work in my eyes. It's written in English; just read it in English, either standard British or standard American.