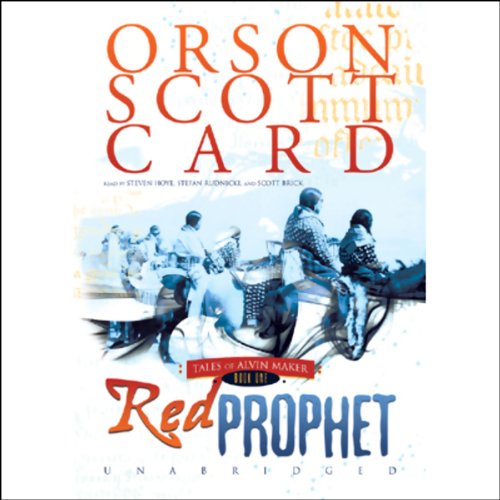 In this thrilling sequel to Seventh Son, Alvin Maker is awakening to many mysteries: his own strange powers, the magic of the American frontier, and the special virtues of its chosen people, the Native Americans.

Alvin has discovered his own unique talent for making things whole again. Now he summons all his powers to prevent the tragic war between Native Americans and the white settlers of North America.

"Suddenly the saga of Alvin Maker begins to thrill." (Washington Post Book World)
"Set in an alternate world steeped in natural magic, this sequel to Seventh Son continues to demonstrate the author's love for American folklore. Recommended." (Library Journal)
"Harsher, bleaker, and more mystical than Seventh Son, this novel superbly demonstrates Card's solid historical research, keen understanding of religious experience, and, most of all, his mastery of the art of storytelling." (Booklist)
"Red Prophet is but a section of a vast American fantasy epic. It is vividly written, and the principal actors (Alvin, Ta-Kumsaw the Prophet, and Alvin's Gandalfesque mentor Taleswapper) are all complete and memorable characters." (Philadelphia Inquirer)

By the grace of some higher being I have been blessed by two great series from the same Author. Orson Scott Card has been the writer of my twenties and hopefully as I turn Thirty (two weeks from now) he will continue for another decade (at least). I started this unabridged version of Alvin Journey Maker mere minutes after finishing it's predecessor (the time it took me to jump to my laptop, search in Audible and pay for the @#$@ thing :) and with the sad knowledge that there was no unabridged book three. After a week of driving and listening, and driving for the sake of listening (and ignoring 'Husband' for the sake of listening) I finished this exquisite movie of characters and adventure to find that only five days before, the third book, Prentice Alvin, had been released.
So instead of telling you how great, wonderful, fantastic and interesting this book is (well DUH!) I'd like to send a message to the Author, and the narrators of this series (and the Ender series because thankfully you guys stick together). You are all brilliant (though I still can't tell you apart), your readers love you and Please Please Please continue the wonderful work.

Felt like a rushed conclusion though. I Loved the analogies Card presented. looking forward to listening to the next one. The readers are superb.

Great mix of religious beliefs with superstitious and supernatural. each chapter leaves you wanting more.
Big dreams of hope for a better future with understanding and tolerance, a need for learning to make the dreams come true.

narrators were on point. story is enthralling. another great work from orson scott card.

Well read story as always. Very emotional story with a good story line. This series is an imaginative and well thought out story.

This is a pretty good book but book one is better, and if you have not listened to book one. Then do not bother for the storyline would be confusing and jumbled. All things considered I enjoyed this book.

Card at his best!!!!! Addictive as the ender series with a much different twist.....Off to hear book 3 can't wait

Would you consider the audio edition of Red Prophet to be better than the print version?

I have not read the print version of this book, but I enjoyed the audiobook very much.

An original look at american history.

Yes, because of the look it gives you at our nation's history.

Which character – as performed by the narrator – was your favorite?

If it was done properly.

Red Prophet is the second book in Orson Scott Card’s THE TALES OF ALVIN MAKER, an alternate history set in a frontier America in which folk magic is real. In the first book, Seventh Son, we were introduced to the main protagonist of the series, Alvin Miller who, because he’s the seventh son of a seventh son, is a gifted healer. We meet Alvin as a baby and follow him into boyhood. At the end of the story he has a vision of a shining man who gives him moral guidance.

In Red Prophet we learn that the shining man is Lolla-Wossiky, an alternate version of Tenskwatawa, spiritual leader of the Native American Shawnee tribe. His brother Tecumseh is their chief. While Card focused on the religious implications of a magical American frontier in the first book, the focus here is on the interaction between the “Whites” and the “Reds” and culminates with The Battle of Tippecanoe.

At the beginning of the story, William Henry Harrison, governor of Carthage City, is dealing with the Native Americans his own way — with poison. He purchases huge quantities of whiskey and sells it to the “Whiskey Reds.” Because they have a low tolerance for alcohol (it’s genetic), they become alcoholics and many die. Andrew Jackson is disgusted with Harrison’s sneaky tactics; he wants to do the more honorable thing and just shoot them all.

Tecumseh, who realizes that alcohol is killing his people and knows of Jackson’s plans, decides to lead his people against the Whites. He allies with the French in Canada, led by the effete Marquis de Lafayette and Napoleon Bonaparte (yes, Napoleon’s in America). Lafayette, however, has his own agenda. He secretly loves the idea of democracy and he admires the American spirit. He wants to use Bonaparte to bring democracy to France. (This storyline is amusing, especially when read by the narrators I listened to in Blackstone Audio’s version.)

Alvin Maker, who is on his way to his apprenticeship, meets Tecumseh and becomes involved with the war. Not only is he instrumental in affecting the outcome of The Battle of Tippecanoe but, with the help of Lolla-Wossiky, the Red Prophet, he sees visions of possible futures and learns more about his powers.

Orson Scott Card is a great storyteller and he’s got a big imagination. This alternate history is exciting, entertaining, thoughtful, and occasionally humorous. I thought Card’s depiction of the Native Americans’ magical connection with the land was beautiful and makes for a lovely American mythology. Many “Whites” who read Red Prophet will feel ashamed at how the Native Americans were treated by our ancestors. Some readers have accused Card of being racist (anti-European), but I didn’t feel this way and I noted that Card gives us many Caucasians to admire and shows us that not all “Red-White” interactions where destructive.

Orson Scott Card is particularly good at voice, dialogue, and character nuance. His heroes are capable of doing evil and his villains can have good motives. Characters don’t always do what we expect them to and there are times when we might even change our minds about how we feel about them. I look forward to seeing these characters grow throughout the series.

I’m listening to Blackstone Audio’s productions of THE TALES OF ALVIN MAKER which is performed, in alternating chapters, by Stefan Rudnicki, Scott Brick, and Stephen Hoye. All three of them are excellent readers. I’ve already purchased book three, Prentice Alvin, and book four, Alvin Journeyman, on audio.

Red Prophet, first published in 1988, was nominated for a Nebula and Hugo award. It won the Locus Award for Best Fantasy Novel.

Second time with this series. I am thrilled that it is an excellent presentation. Highly recommended.

I enjoyed this book very much. It has memorable characters and wonderful images as well as horrific yet put into a clear context.

This book is a step up from the first book of the series, "Seventh Son". Whereas the first book seemed to be setting the groundwork for the series and relating Alvin Makers origins, this book contained more story in its own right and was thoroughly enjoyable from start to finish. As with all OSC books, the atmosphere and feel of the book is beautifully crafted so you feel immersed in the alternative world. This is assisted by the excellent narration by a great team. This series is shaping up to be of comparable standard to the Enders Series. Highly recommended.