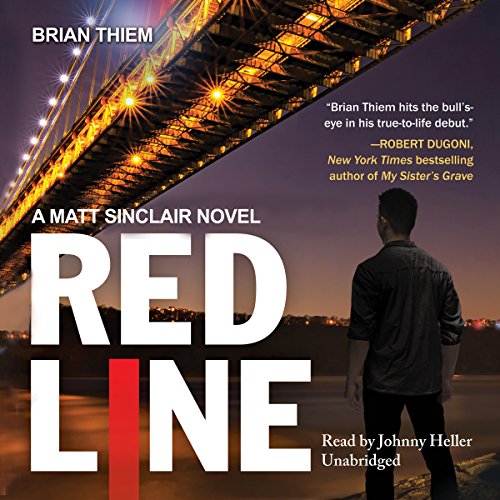 When a teenager from a wealthy suburb outside Oakland is dumped at an inner city bus stop, homicide detective Matt Sinclair catches the case. It's his first since being bumped to desk duty for a bust that went south - fast. With few leads and plenty of attention, it's the worst kind of case to help him get back up to speed.

And it only gets worse as the bodies start to pile up - first at the same bus bench, then around the city. Sinclair is unable to link the victims to each other, and the killer is just getting started. Time is running out for Sinclair's career, not to mention for the people closest to him.

With Red Line, Brian Thiem, a veteran of the Oakland police department and the Iraq war, has written a nuanced police procedural filled with the kind of insight that could come only from a detective who has walked the streets and lived the life.

Have you listened to any of Johnny Heller’s other performances before? How does this one compare?

Very very good police procedural mystery thriller. Basic story is teens are being killed and left in not too difficult to find places. They start out mimicking a crime and tragedy that took place the previous year but then seem to take a detour. It's not until the hero Matt Sinclair begins to put it all together that you become aware of the motive and the madness.
I was able to figure out the who almost as soon as the character was introduced but not the motivation until much later.
HIGHLY RECOMMENDED.
If you found this review helpful please indicate so.
Thank You.

I am a retired Oakland cop. Loved the storylines the the visit to the past.