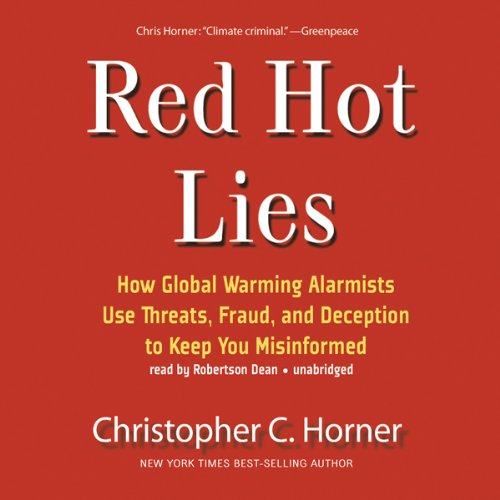 From the author of the New York Times best-selling Politically Incorrect Guide to Global Warming (and Environmentalism) comes Red Hot Lies, an exposé of the hypocrisy, deceit, and outright lies of the global warming alarmists and the compliant media that supports them.

Did you know that most scientists are global-warming skeptics? Or that environmental alarmists have knowingly promoted false and exaggerated data on global warming? Or that in the Left's efforts to suppress free speech (and scientific research), they have compared global warming dissent with "treason"? Shocking, frank, and illuminating, Chris Horner's Red Hot Lies explodes as many myths as Al Gore tries to promote.

Thirty years ago I believed in "global warming". As I began to value knowledge more than beliefs over the years, I became a skeptic. This is a hyperbole filled mishmash with a political bent, and unfortunately it will not convert the believers.

I really enjoyed a thoughtful and well thought out argument that was made convincingly with a sense of humor. Makes you want to get out there with your own Powerpoint presentation and challenge the youth of your city about their "strongly held beliefs".

What happened to critical thinking skills in this country?

Who is telling me Red Hot Lies?

I want to believe in Christopher C. Horner. A least the so called global warming is overrated.
Anyway is a pleasure to listen some convincing one from the other side.
But, seven billion in Earth? This is beyond over. You will see what they will do to the Seas.
Worth listening. Also Robert Dean is good.

Unfortunately this book does nothing but bash the scientists who agree with Climate Change. Not much evidence is shown to support the authors claims of a terrible conspiracy theory other than anecdotal miles of text.

when science becomes a religion all facts are left out and I replace with subjective religiosity. climate change and global warming is now a religion you cannot reason with those that believe it and have no facts to back up their belief. this book proves the zealotry of the global warming climate change movement with facts and reason as opposed to zealotry and rage against those who might disagree using science as their guide.

Well researched and presented. A sobering glimpse into the scientific dishonesty and political hijacking of the UN, IPCC. The appalling enthiastic participation of useful "so-called" climate scientists is well documented.... in context. Very surprised this book made it to print. Feel like I need a shower after reading this. The stink of IPCC corruption is overwhelming, but not unexpected.

This book reminds me of the logic of flat earthers. The author cherry picks stories and opinions to "prove" that global warming is a hoax. The science is clear and the "liberal media" is not biased. We are facing a long term crisis. We ignore it at our peril.

Gives a lot of perspective and insight into the climate debate. What is happening behind the scenes.

Where does Red Hot Lies rank among all the audiobooks you’ve listened to so far?

Among the best non fiction.

What other book might you compare Red Hot Lies to and why?

State of Fear because it deals with the same subject.

This should be required reading in high schools and universities in order to balance the unending assertions that the science is settled. It is not!

The book if full of annoying factual errors which detract from the point I thought he was trying to make - that the media exaggerates and never corrects. But it hard to take the author seriously - talking about the problems of an alarmist culture, a relatively serious point, if his own information is fatally flawed.