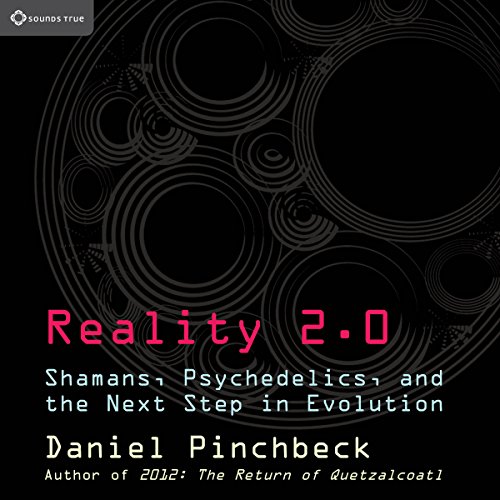 What is it that attracts shamans, mystics, and other visionaries to the experience of altered states? It is the fact that some wisdom cannot be accessed through ordinary consciousness alone, proposes Daniel Pinchbeck. In Reality 2.0: Shamans, Psychedelics, and the Next Step in Evolution, this trailblazer of nonordinary reality shares a firsthand account of his quest for a "system upgrade" for human society.

Join this 21st-century explorer and philosopher-journalist for an intriguing investigation of:

Is our culture poised for the next leap in human evolution? How is technology changing us? Are we in the midst of a global "quickening" that will transform our individual and collective consciousness - and are heavy psychedelics required to participate? Daniel Pinchbeck tackles these questions and more in this fascinating glimpse into a hopeful - and mind-expanding - future.

This is basically a podcast or interview with the author. The material is interesting but the format is strange.

This is a short book... In fact it is not really a book, but a series of reflections by the author, Daniel Pinchbeck, on psychedelics, shamanism and the future post 2012 'end of the Mayan calendar', with reference to his previous books "Breaking Open the Head" and "2012: The Return of Quetzalcoatl". The most interesting part for me was Pinchbecks first hand experiences with the Bwiti tribe in Africa taking Iboga, and with the Secoya of Ecuador drinking Ayahuasca in a ritualistic setting under the guidance of local shamen.

His review of the literature is excellent, and he makes a strong case, quoting previous authors such as Walter Benjamin and Aldous Huxley for the value of psychedelics in restoring an appreciation of the sacred and transcendent, which Western culture has all but lost. Universally aboriginal cultures treat psychedelic plants as a sacred source of archaic wisdom, and a tool for gaining insight, and healing, and the Shaman is a rightly revered cultural figure. Could we learn something from these other, more sustainable ancient cultures? Certainly, we desperately need to open our eyes to pressing existential issues such as the unsustainability and destructiveness of our way of life, our commodification of animals, and our ruthless exploitation of the planet. In Jungian terms, as Pinchbeck points out, we ignore our shadow at our peril! If psychedelics raise our awareness to the sacredness of the world around us, the transcendent nature of our consciousness, and the destructive way we treat both, we should take their proposed use as a means of gaining insight seriously.

In this I found myself in full agreement. I only started to feel uncomfortable as the book went on. Psychedelics have been shown to make people more open minded, but it is possible to become (in the words of Richard Dawkins) "So open minded, your brains fall out".

Prophetic visions, channelling, synchronicity, alien visitations, crop circles, disembodied entities and the return of Mayan gods are just a bit too wooey for me, and while Pinchbeck treats the many rather fantastical theories that abound only as "hypotheses", the line between subjective and objective reality in the book at times becomes distinctly blurred.

For example, speculation as to the nature of the December 21st 2012 apocalypse occupies much of the second half of the book. Yet, as we now know:

On December 21st 2012.... Nothing happened!
Quetzalcoatl did not return.

While the failure of any significant happening was more Harold Camping than Jim Jones, nonetheless with hindsight, it demonstrates a lack of credibility, which rather undermines the cause. Unless we can remain grounded enough to distinguish between objective reality and the projections of our psyche, we stand to become entangled in ever more elaborate delusion.

So, in summary, this is not a book, but a series of talks. Interesting, controversial, quite a bit wooey, and short -perhaps too short for the price. However, for anyone interested in psychedelic or New Age ideas, it is an excellent review both of the diverse literature as well as many of the somewhat fantastical ideas that are out there.

Loved it. excellent narration from the author. would highly recommend to all those interested in this subject.