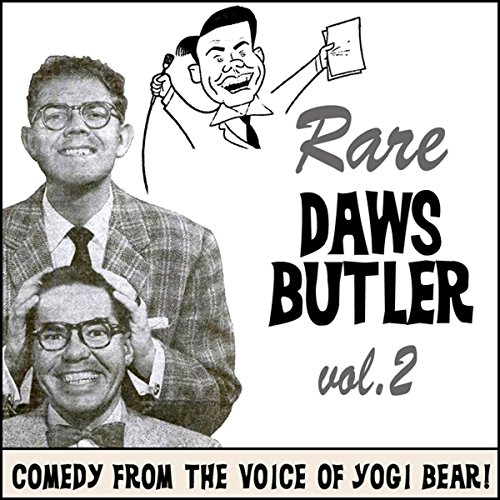 As heard on Sirius XM Radio and NPR stations, here is volume two of Rare Daws Butler. Daws Butler was the voice magician behind such classic cartoon characters as Yogi Bear, Huckleberry Hound, and Quick Draw McGraw. Daws also co-wrote and voiced many of Stan Freberg's greatest comedy records, including Saint George and the Dragonet.

Host Joe Bevilacqua presents an hour of rare Daws Butler comedy recordings, featuring the voices of Stan Freberg, June Foray and others, including "The 64 Million Dollar Question", "Bingo Ringo", "This Is Hawthorne", "Mr. Jinks Had a Little Lamb", "Clementine", "Yogi Tells All", "Confidgetyential", and "Peppy Possum".

Joe Bev did another fine job in bringing us rare Daws Butler. Features an interview with Yogi Bear, an pilot for an ABC radio show, and two songs--one called "Bingo Ringo" (given the popularity of the Beatles and Lorne Greene's single at the time, not a surprise) and a rocked up version of Oh My Darling Clementine, in his Huckleberry Hound voice. Daws was the Voice Magician we loved in so many cartoons and comedy bits (his work with Stan
Freberg, for example) and years later he worked with many aspiring voice artists. Fans of Daws, cartoons, Stan Freberg (a couple sketches will remind you of Stan's stuff), old time radio, etc. should enjoy this.