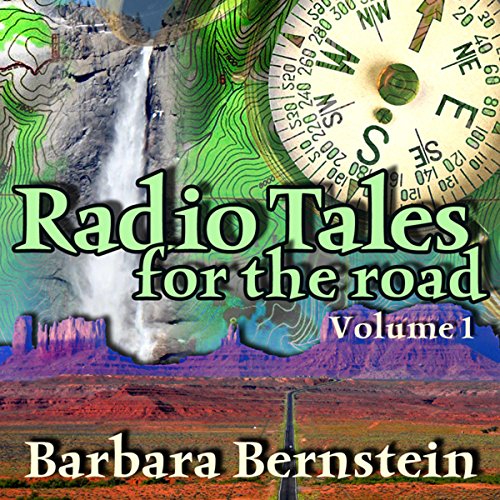 Radio Tales for the Road: Transformational Journeys Through Time, Space and Memory, Volume One

Radio Tales for the Road is an ongoing series of transformational journeys through time, space and memory, written, produced, and narrated by Barbara Bernstein.

Combining story-telling, documentary audio, radio drama, and original music, Radio Tales are vivid recollections of the Summer of Love, the Days of Rage, discovering the wilderness, and the dysfunctional families that propelled so many of us to create our own realities. These wild and edgy tales dispel the notion that if you remember the sixties you weren't really there.

In "Getting Lost", Bernstein contrasts personal experiences of being lost in the wilderness, as a young hippie gets lost in Big Sur on her first trip out west and then 30 years later as a seasoned hiker, when she gets lost in a canyon in Southern Utah and meets the many faces of Coyote the Trickster.

In "Hidden Waters", Bernstein explores life and death on underground rivers and underwater waterfalls, the ghosts of once abundant salmon fisheries that were formally waterfalls and rapids, now innundated behind the dams on the Columbia River, and then a culverted river in the producer's hometown on the day of her father's funeral.

Radio Tales for the Road was broadcast on Oregon Public Broadcasting, KBOO-FM, and other stations in 2000 and 2003.

Barbara Bernstein has been producing radio documentaries for over 20 years and has received numerous awards, including quite a few NFCB Golden and Silver Reels and two NLGJA Radio awards. Her most recent productions are two one-hour documentaries" Sculpted by Fire and Urban Green. Bernstein is also a guitarist, vocalist, violist, and composer. She plays European Cabaret and tangos with a band called Padam Padam.