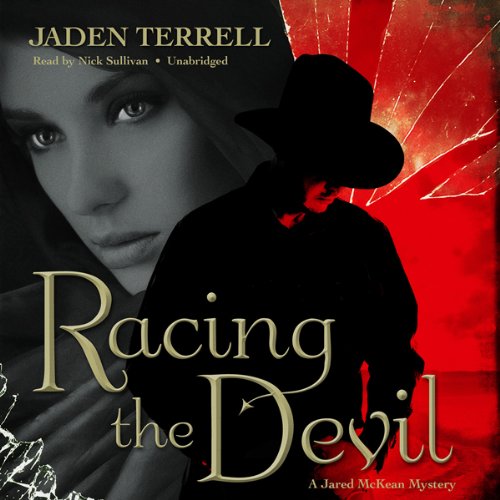 Nashville private investigator Jared McKean has a son with Down syndrome, a best friend with AIDS, an ex-wife he can’t seem to fall out of love with, and a weakness for women in jeopardy - until one frames him for murder.

His DNA and fingerprints are found at the murder scene, his voice is on the victim’s answering machine, and the victim was killed with a bullet from his gun. To make matters worse, his teenage nephew comes out of the closet and runs away to join a dangerous fringe of the goth subculture. Now Jared must find a way to clear his name, hold his family together, and solve a case that could cost him his life.

Jaden Terrell is a member of Mystery Writers of America, Private Eye Writers of America, International Thriller Writers, and the Tennessee Writers Alliance. The former special-education teacher is the executive director of the Killer Nashville crime literature conference and a SEMWA Magnolia Award winner. A graduate of the Citizen Police Academy and the FBI/TBI Citizen Academy, Terrell has a red belt in Tae Kwon Do and is certified in equine sports massage therapy.

©2012 Jaden Terrell (P)2012 Blackstone Audio, Inc.
“This is a first-rate PI novel that opens with one of the best-constructed frame-ups I’ve ever read.…Written in spare, note-perfect prose, with a knockout plot and characters who don’t go away when you close the cover, this is a terrific book. I hope there’s going to be a lot more of Jared McKean.” (Timothy Hallinan, Edgar Award nominee)
“The stuff Hollywood movies are made of: suspense, intrigue, hi-fi action - all the ingredients of a staple thriller are there in the correct proportions in Racing the Devil.…Terrell delivers a punching thriller that’s pure Hitchcockian in suspense.” ( New Mystery Review)

Keep One Step Ahead

Would you consider the audio edition of Racing the Devil to be better than the print version?

Yes, I think that the audio edition of Racing the Devil would be better than the print. I did not read the printed version but the audio was very good. I enjoyed listening to the narration by Nick Sullivan. He did an excellent job.

I love horses and so does the protagonist, Jared McKean. He went to see a gelding, not because he wanted to purchase the advertised horse but for an ulterior motive. He had to see the horse to keep up his charade but the tenderness Jared used to check the horse out was touching. The horse responded a little warily at first but Jared was able to gain his trust in a short period of time.

Yes. Jared went to Calvin's home and what he saw there was heart stopping. I won't spoil the scene because it is relevant to the story.

There was good character development. The story had several well orchestrated scenes that kept me wanting to hear more. There is one more book in the series but I'm hoping that it will continue and the writer will add more books. I will purchase the book because Racing the Devil left me wanting to know more about the characters. The same narrator reads the next book and he was an excellent narrator as I mentioned above. There was mystery, drama, kindness, anger and many more emotions distributed throughout the novel which helped to make it a good read, also. The plot followed throughout until the end.