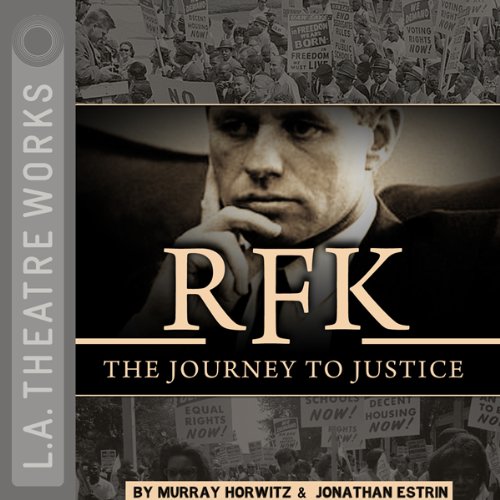 A behind-the-scenes story of a high-stakes political drama that dared the country and its citizens to look into the mirror - and change. Robert Kennedy had an early mistrust of Dr. Martin Luther King and his tactics, but became one of the civil rights movement’s greatest champions. Through Kennedy’s transformative experience, the victories and defeats of an era are retold for a new generation.

The subject is easy, not very original and a bit hagiographic. And it presents itself without a great effort of creativity, facts are there, dialogues are already written and documented, characters are evident and already popular and portraited.
However, well written, with a good work in recalling and choosing eminent facts and significant moments, and also developed in a lively way, somewhere funny (to choose Hoover as caricatural exhilarating figure is lovely...), somewhere touching (music helps, and history itself too, as well...).
And very well played (it's an audiodrama, not a simple audiobook). A very high level, for a production that comes from an university job.
Good listening, happy choise. I've appreciated... 😍

I was a child as many if these events unfolded. I remember the angst and travail of simply existing in a world where I was not wanted. I remember the discomfort of seeing my articulate, educated, law abiding, socially engaged parents looked at as less than. I can recall the pain of not knowing if I would ever be valued outside my own home. This story; the way it is told and the evolution of the relationship between RFK and MLK; gives me hope for today and (in somes ways) helps to sooth the wounds of yesterday. I grew to adulthood wondering what the world would have been if the two men had survived. This book recreates a sense of urgency and hope. I would recommend it to everyone who is seeking to understand the undercurrents of the times in which we live.