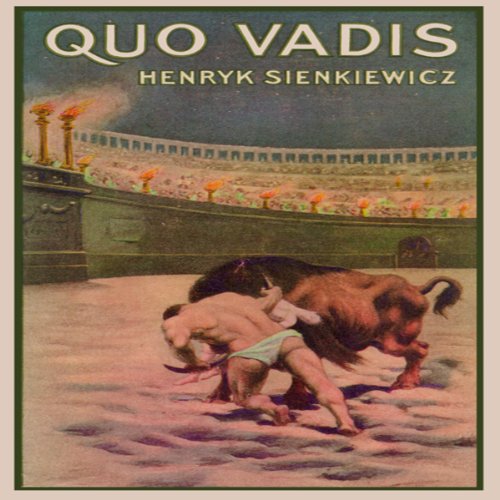 Written over a century ago and translated into over 50 languages, this masterpiece of historical fiction is one of the best-selling novels in history and the inspiration for the MGM motion picture of 1951. An epic of love and courage in Nero's time, it illustrates the conflict of moral ideas within the Roman Empire at the dawn of Christianity.

Marcus, a Roman officer in Nero's army, risks his career, his family, and even his life when he falls in love with a Christian woman named Callina. In order to win Callina's love, Marcus must come to understand the true meaning of her religion, even as Rome sinks under the excesses of Nero and Christians are thrown to the lions. Quo Vadis brims with passion and life as it explores one of the turning points in history.

I don't understand some of the other reviews ! Not only is Frederick Davidson THE best narrator on Audible he also does a perfect job in reading this book. There can be hardly anything said about the story for it is known to most of us, and may it even be from the picture made in in the 60ies, starring the unforgetable Sir Peter Ustinov. The criticism about the "ancient ttranslation" is not very well founded. Sure, there are a lot of "thou" and "thee" but this makes the story more interesting and does not affect the fluency of the book. I read this book many years ago and this "audio delicasy" brought back old memories. All in all it was extremely enjoyable listening to this great tale.

First, Sienkiewicz is one of my favorite authors, and it is a shame that Audible doesn’t offer more of his works. Quo Vadis would only rank in the middle of the pack, with many better books out there. Please record more!

Some reviews complain about the translation, there is not a mistake here; Sienkiewicz is writing a book about things that happened about 30 years after the death of Christ, so he tried to make the language sound contemporary to the bible. It makes sense in the story. Admittedly Frederick Davidson’s narration may make this a little worse to people who are sensitive to something that sounds "old", as he does have a very formal British accent. Personally Davidson is one of my favorite narrators on Audible, and I feel he does great work with this Nobel Prize winning novel. While on one hand this is a novel about Christians in Rome (one of the better books in this genera), it may also be interesting that the author wrote this in a partitioned Poland. Not all the jabs are just about the historic decadence of Rome.

If you liked Ben Hur and The Robe and have the patience to read something above the eighth grade level (that is to say, something with high level language, extensive explication of historical setting and surroundings, and slow but sure character development), you will like Quo Vadis. It will remind you a lot of The Robe in its theme and development, but it is a fine classic in its own right.

You will smell Rome burning!

1. The historical detail is integral to the story, and provides not only the setting but sets up the story's twists and turns.

2. The Christians are portrayed realistically -- neither as morons nor as unbelievable saints. Even the real "saints" (Peter and Paul) are depicted as flesh and blood humans trying to make sense of their beliefs in light of Nero's persecution.

3. The familiar historical events depicted in the story, particularly the burning of Rome in 64 AD and the subsequent persecution of Christians, are made vivid in ways that your history class never did.

The most striking feature of the novel is the portrayal of Christianity as a new and unique sect in the midst of polytheistic and skeptical Rome. In our day, Christianity is rarely distinct from the rest of culture, except for a couple of unique social convictions and some individual beliefs. Sienkiewizc portrays the still nascent Christianity in its most simple yet most compelling form, bereft of the past two millennia of doctrinal, political and moral disputes and scandals.

Struggled to get used to the narrator at first, but after some time, greatly appreciated his breadth of characters. Fantastic story! Wonderfully woven with history.

The speech patterns of the narrator makes it difficult to listen to this otherwise good novel. The narrator has a bad habit of "upspeak" (breaking sentences into fragments each ending with an high-rising terminal, also called "valley girl speech." Eventually one is focused on the annoying anticipated terminal instead of what is being said. Additionally, the narrator may begin with a slightly different intonation or "voice" for a different character, but then he gradually fades back to a baseline character voice. Ultimately listening to 22 hours of valley girl would probably detract from any novel.

Would you consider the audio edition of Quo Vadis to be better than the print version?

No, the book has so many references to historic figures, that the print version offers the opportunity to stop and review--it makes following the story easier.

Would you listen to another book narrated by Frederick Davidson?

Yes, however i felt his performance was stilted and lacked nuance. For example, Lygia was always breathless and Peter sounded like Dracula. This was the first time I listened to a recording of his and I felt it was the weakest part of the experience.

I am fond of Frederick Davidson as a narrator but I suggest you listen to a sample because he has a unique voice and style. He’s a narrator one loves, as I do, or dislikes. I enjoyed the story. I have had curiosity about the early Christians in Roman and Paul’s letters to the Romans is one of my favorite Bible books.

I sometimes found it difficult to focus on the content because of the poor sound quality. The pitch and volume of the voice would go up or down haphazardly, which was quite annoying.

An epic story lumbered by an insufferable narrator

Quo Vadis is a splendid story of epic scope, ambition and achievement, surely the tipping point and crowning glory in Henryk Sienkiewicz’ Nobel Prize for Literature… but Audible’s offering is fatally lumbered by the insufferable narrator! Frederick Davidson’s delivery is so camp and inappropriate it becomes offensive and disrespectful. Like other very perceptive listeners have commented, “his performance was stilted and lacked nuance. For example, Lygia was always breathless and Peter sounded like Dracula” “…the narrator speaks with an uber-upper class British accent that, combined with the archaic language, turns the characters into snobs and drama queens.” I couldn’t agree more. Davidson’s delivery has aged very ungracefully – it probably sounded OK forty, fifty years ago, but to us today it is too pompous, forced and arrogant. This is a crime because Quo Vadis is one of the greatest epic novels ever written– please, Audible or someone, bury this version forever and get a modern actor with more brains, better range, sensitivity and respect to record this magnificent text!

The author took a tone of books about history and re-wrote them in this book. Add a bit of spices with religion and a love story - and done...

There were moments that I dozed off trying to skip all the overly-explained details.. which if you don't know exactly what they mean, you'll never figure out what is written.

Everything develops slow and in a very non-exciting way...

allow yourself to get into it...

Where does Quo Vadis rank among all the audiobooks you’ve listened to so far?

at the top third,, I am sure I will listen to it again some time

What does Frederick Davidson bring to the story that you wouldn’t experience if you had only read the book?

His performance has been criticised. In my opinion his performance suits the main character Petronus very well. It may take some time to get used to his style, but actually after a while I became very appreciative of the performance

If I say it would spoil the stotry, right?