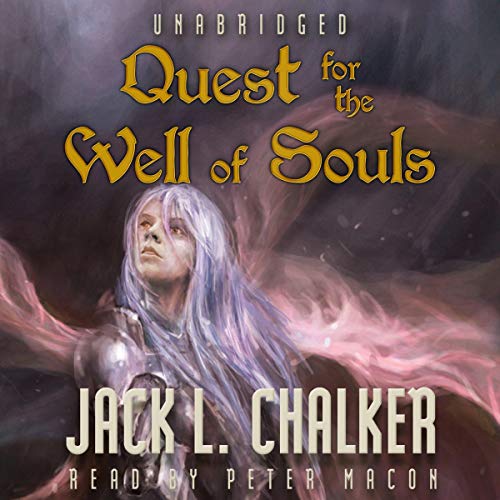 Quest for the Well of Souls

Mavra Chang was once a master criminal, notorious throughout the galaxy. But for 11 long years she has been trapped in a nonhuman body on the Well World - the master control planet for the universe, where untold numbers of strange races exist, separated by barriers erected by the mysterious, vanished race that built the Well World billions of years ago.

Orbiting the planet is a planetoid concealing Obie, a supercomputer that could restore Mavra Chang to her original form - if she can reach it. Unfortunately, the only spaceship on the planet is hidden in the northern hemisphere, a place no living creature can survive. She soon learns that her enemies are plotting to eliminate her, steal the ship, and escape from the Well World…. But many others have planned her demise before, and Mavra Chang is still alive and well - which is more than can be said of those who once wished her ill.

Great story with a lot of caveats...

Ok, I’ve purchased all three of the series available on Audible, which should tell you that the story, at least, captured me. And it was interesting & enthralling, most of the time.

I’ve seen a couple of other reviewers mention that it seems dated, and maybe so, in terms of language. Today, terms like “ robot guards” seem quaint. Now it would be “drone sentinels “ or something.
SPOILERS AHEAD.

The fundamental problem I had was the lack of depth in conveying his emotional intent regarding several characters. In this particular book, part 3, the things done to Mavre (& almost all of the women throughout the book) were absolutely monstrous, with Marvre being the worst. But her supposed allies were complicit in a lot of that, too, with only a rudimentary sense of guilt associated with their actions & no consequences for their complicity! At least book one had some sort of judgment finale. In this one, even her own grandparents got over their own guilt when they discovered they’d collect a bounty meant for Marvre!
Plus, Marvre’s own reactions to the things done to her & the condition in which she was forced to remain didn’t gel with her strong personality & code.

And Ortega. He especially deserved a “come to Jesus” reckoning, but again- crickets.

All of that said, I don’t regret my purchases. I enjoyed the story a good deal. It just bugs me when important story elements don’t align as they could, or should, and so it seems a bit less satisfying.

Peter Macon has a strong, rich voice, and overall, I’d welcome listening to him again, although he sometimes blended character voices throughout the series. A good editor should have caught that early.

I am Mavra Chang, Bride of the Stars

What did you love best about Quest for the Well of Souls?

The best part is the zany world that Chalker has created. It's sci-fi, fantasy and a mind boggling display of creates and world building. Amazing.

What other book might you compare Quest for the Well of Souls to and why?

I can only compare this to other Chalker books. He is a very unique author. I can only remotely compare him to John Varley in terms of his imagination and scope of the worlds he creates. Some readers might not like him though. He sometimes provides alot of detail on items that never come into play. That doesn't both me. To immerse yourself in Chalker is to take a leap into the unknown. Its escapist entertainment at its best.

He really grew on me. In the first Well World book I thought he was so droll I would fall asleep. Then I realized he was playing many characters and that droll delivery was the narrator, so it was at some level comforting. I think he did a fantastic job and would not trade his performance with anyone.

Interesting. This book was one where i did. I drove a long distance and listened to to at once. It was fun.

There is something about Chalker that harkens back to a time in Sci Fi that was not dependent on snappy plots or fighting/action. He builds complex worlds that are intent on opening your imagination up to new ideas...some of which are philosophical and some are decidedly not. I wish Audible would make the entire Well World Series available, if you read this review let them know! I have....

I enjoyed the book. It was a great twist on classic sci-fi and the plot was engaging and had some good twists. I just wish there were more of the books available on audiobook!

great story, some parts I wished were gone into more orther I felt went to much. All in all a great story.

I liked this one a lot more then Exiles of the well of Souls because the story expanded more on the potentials of the Well World and not on the areas outside. More races introduced, their beliefs, and the return or Wujin and Vaartia was a nice Easter egg. 7/10 purely because it ended good and the subtle hints to Midnight at The Well of Souls was great.

awesome trilogy really was hoping for more closure now I wanna know what obi and mavra are doing.....

I read these books in 1980 and loved them. I still love them 41 years later. They held up very well over time.

QUEST FOR THE WELL OF SOULS was incredible!

But what we need is one volume that contains both EXILES and QUEST.

Yes, EXILES is a “self-contained” novel.
However, it has too much of a cliffhanger ending, which is not as satisfying without QUEST.

Release the Chalker Cut, so to speak!!!


When Everything Goes Wrong ...

Reread after many years.

This completes the story begun in Exiles of the Well of Souls. what starts as a reasonably straightforward adventure turns into a comedy of errors, but one where the slapstick just isn't funny. everything that can go wrong, does, at the worst possible moment. Couple of interesting plot twists, and a pretty expected ending.