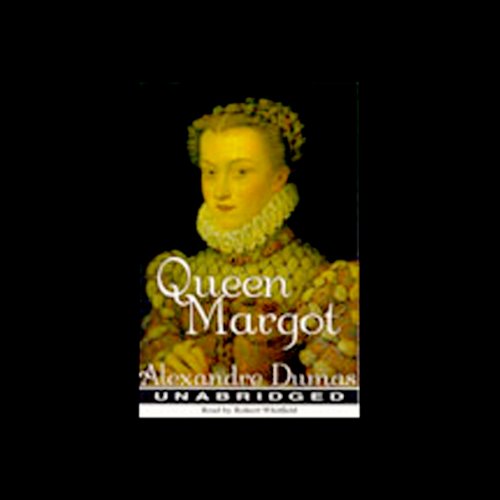 The last years of King Charles IX's reign in France were dominated by religious wars between Catholics and Protestants. Queen Margot begins in 1572 with the marriage of Marguerite de Valois to Henri de Navarre. Marguerite is King Charles' sister and the daughter of Henri II and Catherine de Medici, all firm Catholics. Henri de Navarre is a Protestant who later will become the beloved King Henri IV.
Several important political events have led up to this marriage including the mysterious murder of Henri de Navarre's mother, cleverly plotted by Catherine de Medici. The wedding brings noblemen from all over the world to Paris resulting in the notorious Saint Bartholomew Massacre, where thousands of Protestants are killed.
In this inventive and compelling novel, Dumas brings an extraordinary period of history vividly to life with much excitement and romance. The lively prose and wonderfully constructed plot tell of court intrigues and forbidden love, of beautiful queens, duchesses, and noblemen, suspense, conspiracies, betrayals, assassinations, superstitions, poisonings, and sumptuous feasts.
With well-known historical figures as main characters in a dangerous and breathtaking game for power, Queen Margot tells of conspiracies, clandestine trysts, and daring escapes. There is the infamous Catherine de Medici, deliciously evil, constantly plotting and poisoning; Le Mole, a dashing and irresistable young Protestant who becomes Marguerite's lover; the noble Coconnos who provides a great source of comic relief; and at the center of all this intrigue are the good-hearted Marguerite and Henri who are perfect political allies with complicated and fascinating love lives.
(P)1998 by Blackstone Audiobooks

I first checked this audiobook out from my library, but I liked it so much I decided to buy it here. That was a mistake. While the story and narration were still excellent, the sound quality of this Audible version was terrible. It sounded like they had taken the original recording to a tunnel and made a cassette tape copy of it there. Oddly enough, the chapters didn't match up either. For example, clicking on chapter four not only takes you to the middle of a chapter, but the middle of a sentence. I was extremely disappointed and will be returning this audiobook.

A fascinating history -- and Dumas as well

Le bon roi Henri is the most beloved king in France's history. Catherine de Medici is one of the most despised (rightly or wrongly) figures of the Renaissance, the archetype schemer and poisoner. La reine Margot became one of the fairy tale princesses of French history. All because of this book. It's a great story, a true story, mostly, and Dumas is the greatest storyteller in history. Unfortunately, the gallant style is not Robert Whitfield's (Simon Vance's) forte, but he still does a passable job. It's worth the money/credit. I would bet that you listen to this more than once in your life.

I selected this book because it was "on sale," thinking it would be low risk if I didn't like it. I loved it! The story is engrossing, the narrator excellent. My only gripe is with the sound quality -- there seems to be a lot of background noise/feedback.

I absolutely loved this book. Fast paced swashbuckling adventure, brotherly love and Bromance, Romantic intrigue with beautiful women, and the murderous machinations of Catherine de Medicis! Lust and vengeance at every turn!
What's not to like?
The two Heros are very much in the style of the later humorous and wonderful Musketeers of the 'D'Artagnan' series by Dumas. Those readers, like me, who've craved for similar stories of honour and adventure and the goodness of men against evil, will thoroughly enjoy this book and it's brilliant narrator, Robert Whitfield.

The recording is low quality, but both the story and the narrator were wonderful. I recommend it.

Not a great rendering of a public domain classic

More so than with Dumas's other works (Three Musketeers, Count of Monte Christo), you really need to know your French history for this one, or have Wikipedia at the ready to keep track of all the kings and princes and Henris. I definitely struggled. I think I found the plot less interesting than I might have had I had more investment in French royalty going in. Although know that this is a novel, not actual history. Catherine d'Medici may not have been quite so terrible.

A bigger complaint, one that has nothing to do with my own failings as a scholar, is that this particular recording has some major failings. When I buy classics like this, where I know I could get a free version in the public domain, I judge on whether or not the audible version is superior to what is available in the public domain. This is not. The "chapters" in the audiobook in no way correspond to the chapters in the book. In some cases an audio chapter ends only a paragraph into the book chapter. It seems like such a simple thing--why not trim a few seconds off of one track and add to another to make things match up a bit more? Also, I have no idea who the translator is, which is annoying. It seems to be close to, but not exactly, the translation available in the public domain, The narration is competent but not markedly amazing. My advice: Find this one in the public domain and save your credits/money for something that will support living artists who could use your patronage.

It gets better towards the last portion

The story takes fictional license with the history of King Charles IX of France, and Henry of Navarre who becomes Henry IV of France. Though in itself, this is an interesting - and violent - history, as it includes religious wars in France and the St. Bartholemew’s Day massacre, the string of plots, counter-plots, constant intrigue and subterfuge can get tedious. The romances are not of real interest, are fictional, and yet much of the story is devoted to them, and revolves around them. That the royal family is quite dysfunctional comes across quite well, as does the fact that Catherine de Medici was ruthless.
The narration is good, but the quality of the recording is not. It needed an editor - there are repeated lines, and even a sentence that the narrator corrected himself, and of course, that should have been edited out. It’s a shame that Audible does not offer the Simon Vance narration from Blackstone Audio - I’m sure it would be a better version.

The last French Kings of Valois and their Mum.

Catherine de Medici, mother of Charles of France must vie with Livia, the wife of the Emporer Augustus of Rome (as described in 'I Claudius' by Robert Graves) as the nastiest, most evil woman in European history.

I was reminded too of Eco's 'Name of the Rose' in the attempt to poison Henry that ended with Catherine's murder of her son. I think I could find many other gems of plot that have been developed by later authors in the construction of other authors' subsequent novels.

With great humour Dumas presents us a Grand Melodrama.Though I do not know this, it was possibly published in serial form in the newspapers of his day.

This story written in 1845 is set in the late 1500's. Religious massacres and gross betrayal, contrived by Catherine, follows the diplomatic marriage of her daughter, Margot to the Huguenot King Henry of Navarre. Having lulled the Huguenots to drop their guard the Saint Bartholomew Massacre of the Huguenots begins.

Read so very well by 'Robert Whitfield', I found this Audio far more enjoyable than my reading of the hardcopy and the movie made in the 1990's.

Beautifully read, but not up to Dumas standard

Somehow, I keep getting bogged down. The story drags, although this IS Dumas, and the reader is excellent. The prose is elaborately wordy, which might read better on paper than as a listen. But if one gets bored in listening to the description of a major battle and desperate rescue, there is a problem...

This wasn't the best book for me. It's written in "old fashioned" style, so while I find the subject fascinating, I couldn't get past the verbose prose. Someone who likes reading period books in period style would like this book.