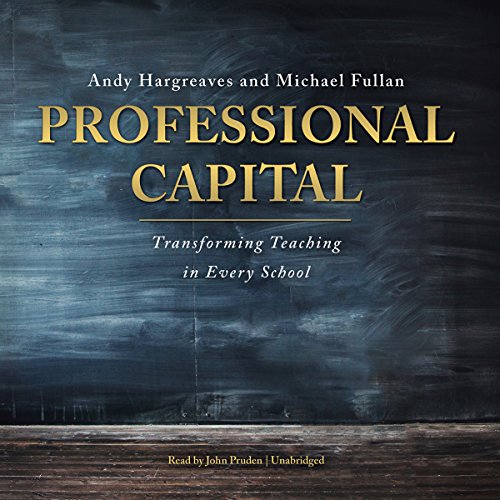 The future of learning depends absolutely on the future of teaching. In their latest and most important collaboration, renowned educators Andy Hargreaves and Michael Fullan speak out against policies that result in a teaching force that is inexperienced, inexpensive, and exhausted in short order. These two international authorities - who know teaching and leadership inside out - set out a groundbreaking new agenda to transform the future of teaching and public education.

Idea driven, evidence based, and strategically powerful, Professional Capital combats the tired arguments and stereotypes of teachers and teaching and shows us how to change them by demanding more of the profession and the systems that support it. The audiobook includes action guidelines for classroom teachers, administrators, schools and districts, and state and federal leaders. No one connected with schools can afford to ignore this insightful book.

Michael Fullan is professor emeritus of the Ontario Institute for Studies in Education at the University of Toronto. An innovative thinker who is sought after by institutions, publishers, and international think tanks, he is also special advisor on education to Dalton McGuinty, the premier of Ontario. He holds honorary doctorates from the University of Edinburgh and from Nipissing University in Canada. He has written several best sellers on leadership and change, four of which have won book of the year awards.

©2012 Teachers College, Columbia University (P)2012 Blackstone Audio, Inc.
"This important book makes it clear that teaching stands at a crossroads between policy decisions that will help create a great profession for all teachers or ones that will make teaching robotic and unexciting - hurting student learning for years to come. Hargreaves and Fullan urge us not to stand aside or to wait. It is time, they say, for the teaching profession to be led by, for, and with teachers and for others to join in concerted action to support that transformation." (Dennis Van Roekel, president, National Education Association)
"Transforming education is one of the signature challenges of our times. Professional Capital sets out exactly and undeniably why the only way to do it is to honor and improve the profession of teaching. Written by two of the sharpest educational thinkers in the world, Professional Capital is an incisive critique of the failing reform movements in many countries and a powerful manifesto for the only strategy that can and does work. This book should revolutionize how policymakers and practitioners alike think and act in education. The price of failure is more than they or our children can afford." (Sir Ken Robinson, world-renowned author and educator)
"Brimming with insights and action ideas, Hargreaves and Fullan lay out a clear and cogent plan to transform American public education, community by community. Professional Capital is a finely written and urgent argument for real change in how we do our business." (Dan Domenech, executive director, American Association of School Administrators)

In order to write a review about “Professional Capital: Transforming Teaching in Every School”, I have tried to go through the main concepts of the book following a logical structure.

Everything starts from the basic idea of the capital. Capital relates to one's own or a group's worth. In educational terms the wonder here would be: How do we invest in people and get returns for those investments? There are two ways of answering this question:
•Business Capital: “Hunt for talented individuals, work them hard and move them when they get restless or become spent”.
•Professional Capital: Invest in professional work, capacity and effectiveness in order to improve teacher's and teaching quality.

The authors consider professional capital as key principle in order to improve the educational system nowadays. This way they reject the view of schools as a big new markets where investing for curriculum, technology and testing materials define the system. In contrast, they foster a professional capital which integrates and develops individual talent, teamwork and the ability to take discretionary decisions. In another words, human, social and decisional capitals.

Therefore in order to get a real and long-term change in education, professional capital is defined as the basis in this scheme. When applying this kind of capital in reality, it may have several consequences in the teaching and learning processes. Actually, bearing in mind the main foundations of this approach it appears to be necessary to come up with a new teaching way: Teach like a pro. Teach like a pro involves several actions “is a personal commitment to rigorous training, continuous learning, collegial feedback, respect for evidence, responsiveness to parents, striving for excellence, and going far beyond the requirements of any written contract”.


- Where should we focus our attention?

In this point, we know where we are going. In fact, the key principle or basis is defined and the teaching method is determined as well. However, where do we need to invest our money/time/energy in order to teach like pro? Where do we need to focus our attention?
•Capability: To have the required attributes for performance and accomplishment.
•Commitment: Good leadership and colleagues help sustain commitment.
•Career
•Culture: Culture is about what does together and what should be kept apart. Traditional, unquestioned and arbitrary nature.

These ingredients need to be taken into account to cultivate high quality teachers and create an appropriate atmosphere in order to perform like a pro. Teachers, school leaders, governments… should be responsible of developing these features, without forgetting each teacher's task starts with their selves.

ENACT THE CHANGE
1.Define the key principle and teaching method
2.Specify the main features to be taken into account in order to foster the change

3. The change will be enabled when specifying actions and guidelines in different levels and applying them in reality

Where does Professional Capital rank among all the audiobooks you’ve listened to so far?

This is my first audiobook and listening to this book is a good first experience and I think I rather have this, rather than a book to read.

I love the story since it gives the power to enrich the Teaching profession.

Which character – as performed by John Pruden – was your favorite?

No, it talks a lot of different sittings.

I am very please to read this audiobook. All I want is to share it with other teachers as well. Thank you!

A must read for everyone in education

Hargreaves and Fullan hit the nail on the head. Educators are under so much pressure to fix our failing systems. This book gives practical means of making education the answer to society's problems.

What did you love best about Professional Capital?

I work with teacher and leader observation and rating systems. This book is presented clearly with the current educational leader in mind. A well-matched narrator allows meaning and relevance for a systemic success perspective.

This is a practical guide to understanding common misconceptions about currently considered 'best practices'. This book has a logical sequence with meaningful (and sometimes repeated) examples of practice. A building or district level leader should be able to formulate and implement a plan for instructional implementation success following this information.

My reaction to this book is that I want to listen again and again - especially to the last two chapters - they are powerful for improving practice.

Would you consider the audio edition of Professional Capital to be better than the print version?

The writer Andy Hargreaves and Michael Fullan organized their thoughts staring from a core theme: the teaching profession, as well as a core question: how can the teaching profession become beneficial to individuals and society? In order to fully interprete this theme and find an answer to this question, they figure out four main parts across the whole book: problems in teaching and reinterpretation of teaching; teaching like a pro; the professionalism of teaching and variable professional capitals of teachers; the “what”,“why” and “how” dimensions of the professional capital. The four parts are highly correlated with each other, and offers a social perspective towards the understanding of teachers and the teaching profession.
The writing style of this book is that this book is often good at critical thinking, which means that it often points out a dilemma in real situation rather than a true or false fact; besides, the book is often evidence-based, which means that it gives many research examples to illustrate the main points; further, the words here are lively language which is easy to remember and understand. More important, the theoretical aspect of this book is very strong, for example, “Teachers as action researchers or inquirers use external and internally collected evidence to inquire into their practices, assess their effectiveness, identify the reasons for difficulties and also successes, and plan how to improve and make interventions as result(Hargreaves & Fullan, 2012)”, this quote makes me think that the meaning of “research”. “Research” can be done by teachers themselves rather than outside experts. Teachers can figure out the research problems based on their experience and practice, and through learning from theory and practice, they can find solutions.
When I read the book, I often reflect on myself, such as my prior knowledge and experience. For example, I major in teacher education and get some theoretical knowledge of teacher education. I find there exists two approaches toward teaching and teachers, which is the technical approach and the humanistic-social perspective. The contribution of this book is that it provides us the social perspective towards teaching and teachers, and points out the solution is in social context rather than some technique thing. I once did some qualitative research in my own country, and through the interviewing process, I know that social relationships such as collegiality can have a significant influence on teachers’ profession, and the school context and culture also makes effect. For example, in China, the teachers often have limited autonomy and it makes teachers feel like followers rather than leaders, and reduces the degree of professionalization.
The book interprets research phenomena from a social-cultural perspective. This perspective makes readers wonder: what does “professional capital” mean? What role does “professional capital” play in “transforming teaching”? What is the relationship between “professional capital”, “teachers” and “teaching”? These questions are may not easy to answer, yet this book contributes its own thinking to this question, by conceptualizing a very important concept “professional capital”.
I would quote the concept as the conclusion:
Professional capital concept is a cornerstone concept…… It is about what you know and can do individually, with whom you know it and do it collectively, and how long you have known it and done it and deliberately gotten better at doing it over time. (Hargreaves & Fullan, 2012)

Narrated by a computer, pretty monotonous to listen to. Not sure about the content yet, which could be good. Not sure I'll be finishing any time soon though

Heartening to know people are still in the Education system for the right reasons! Insightful, challenging and practical.

All teachers and school leaders should read this.

Really inspired by this, lots to think about. I want to buy copies to put in the staff room. Essential reading.