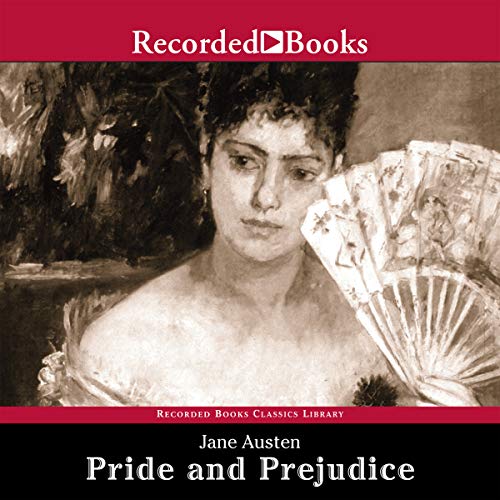 Many consider this rich social commentary to be Jane Austen's finest novel. It is certainly among her more famous ones. Austen sets her entertaining study of manners and misconceptions against the backdrop of a class-conscious society in 18th century England.

Spirited, intelligent Elizabeth Bennett is alternately enchanted and affronted by Mr. Darcy. She is quick to suspend her usual, more rational judgment when it comes to him. She also is quick to believe the worst gossip about this haughty, opinionated man who soon manages to alienate Elizabeth and her family. But is the condescending air that Mr. Darcy wears an indication of his real character? Or has Elizabeth's pride gotten in the way of her chance for true romance?

Practically perfect in every way

This has always been one of my favorite audiobooks. It was one of the first unabridged audiobooks I ever listened to, on a set of cassette tapes checked out from the local library. After listening to it again, I'm struck by the unique collaboration between Jane Austen and Flo Gibson: both are here at the absolute top of their game.

Austen is sometimes characterized as superficial, more interested in the economics of marriage than in the "higher feelings." But the economics were important, and in any case it would be hard to think of another character more defined by genuine, deep feeling than Elizabeth Bennet.

There is darkness here. It's not just in large things, like the frankly described disgrace that follows Lydia's impulsive attachment to Wickham. (Austen would never use the word "sex," at least not in reference to sex; but she leaves no doubt about what Lydia and Wickham are up to, or what it means for the family in the conservative, judgmental world of the novel.) There are small tragedies scattered throughout the novel. Charlotte's marriage to the odious Mr Collins is one: she has to endure constant embarrassment at the hands of her ridiculous husband; but worse, a wall drops down between her and Lizzie, a wall that does, in fact, put a permanent end to their former intimacy.

The ending may be a fairy tale for Jane and Lizzie, but others are not so lucky. Mary remains at home with her parents, forced to leave aside her own pursuits, pathetic as they are, to listen to her mother's endless babbling. And Lydia and Wickham never learn: they wander from house to house and town to town, always looking for a situation they can afford, always leaving behind debts and diminished reputations.

Gibson's voice is a bit raspy, not at all the kind of lilting sound you'd expect from the prose itself. And yet one after another, she captures the essence of each of Austen's brilliant characters, from the insufferable Collins, to the eccentric and (later) regretful Mr Bennet, to the generous and impertinent glory of Elizabeth Bennet herself. Over and over again, I found myself laughing at loud, both at Austen's wit and Gibson's perfect articulation of it.

I've tried to listen to other readings of the book, but for me none of the others comes close.

I really enjoyed this audio ebook. It was really easy to listen along too. I quite often closed my eyes whilst listening and would picture in my mind the story as it rolled along.
I dont beleive you will go wrong in following Flo Gibson as she is quite good, and the way that she changes tones and pace to suit the characters, really gives this book justice and merit. Well done, and I am certainly going to be looking for more narations by Flo Gibson.

The narration is great, and gives the whole book feeling.

Which character – as performed by Flo Gibson – was your favorite?

Yes , i just didnt want to turn my Kindle off, as i really enjoyed it,, Like a good book, once you start it , you just cant put it down,,

The visit to Premberly was always the best part of the book.

Which character – as performed by Flo Gibson – was your favorite?

Mrs. Bennet, is my favorite character, her nerves is my second favorite.

When Jane realized, Bingley's sisters did not like her or her family.

I first read Pride and Prejudice when I fourteen. Jane Austen was boring and knew nothing about women's right. After I turned 21, I began to appreciate her novels and her fight for women Lizzie, was her mouthpiece for 19th century. Now at the age of 63, Mrs. Bennet became my favorite because she controls the story; despite her crying and fainting spells, her daughters married. Of all the novels written by Jane, Pride and Prejudice and Persuasion are my favorites.

I can't possibly rate this book any lower that a 4-star. However, I was somewhat disappointed in this reading, and would recommend trying one of the other available productions.

This is a wonderful book! I had never read the book before getting the audio version and I had great difficulty catching the meaning of intricately worded passages when I listened to it - a momentary distraction meant I missed one word which caused me to lose the meaning of what someone was saying. I finally gave up and got the book. After I read it and knew what was coming and what people were getting at in their ever so polite speeches the audio book was shear delight!

Would you listen to Pride and Prejudice again? Why?

I really enjoyed the story and character development.

Lizzy or Elizabeth was my favorite character, because she is not easily fooled and admits when she is wrong.

It was a little difficult to tell the difference between the characters voices. I had a hard time identifying who was talking and when.

Thank you for providing this book for me to listen to. I am very grateful.

We all know and love this book, but I write the review because Flo Gibson is a favorite reader of mine.

Listening to Flo Gibson read Pride and Prejudice is always a joy. She does justice to the individual characters and their personalities without being too overbearing, as we know some of the characters can be. I totally recommend listening to this one at least once, It was, and remains, my favorite narration of it to date.

I've loved this version since its cassette tape days. Flo Gibson is the best Jane Austen narrator of all.

This read has entertained me many times but I still come back again and again. L recommend this audio file to anybody who wants to be engrossed in the story.