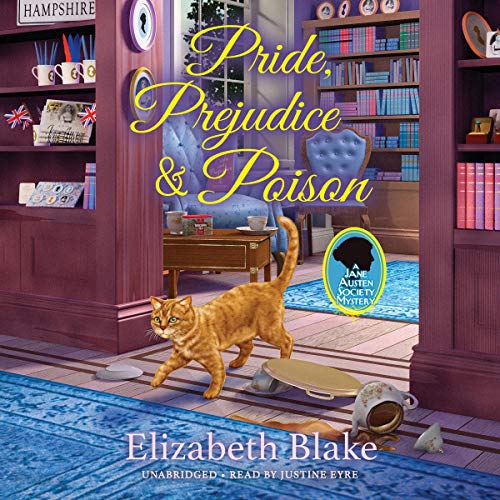 In this Austen-tatious debut, antiquarian bookstore proprietor Erin Coleridge uses her sense and sensibility to deduce who killed the president of the local Jane Austen Society.

Erin Coleridge's used bookstore in Kirkbymoorside, North Yorkshire, England, is a meeting place for the villagers and, in particular, for the local Jane Austen Society. At the Society's monthly meeting, matters come to a head between the old guard and its young turks. After the meeting breaks for tea, persuasion gives way to murder with extreme prejudice when president Sylvia Pemberthy falls dead to the floor. Poisoned? Presumably, but by whom? And was Sylvia the only target?

Handsome but shy Detective Inspector Peter Hemming and charismatic Sergeant Rashid Jarral arrive at the scene. The long suspect list includes Sylvia's lover Kurt Becker and his tightly wound wife Suzanne. Or, perhaps, the killer was Sylviaâ's own cuckolded husband, Jerome. Among the many Society members who may have had her in their sights is dashing Jonathan Alder, who was heard having a royal battle of words with the late president the night before.

Then, when Jonathan Alder narrowly avoids becoming the next victim, Farnsworth (the town's cat lady) persuades a seriously time-crunched Erin to help DI Hemming. But the killer is more devious than anyone imagines.

Please tell me there will be more Jane Austen society mysteries. Really fun book to listen to when taking a walk.

This is an ok book. The characters are engaging and the story is interesting. Erin makes novice mistakes several times. I'll get the next one in the series to see if it gets better.

Fun & entertaining, but not P&P

I enjoyed listening to this book. I originally purchased thinking it would be a modern retelling of Pride & Prejudice based on the title but that is not the case. The P&P characters are mentioned throughout but it is a completely different story. At first I was disappointed, but it began to grow on me. I enjoyed the story & the characters and the mystery. The narrator did a good job too.

a lot of mystery and a little hit of romance. enjoyed this book - will read more.

I ended up enjoying this more then I expected. it was a recommendation based on a book I didn't like. I enjoy reading Jane Austin books, so I gave it a try. I liked it.

Where was the editor??

This is not a terrible story or a real waste of time, but there are some annoying things. The text is so repetitive- characters repeat verbatim dialogue from the previous chapter; phrases are used nonironically to describe different people.
But the main problem I had was the lack of reaction by anyone in the cast of characters to the murder. It happened, it was mentioned, then tea and cakes were served. The victim *SLIGHT SPOILER* was one of their group- their club- and there would not unnaturally be endless gossip and speculation re the occurrence. Here, there was much more talk about the victim Before than after their murder.
Finally, I realize this is a P&P or Jane Austen club, but the number of ready (often lengthy) JA quotations by club members is, well, unlikely. It sounds as if the author googled for them any time a significant word or phrase struck a chord with them.
Not terrible, no, but nothing quite rings true, with cast nor storyline

This was awesomely BAD! Terrible narration too. Couldn't in good faith give the story or performance even 1 star.

I enjoy mysteries that engage without over sensationalizing or sex. That element is for a different genre.
This ticked all the boxes of suspense, empathy, good and strong feminine characters with friendship at the center. Yes. Well done. The only challenge is the narrators substantial increase in volume when giving voice to a character. It required frequent adjustment of the volume on my older device.

Why do American authors writing books with British speakers never get the grammar and vocabulary correct? Gotten? Sidewalk? Teacakes are a light yeast-based sweet bun containing dried fruit, typically served toasted with butter spread over them as opposed to the American teacake which is a small cake. Yorkshire folk don’t like the monarchy? We say tap not faucet. While the narrator is generally speaks British English when she said mobile as in mobile phone it took a while to realise what was meant. Small things but enough to annoy. I will finish listening to the book as long as I can control my tutting.