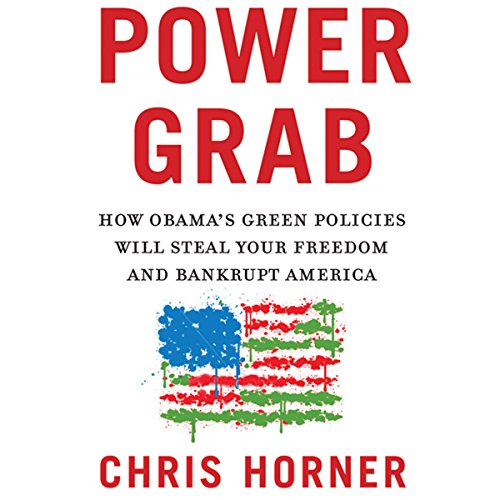 No matter how President Obama spins his proposed government policies, it amounts to the same thing: a power grab.

In his new book, best-selling author Christopher Horner reveals an out-of-control administration that wants to impose mandates, raise taxes, and even subjugate our authority to international organizations such as the United Nations. Horner shows how President Obama wants to take critical decisions about our energy and environment out of your hands and hand them over to politicians, extreme environmental groups, and even foreign governments.

From depressing America’s economy through onerous regulations to stripping you of your freedom through invasive “green” measures, the president and the liberals in Congress don’t just want to run the government, they want to run your life and make you, your children, and grandchildren pay for it.

©2010 Christopher C. Horner (P)2010 Blackstone Audio, Inc.
Conservatorismo e liberalismo Politica pubblica Libertà e sicurezza Politica e governo Economia
Mostra di più Mostra meno
"Horner shows that the green agenda isn’t so much about a clean environment as it is about redistributing income from us to them.” (Stephen Moore, member of the Wall Street Journal editorial board and senior economics writer)
" Power Grab lays bare the plan to replace your individual liberties with the state, securing the Left’s dream of making decisions for you and your family: what you can drive, how you can live, and what sorts of jobs and future they deem acceptable for Americans.” (Mark Levin, nationally syndicated radio host)

What the USSR couldn't do with nukes, we're doing

O is just the latest cog in the communist agenda to rule the world. What he USSR couldn't do militarily, we're doing to ourselves by giving our sovereignty over to the UN. One case in particular is the way we're allowing the IPCC to dictate our carbon usage with their scam of carbon dioxide causing global warming, er climate change. Now that this issue has become political it doesn't matter that the "science", led by Al Gore and the "hockey stick", has been proven to be a hoax.