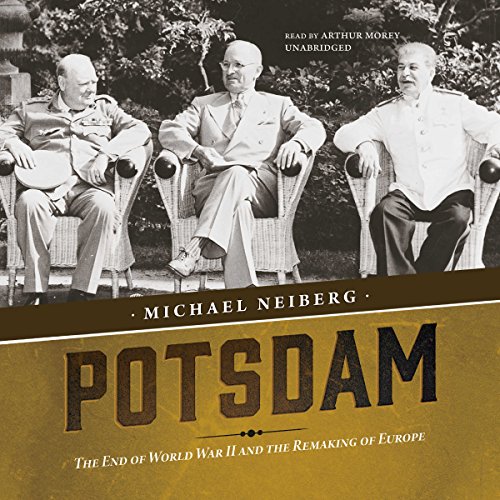 After Germany's defeat in World War II, Europe lay in tatters. Millions of refugees were dispersed across the continent. Food and fuel were scarce. Britain was bankrupt while Germany had been reduced to rubble. In July 1945 Harry Truman, Winston Churchill, and Joseph Stalin gathered in a quiet suburb of Berlin to negotiate a lasting peace - a peace that would finally put an end to the conflagration that had started in 1914, a peace under which Europe could be rebuilt.

Award-winning historian Michael Neiberg brings the turbulent Potsdam Conference to life, vividly capturing the delegates' personalities: Truman, trying to escape from the shadow of Franklin Roosevelt, who had died only months before; Churchill, bombastic and seemingly out of touch; Stalin, cunning and meticulous. For the first week, negotiations progressed relatively smoothly. But when the delegates took a recess for the British elections, Churchill was replaced - both as prime minster and as Britain's representative at the conference - in an unforeseen upset by Clement Attlee, a man Churchill disparagingly described as "a sheep in sheep's clothing". When the conference reconvened, the power dynamic had shifted dramatically, and the delegates struggled to find a new balance. Stalin took advantage of his strong position to demand control of Eastern Europe as recompense for the suffering experienced by the Soviet people and armies. The final resolutions of the Potsdam Conference, notably the division of Germany and the Soviet annexation of Poland, reflected the uneasy geopolitical equilibrium between East and West that would come to dominate the 20th century.

As Neiberg expertly shows, the delegates arrived at Potsdam determined to learn from the mistakes their predecessors made in the Treaty of Versailles. But riven by tensions and dramatic debates over how to end the most recent war, they only dimly understood that their discussions of peace were giving birth to a new global conflict.

Richly told account of the end of WW2 that leaves you wanting to know more. There were frequent comparisons with the end of WW1 that help contextualize the wars and their aftermath. I especially enjoyed the story of Truman assuming the presidency after being almost entirely ignored by Roosevelt, told nothing about the bomb, kept completely in the dark over what happened at Yalta. Neiberg even indicates that no substantive report was written about Yalta or what the agreements were. It's hard to imagine no one thought about the likelihood of Truman becoming president. Neiberg is generally positive and even handed about Truman.

The narrator was spot on & appropriately captured the gravity of the story.