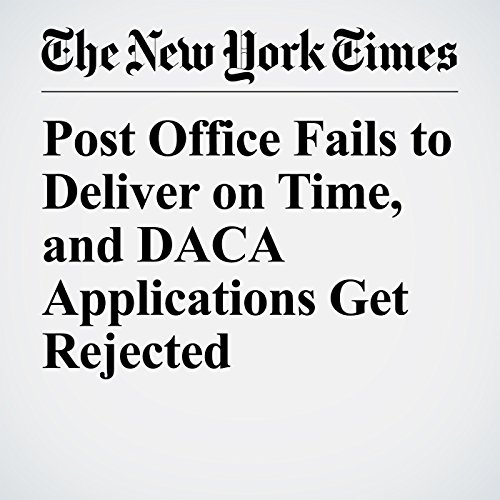 Post Office Fails to Deliver on Time, and DACA Applications Get Rejected

In Chicago, in the backyard of the U.S. Citizenship and Immigration Services agency, there were at least 21 DACA recipients whose renewals, sent well before the deadline, arrived late, according to Rep. Luis V. Gutiérrez, D-Ill. An applicant sent a renewal Sept. 13 and it arrived Oct. 6. Another sent the paperwork Sept. 21, and it was received Oct. 9. “Because somebody else did not do their job correctly, we are taking innocent young immigrants and making them deportable,” said Gutiérrez in a statement. “That is unacceptable.”

"Post Office Fails to Deliver on Time, and DACA Applications Get Rejected" is from the November 10, 2017 U.S. section of The New York Times. It was written by Liz Robbins and narrated by Barbara Benjamin-Creel.