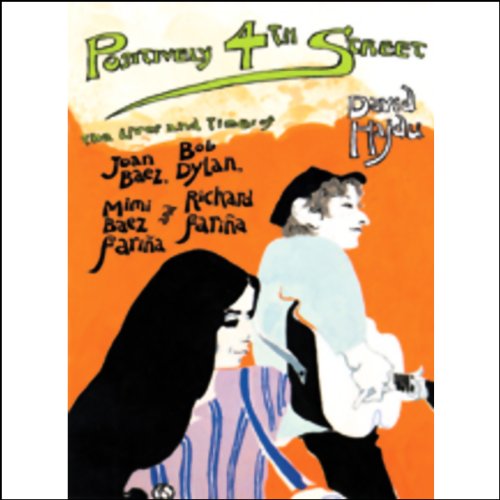 Positively 4th Street is a mesmerizing account of how four young people (Bob Dylan, Joan Baez, Mimi Baez Farina, and Richard Farina) gave rise to a modern-day bohemia and created the enduring sound and style of the 1960s.

The story of the transformation of folk music from antiquarian pursuit to era-defining art form has never fully been told. Hajdu, whose biography of Billy Strayhorn set a new standard for books about popular music, tells it as the story of a colorful foursome who were drawn together in Greenwich Village in the early 1960s and inspired a generation to gather around them.

Even before they became lovers in 1963, Bob Dylan and Joan Baez were seen as the reigning king and queen of folk music; but their songs and their public images grew out of their association with Joan's younger sister, Mimi, beautiful, haunted, a musician in her own right, and Richard Farina, the roguish, charming novelist Mimi married when she was 17. In Hajdu's candid, often intimate account (based on several hundred new interviews), their rise from scruffy coffeehouse folksingers to pop stars comes about through their complex personal relationships, as the young Dylan courts the famous Joan to further his career, Farina woos Mimi while looking longingly on her older sister, and Farina's friend Thomas Pynchon keeps an eye on their amours from afar.

Positively 4th Street is that rare book with a new story to tell about the 1960s: the story of how some of the greatest American popular music arose out of the lives of four gifted and charismatic figures.

"A hauntingly evocative blend of biography, musicology, and pop cultural history." (The New York Times)
"One of the finest pop music bios." (Booklist)

I have no idea who Bernadette Dunne is or what her credentials might be, but she does a terrible job of reading this otherwise adequate fragment of American history. Her attempts to "do" the voice of Bob Dylan or the accent of Dave van Ronk, and the arch snottiness of tone she inflects when speaking the words of Joan or Mimi Baez or Carolyn Hester make the whole deal almost unpalatable. As for the writing of David Hadju, he may be deliberately trying to dethrone the Kings and Queens of this story by playing up every instance in which one fabricated a life event or exaggerated a triumph. He comes across as quite contemptuous of the women of whom he writes, and largely unimpressed by the men, as well. While a position of abject worship is probably not suitible for such a production, he might have considered the audience for such a major work would be made mostly of real fans who don't appreciate his efforts to vilify.

Positively 4th Street is an able portrait of the intersection of lives (Joan Baez, Bob Dylan, Mimi Baez Farina, and Richard Farina) but does not "bring alive" the individuals themselves. There are lots of facts and stats (recording session held October 12, first meeting with X the very next week), many of which I did not know before. However, knowing about concert dates and set lists does not give me any sense of who and how these people were. I wish I had finished this book thinking that I understood them a little. Curiously, neither does this book provide much of a sense of the times these people moved in. I expected to understand what 1955-1965 felt like in the Village and Carmel but learned very little about this either. Nevertheless, the happenstance and coincidence of romance and business and art amongst the four title peronalities (and plenty of others) is interesting and is well contextualized by Hajdu. Content-wise, this was a pretty decent read.

I found the book very difficult to listen to. The reader uses accents and other voice inflections for various "characters" and I found them all to be irritating. She gives Bob Dylan a drunk, Southern, imbecilic voice I could barely tolerate for its inaccuracy(he wasn't Southern or an imbecile). Most of her voices seem to have a Southern drawl quality to them and I was constantly distracted by wondering why. Almost none of the people quoted in the book were Southern, so I began to think she had equating "folkiness" or naivete with being Southern. To do so here is inappropriate and misguided and rather undercuts Hajdu's thesis. Some of the reader's other character voices (particularly Mimi's abused, frightened child voice) were also grating, but not as damaging to the book's premise.

Make sure your iPod is loaded up with all your favorite folk revival songs while you're reading Positively 4th Street--you'll want to dip into your music collection as an appendix!

The book was surprisingly good and interesting.

The story of the rise of folk music in the 50's and 60's is like a big puzzle, as it came on the heels of McCarthyism, and a long poltical chill.

David Hadju's book, which tells the story of Richard Farina and Mimi Baez, provided a vital piece to that puzzle, and in so doing fashioned a dramatic frame with which to make this account compelling.

The rise of folk music, Joan Baez, Bob Dylan, and this milieu has a special place in contemporary social history, besides its entertainment value. The sudden popularity of folk music is an often overlooked story of that generation. Not only does it describe an aspect of a protest movement, but also the evolution of a niche of mass culture.

I chose this book reluctantly because the reader's voice had been denigrated by a previous review.. At first I thought perhaps there was merit to the criticism, but I became accustomed to the reader's voice, and felt her dramatic inflections and vocal characterizations added considerably to this book's many merits. I would have no hesitation to chose another book performed by this reader.

Anyone who has read Bob Dylan's Chronicles, would certainly find this this book a fascinating companion volume.

This is an excellent book that details the history of folk music as it relates to Joan Baez, Mimi Farina, Richard Farina, and tangentially Bob Dylan. As someone who does not like Dylan, this book affirmed my impressions of Bob Dylan and introduced me to people who were more interesting and inspiring than any contemporary musicians in the news.

I am not someone who likes folk music so I was surprised that the quality of this book is so good that it maintained my interest. Hajdu does a brilliant job putting events in chronological order and detailing the evolution of these different musicians and why their music evolved. The misogyny of the period is plainly described and Hadju uses first person quotes whenever possible.

The way the folk scene had moments of synchronicity, politics, and apathy are really interesting. I enjoyed this book quite a bit and became a fan of the Farinas in the process.

Gripping, exhaustively researched and masterful. Simply a tour de force. I'd read The Ten-Cent Plague, and was dazzled, but this was something else altogether...

Would you try another book from David Hajdu and/or Bernadette Dunne?

Would you ever listen to anything by David Hajdu again?

Probably not. It simplifies and doesn't reveal anything that resonates.

It is a variety of disappointing conventional impersonations. I am sorry for having to say that.

Folk music tangled up in blue

The characters are fascinating and the story reveals so much about interconnections and creative forces in music and literature that it's a wonder the author could have known so much, let alone presented it in such a compelling, coherent narrative. Just as important, Bernadette Dunne makes it all come alive. She was an ideal choice to read this book and she takes the listener through thick and thin. Hearing her was much better than reading it myself.

I just finished today this audiobook and must say that I enjoyed it a great deal. But, as the title reflects, there is one important caveat: to like it you must care about the subject matter. I certainly cared a lot about it as I was a young man in the 60's and thus maintain a vague memory of most of the events. This book provides a well-done filling in of the details. It held my interest and I was sorry that it ended.
However, I can almost hear someone say: "who cares"? The author delves into almost excruciating detail, so be prepared for that. The narrator is good. In summary, if you are a student of the 1960's get this and listen to it. You won't be sorry. Just be careful.

This book is strangely dull. I expected to find it interesting and nostalgic as I lived through those times but I didn’t find it that way. I think that the choice that the reader should dramatise the quotations with imitations of the voices of everyone quoted is particularly unfortunate and aggravating.