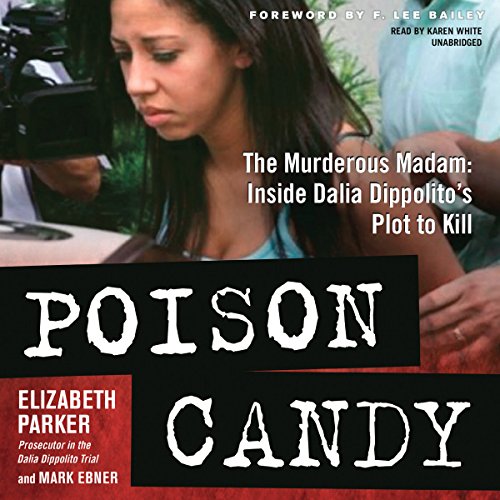 In August 2009 former madam Dalia Dippolito conspired with a hit man to arrange her ex-con husband's murder. Days later it seemed as if all had gone according to plan. The beautiful young Dalia came home from her health club to an elaborate crime scene, complete with yellow tape outlining her townhome and police milling about. When Sgt. Frank Ranzie of the Boynton Beach, Florida, police informed her of her husband Michael's apparent murder, the newlywed Dippolito could be seen on surveillance video collapsing into the cop's arms, like any loving wife would do. The only things missing from her performance were actual tears.

And the only thing missing from the murder scene was an actual murder.

Tipped off by one of Dalia's lovers, an undercover detective posing as a hit man met with Dalia to plot her husband's murder while his team planned then staged the murder scenario - brazenly inviting the reality TV show Cops along for the ride. The Cops video went viral, sparking a media frenzy: twisted tales of illicit drugs, secret boyfriends, sex for hire, a cuckolded former con man, and the defense's ludicrous claim that the entire hit had been staged by the intended victim for reality TV fame.

In Poison Candy, case prosecutor Elizabeth Parker teams with best-selling crime writer Mark Ebner to take listeners behind and beyond the courtroom scenes with astonishing, never-before-revealed facts, whipsaw plot twists, and exclusive details far too lurid for the trial that led to 20 years in state prison for Dalia Dippolito.

Would you try another book from Elizabeth Parker and Mark Ebner and/or Karen White?

What could Elizabeth Parker and Mark Ebner have done to make this a more enjoyable book for you?

Um... not written it? Or perhaps written a book on another case?

She was terrible. I honestly couldn't tell whether she was a computer or not. She seemingly paused every couple words like a text-to-voice thing and the inflection on the different voices was very, very slight. You could barely notice it so all you got, in the end, is this really terrible reader who pauses every other word or so. It was really frustrating.I know this book didn't have much to begin with but this narrator just made everything that much worse. I've actually put her name as the first on my 'never listen to again' list, which is new to me.

Disappointment in that this was made into a book and boredom.

The problem here is that there isn't enough for a book so everything is drawn out. You basically have a woman who tried to get her hubby killed (and failed) then was tricked into making the deal with a fake hit man (aka a detective.) That's all you have here. There's nothing else. This should not have been made into a book. Perhaps a 'Who the Bleep did I marry' 30 minute episode, but certainly not a book.

On top of that, I found the writers to simply be obnoxious. The authors kept belittling the wife in pretty every way when she was in a scene. I do believe that she is guilty, obviously. They have her on tape but it just grew really, really old really quick. Like all her tears were 'fake' or the authors would say something like 'and who'd honestly marry an escort?!' and it just made me want to chuck the book.Also, I felt that the authors tried to white knight the hubby. They were continuously trying to make excuses for his behavior. He was a petty criminal who failed at setting up a ponzi scheme. He owe almost 200k in fines and he hasn't paid anything while he's driving around in a porsche. Am I supposed to feel bad for him? I honestly don't feel bad. I honestly felt relieved that the wife wasn't pregnant because this hubby was just so freakin' stupid that it felt imperative to get his genes out of the pool, so to speak.

In short: everyone of the players were bad people and so were the authors (who, silly me, I'd expected to act like professionals.) I would skip this.

I liked the message, but felt that this book was far to long.

The fact that the protagonist was apparently so blind to his wife's bs was interesting. On the other hand this made the book redundant and it drew out a pretty open and shut case.

The narrators pace was fine, but her voice was obnoxious.

Could you see Poison Candy being made into a movie or a TV series? Who should the stars be?

This is a 48 hours or dateline special and I enjoyed the hour segment much better.

Odd title for this book.

I tried 3 times to listen to this book but the narration is so awful. I felt the narrator was a robot. I can not finish it but know I have to since I used a whole credit to purchase this book.

Amazing and scary and kinda sad, could not put down!

Best read book EVER! It was like a radio play, i love Brooks books!
My only complaint is why have to make it all
About blood guts killing?
Thank Jesus for Max Brooks!!

Much detail not heard before

While the reader’s voice bothered me at first, I found this to be a good book on Audible.
After I became accustomed to the reader’s cadence, I was enthralled in the details of the is case. This book covers many details that I had not heard prior.
I recommend this book. Hang in there, the readers. Get past the reader’s strangely “choppy” cadence and you will enjoy the listen!

It was very enjoyable to get an in depth background to all of the main "characters" in the Dalia Dippolito drama. However, Elizabeth Parker comes off sounding like a very full of herself prosecuting attorney throughout the entirety of the book, which at times can make you roll your eyes hard. Elizabeth Parker should have known that this is not a likable trait since she was after all; writing a book about a highly full of herself Dalia. None of the less, it is an interesting read if you want to know more about this case in greater detail. I would have rated it a 5 star overall if the author had been less of a braggart throughout this book.

How she thought she would get away with it defies belief....

listening to this book was definitely a struggle as the narrator sound like one of those computer voices. It was very staccato. I managed to get to the end because the content was informative and provided more detail

A fascinating story RUINED by a dreadful computer generated voice! Or at least one that sounds like one!
Strange inflections and bizarre speed changes! Never heard anything like it!
Unable to listen past 5 minutes!