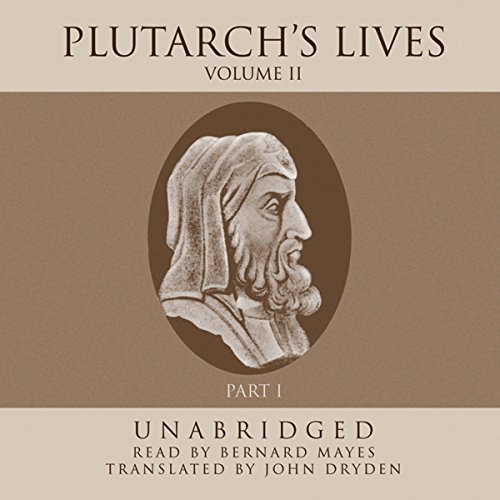 This book was the principal source for Shakespeare’s Julius Caesar, Coriolanus, and Antony and Cleopatra. It was also one of two books Mary Shelley chose for the blind hermit to use for Frankenstein’s monster’s education, with the other being the Bible.

Plutarch’s Lives remains one of the world’s most profoundly influential literary works. Written at the beginning of the second century, it forms a brilliant social history of the ancient world. His “parallel lives” were originally presented in a series of books that gave an account of one Greek and one Roman life, followed by a comparison of the two. Included are Romulus and Theseus, Pompey and Agesilaus, Dion and Brutus, Alcibiades and Coriolanus, Demosthenes and Cicero, and Demetrius and Antony.

Plutarch was a moralist of the highest order. “It was for the sake of others that I first commenced writing biographies,” he said, “but I find myself proceeding and attaching myself to it for my own; the virtues of these great men serving me as a sort of looking glass, in which I may see how to adjust and adorn my own life.”

This second volume includes Alexander and Caesar, Demetrius and Antony, Dion and Marcus Brutus, the aforementioned Demosthenes and Cicero, as well as biographies of Alexander, Caesar, Cato the Younger, and others.

“Plutarch is my man.” (Montaigne)
“Away with your prismatics. I want a spermatic book… Plato, Plotinus, and Plutarch are such.” (Ralph Waldo Emerson)

Biographies to Adjust and Adorn our Lives

Probably the best review, summary of this book was written by Plutarch himself, so why re-invent the wheel:

"It was for the sake of others that I first commenced writing biographies; but I find myself proceeding and attaching myself to it for my own; the virtues of these great men serving me as a sort of looking-glass, in which I may see how to adjust and adorn my own life. Indeed, it can be compared to nothing but daily living and associating together; we receive, as it were, in our inquiry, and entertain each successive guest, view

** Their stature and their qualities, **

and select from their actions all that is noblest and worthiest to know.

** Ah, and what greater pleasure could one have? **

or, what more effective means to one’s moral improvement? Democritus tells us we ought to pray that of the phantasms appearing in the circumambient air, such may present themselves to us as are propitious, and that we may rather meet with those that are agreeable to our natures and are good, than the evil and unfortunate; which is simply introducing into philosophy a doctrine untrue in itself, and leading to endless superstitions. My method, on the contrary, is, by the study of history, and by the familiarity acquired in writing, to habituate my memory to receive and retain images of the best and worthiest characters. I thus am enabled to free myself from any ignoble, base, or vicious impressions, contracted from the contagion of ill company that I may be unavoidably engaged in, by the remedy of turning my thoughts in a happy and calm temper to view these noble examples."
― Plutarch, Lives

* Not all the biographies in Vol 2 are comparisons (or said better, some are compared more and others are simply paralleled more).

Bad audio. Sounds like it was recorded in the 70's. Old man does not speak clearly.

The original source for many of Shakespeare's works & fascinating history. An excellent reading, marred slightly by over compression.

Great work shame about the reader

A work this important, that has shaped the way we think of history and formed the basis of a lot of English Literature should be rendered virtually unlistenable by a cod English upper middle class accent - even if it wasn't meant for the UK market it shows a slovenly lack of respect for the work - I'll go back and read it again for myself