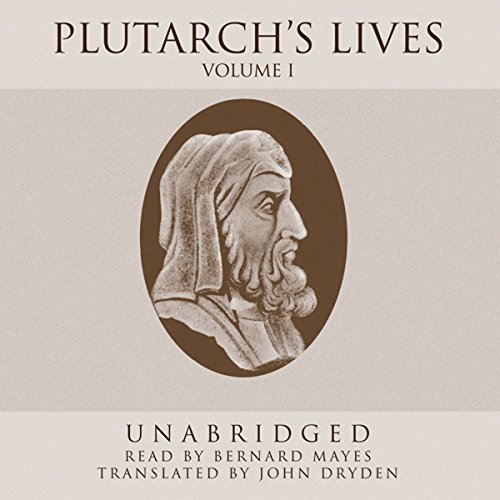 This book was the principal source for Shakespeare’s Julius Caesar, Coriolanus, and Antony and Cleopatra. It was also one of two books Mary Shelley chose for the blind hermit to use for Frankenstein’s monster’s education, with the other being the Bible.

Plutarch’s Lives remains one of the world’s most profoundly influential literary works. Written at the beginning of the second century, it forms a brilliant social history of the ancient world. His “parallel lives” were originally presented in a series of books that gave an account of one Greek and one Roman life, followed by a comparison of the two. Included are Romulus and Theseus, Pompey and Agesilaus, Dion and Brutus, Alcibiades and Coriolanus, Demosthenes and Cicero, and Demetrius and Antony.

Plutarch was a moralist of the highest order. “It was for the sake of others that I first commenced writing biographies,” he said, “but I find myself proceeding and attaching myself to it for my own; the virtues of these great men serving me as a sort of looking glass, in which I may see how to adjust and adorn my own life.”

The first of the two volumes in this translation by John Dryden presents Theseus and Romulus, Pericles and Fabius, Alcibiades and Coriolanus, Aristides and Marcus Cato, and Lysander and Sylla, among others.

This is an old translation that was somewhat modernized. Would have been far better to start fresh with a 21st century translation. At times this translation is stiff and vague. The reader sounds way too elderly in a few places. However, most of the time the reader is fine. Any Plutarch is better than none at all and I give this 4 Stars for my great love of Plutarch (even though he stop moralizing). I'm thankful to have this but would be happier if more modern translation came out with a better reader. Driving 300-500 miles a week for my job, I'll easily listen to this in it's entirety 7 times. This is the only complete Plutarch audio book I know. This is a great supplement to reading Plutarch and allows the listener an opportunity to 'view' this material from a different perspective. There's just so much historical information that listening can really aid in comprehending Plutarch's Lives.

This recording is exemplary of the all too common sloppiness and amateurishness in editorial control of audiobooks. Three serious faults recur constantly through this very long book: (1) Cuts between recording takes are loud and conspicuous, with narrator Bernard's Mayes sometimes even overlapping where breaks are clumsily spliced; (2) Background noise suggests poor soundproofing or poor equipment, presumably being jostled as Mayes moves and shifts his text during recording, with no editorial intervention to rerecord such poor quality sessions; and (3) The narrative is periodically interrupted with a woman's voice announcing that the book has been broken into smaller segments to make the download faster, and that you have reached the end of a part but not the end of the book -- legacy "junk" that no longer obtains, as the speed of download has improved and the method of playback has been refined so that the book is no longer so divided.
As to my rating of the "story," you are either interested in Plutarch or you are not and this ham-fisted rating system isn't really appropriate for this kind of book. Similarly, Mayes' performance is fine; the performance of the recording and editorial staff, however, is pathetic.

beyond this -- nothing but prodigies & fictions...

"...beyond this there is nothing but prodigies and fictions, the only inhabitants are the poets and inventors of fables" Plutarch, The Lives of the Noble Grecians and Romans, Vol 1.

Plutarch, one of the great early biographers summarizes the lives of Greek and Roman military and political leaders and compares them to illuminate the virtues and failings of their leadership. Vol 1., includes the following micro-biographies and comparisons:

The first two sets are more myth (Theseus v. Romulus) & folklore (Lycurgus v. Numa) and less biography, but it appears Plutarch realized that all history and biography NEEDS a beginning, even a vague and foggy genesis, and felt he would do a better job at it than another writer, thinker, biographer. Plus, he was teaching morals not history.

Most of these characters, leaders, politicians, thinkers in Vol 1 of 'Lives' I've come across in other classical writings, but Plutarch possessed a lot of information that current historians no longer possess, plus his approach is fairly no nonsense and pragmatic. I expect Vol 2 will be even more interesting as it heads into later "Noble" lives that are both more proximate to Plutarch, more well-known, and where more information is available. So far, however, I can see why early readers of the 17th-century translation by Dryden or 16th-century translation by North flocked to Plutarch mainly for his moralizing and less for his biographical skills.

Anyway, a wide reader can also see Plutarch's influence on Montaigne, Shakespeare, Boswell, Bacon, Hamilton, etc. IF he continues at this level or better this is one of those books I'm sure to travel back to both as a resource and a respite.

This is one of the greatest books I've ever read. It's not for everyone. Some people seem to think the Dryden translation is boring. I disagree. I loved it. Some people don't like this narrator. I completely disagree. I listened to him narrate "The Decline and Fall of the Roman Empire" too. One review I read said it perfectly: It's as if Gibbon himself is sitting down with you by a fire to recount to you the whole history of the Decline and Fall.

I'd recommend either having Google handy or have a pretty good knowledge or Romand and Greek history before reading this. Plutarch assumes you're familiar with a lot of that stuff and it would be a lot more tough to understand this book without such knowledge.

I did not find the narrator easy to listen to. he mumbles words together like an old.man

Endless Ancient Greek and Roman historical figures juxtaposed by an ancient author. If you like that kind thing, it's great.

Classical education required reading.
Wisdom to be gained here.
The Greeks and Romans continue to instruct us .

A mammoth undertaking for author and narrator!

The historical and cultural value of Plutarch's Lives goes without saying. It is a must read for anyone serious about developing literacy in classical western literature.

Lives is not easy to digest as a continuous narrative. Plutarch covers a huge amount of territory, and uses a fairly predictable template for each biography. While the narrator is good, it would have been better if there were multiple narrators, perhaps one for the Roman biographies and one for the Greek. It is just easy to lose focus listening to the same voice and cadence for so many hours!

I doubt anyone can listen to this recording! Just listen to the "sample" before you buy and you will notice the recording quality is so bad (...I didn't).. John Dryden must have recorded this either sitting at the bottom of a well or over a 1960s long distance telephone connection!

I read Plutarch's lives in Greek when I was young but thoroughly enjoyed listening to it and finding out how many details I had forgotten. This book is an excellent choice for anyone who is interested in this time period of Classical Greece and Rome. There is still so much to learn from the past. That's what the word "history" means in Greek, it comes from the verb "oida" which means to know.