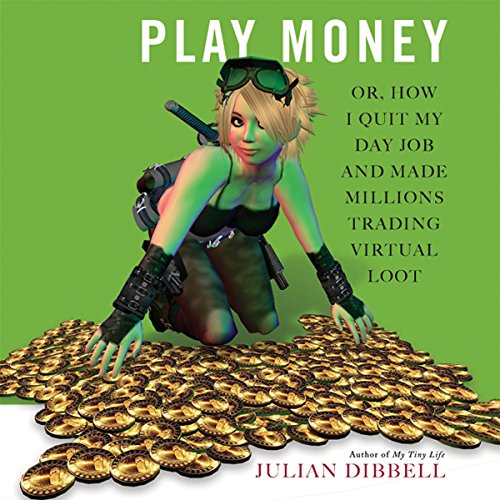 Play Money explores a remarkable new phenomenon that's just beginning to enter public consciousness: MMPORGs, or Massively MultiPlayer Online Role-Playing Games, in which hundreds of thousands of players operate fantasy characters in virtual environments the size of continents. With city-sized populations of nearly full-time players, these games generate their own cultures, governments, and social systems and, inevitably, their own economies, which spill over into the real world.

The desire for virtual goods - magic swords, enchanted breastplates, and special, hard-to-get elixirs - has spawned a cottage industry of "virtual loot farmers": people who play the games just to obtain fantasy goods that they can sell in the real world. The best loot farmers can make between six figures a year and six figures a month.

Play Money is an extended walk on the weird side: a vivid snapshot of a subculture whose denizens were once the stuff of mere sociological spectacle but now, with computer gaming poised to eclipse all other entertainments in dollar volume, and with the lines between play and work, virtual and real increasingly blurred, look more and more like the future.

Would you try another book from Julian Dibbell and/or Grover Gardner?

I'm a long time professional in the video game industry and I've viewed the birth of online worlds from a first person, often insider point of view, as such I was very interested to hear the story about his attempt to turn play into pay. And his insights while discussing his game/business exploits are very interesting but over half the book is him trying to sound philosophical about economic theory and how the old master's economic concepts are reflected in these new virtual in-game economies. Granted to a totally lay person, especially when he started, this would have been something grand and new. But these actions happened over 10 years ago and in the age of the internet you might as well be talking about pre-industrial businesses. The book ends before the launch of WoW and in MMO's everything is pretty much preWoW or post WoW as WoW (World of Warcraft) changed everything. So you can read this book and be somewhat entertained, I suggest skipping every part where he is not discussing actual game or game related events, but you can not read it and understand today's virtual economies anymore then you could read a book on the business of transportation before the advent of the airplane and attempt to apply any of it's lessons to today. WoW, Eve, DaoC, and others have redefined the space and it's just not the same thing anymore.

As to his attempts to compare economic theory to in game practices... Well it comes off to me a lot those times when you are discussing something with someone who has read an article or 5 and knows all the buzzwords to use but doesn't really understand where and how they really apply to the situation.


And lastly, the tile is pretty much a lie. He did not make millions in real money, he made millions in virtual in game gold. In real life, once converted he ended up making less then minimum wage. So the entire premise of the book, based on the tittle, is false and i'm more then a little ticked off about that. But it seems to be a trend with these books of "I'm going to do X for a whole year and accomplish Y". They only barely commit themselves and Y never seems to actually be attained. I read a book by a guy who said he was going to walk the entire Appalachian Trail. In the end he walk the first 1/5th and then give up and goes back and walks pieces of it here and there for the next few years and then claims "I did it". No you didn't and neither did the Author here. He starts off bold, "I'm going to quit my job and become an gold farmer" but in the end he is often distracted and never really commits. A recurring theme in the book.

Where does Play Money rank among all the audiobooks you’ve listened to so far?

I've only listened to it once so although I enjoyed the book a lot I'm not in love with it.

An interesting glimpse into the life of gold farming. Fun to go along with him through his adventures.

I should look him up, this was a good book and I would like to find more like it.

Was long and couldn't do that.

This book may not appeal to many adults who haven't discovered that games can be fun and a great part of their lives. Teenagers may not take the time to listen to it.

A bit dated now, but still an interesting read...

The book deals with an MMORPG that is off the radar for the most part, but still an entertaining listen. If you're interested in the online virtual world currency racket (I'm guessing this is a rather limited niche audience) then this book is not a bad choice. The book's main focus is Ultima Online, so don't look for WOW information. I didn't mind this because I played UO back in it's heyday, so it felt like a reunion with an old friend. Interesting book.

Of the hundreds of audiobooks I've listened to over the years, this was one of the most addictive and enjoyable. The writing sparkled, the narration was excellent, and the topic was deeply interesting to me. Excellent all around.

MMO Cowboys, Not for Noobs or the average player..

Yes, but only friends that had prior knowledge of MMO. Unless you are familiar with MMO terminology you will be lost.

I don't think the story itself needs to be changed its rather funny.But I bought the book for educational purpose which it falls short on..... a percentage of the things that are needed to be done are out of the grasp of the common MMO player. Such as Mexican and Asian gold producing sweat shops. Also a good percentage of the steps taken can be and are considered illegal which can lead to major losses.

I did like him, he can be a bit dry here and there but he makes up for it.

MMO Cowboys: The dealers and Traffickers of MMO contraband.

This will not break the boundaries if you understand economics or have played a lot of MMOs.

That said, it is a great tale which I could relate too

This book brings together businesses created around games and the fictional elements used within them. A must have at all costs. I want more Julian Dibbell!