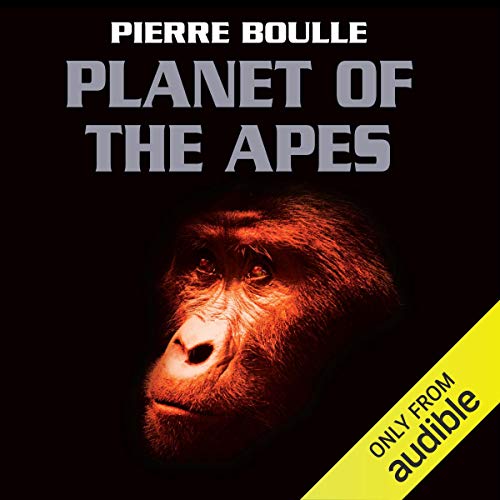 Greg Wise reads Pierre Boulle's chilling, iconic novel about a nightmare world where apes rule over men. In a spaceship that can travel at the speed of light, Ulysse, a journalist, sets off from Earth for the nearest solar system. He finds there a planet which resembles his own, except that on Soror humans behave like animals and are hunted by a civilised race of primates. Captured and sent to a research facility, Ulysse must convince the apes of their mutual origins. But such revelations have always been greeted by prejudice and fear...

The inspiration for several acclaimed cult films, Planet of the Apes is both a gripping, disturbing fable and a classic of science fiction.

This was an excellent book, even if you've enjoyed the original film (and who hasn't?). You can clearly see the inspiration for the classic movie, but the book moves in a slightly different direction. You will find the principle characters of Nova, Cornelius, Zira, and Dr. Zaius. Beyond that, I won't divulge any specifics about the story, as it has its own little twists and turns. For the Planet of the Apes completist, I say quit monkeying around and listen to this one!

Even if you're very familiar with the classic 1968 Charlton Heston movie, there are a few surprises and plot twists here that make this an interesting and exciting listen. The main character is Ulysse, a French journalist who journeys with two other intrepid astronauts to the distant star, Betelgeuse, where they, of course, come upon the Planet of the Apes, inhabited by primitive humans and technologically advanced chimpanzees, gorillas and orangutans. The themes are somewhat different from those of the movie, but this is a well written and exciting book with a tightly-constructed plot, which also raises interesting questions about the ethics of animal research and social behaviors which can bring about the death of a civilization. Well narrated.

I have not criticism to offer

I love this book so much that I was sad that Pierre Boulle had no other books on audible to offer. He does an excellent job of verbalizing the main characters frustration with trying to prove his intellect to the apes without losing his mind.

Nova, she's definitely not that bright but I do appreciate that she gets smarter... maybe not smart enough to graduate from the third grade but it's a start.

The end... I have nothing left to say about it but it was quite the ending.

If I didn't have to work and eat, I would have listened in one sitting.

The Movie was good, but the book is even better

Years ago I saw the planet of the apes movies and thought they were excellent science fiction movies. I stumbled onto this audio book and took a chance on it - so glad I did. I always thought that the original movie had an iconic ending, but honestly the ending of the book is even better. The writing is clever and the story line unique. The characters are interesting and well developed. The narrator does an outstanding job. It is just an excellent book, if you enjoy science fiction I would highly recommend this book. The ending is a complete surprise, very different from the movie.

GORILLAS ARE MEAT EATERS
This is a great intelligent read. If you pick this up looking forward to the campy war like gorillas in the movie, you will be disappointed. Gorillas are the physical ones, they do hunt and kill humans, but instead of wearing leather, they wear the clothes of gentlemen.

ORANGUTANS
They are the stogy heads of science. THEY READ BOOKS, THAN WRITE BOOKS, REPEATING WHAT THEY READ. They have little imagination, but lots of power. I am wondering if Boulle was making a statement about a certain group of scientists?

The Chimps
All science advancements come from this group. They are they opened minded ones with imagination.

The story
This is more of an intellectual read with discussions on evolution, devolution, treatment of animals in labs and much more than the movies. The movies are good, but they went they way of more violence to get the ratings. I like the book, much better. The book has it's own twists and turns, that goes one better than the movie. Writing is superb, with plenty of story and intensity.

It is a classic for a reason. The plot is great and reflects the author’s thoughts and mockery of the human nature.

HOWEVER, I can not overlook the misogyny from the book that leaves a really bad taste in my mouth. How the main chat goes to a strange planet and all the people are good looking and he gets the prettiest young girl as well as a female ape soulmate that’s so devoted to him. Also hate the part where he says motherhood change Nova and makes her more intelligent. The thought of him being caught by the chimps for brain experiments makes me so happy. The story ends with them on a voyage in space and I truly hope they get caught by chimps soon.

Much different than the movie

I enjoyed it very much especially the ending Which Leaves Room for sequels.I did not know it was French and the monkeys didn't speak English Or french

This is a really good book!

I believe this book deserves a 4.9 stars rating. I was unable to anticipate most aspects of this story. This is a really good story!

loved finally listening to Planet of the Apes. never having a chance to read the book. Great narration. easy guess to ending, but still a delightful and exciting book. must read or listen to others in the series

I never knew the Planet of the Apes was a French novel. I truly enjoyed the original story. I really like how it was told from a journal/letter documeting the protagonist incredible and at frightening journey/experience. I also enjoyed recalling how certain aspects of this amazing story have been depicted in all of the various movies. The ending left me grinning with astonishment. A wonderful read!

Forget the statue of liberty

Would you listen to Planet of the Apes again? Why?

Probably not. I originally read it just so I know the "true" beginning of the film and TV etc phenomenon that is still active after nearly half a century. I ended up enjoying it in its own right, but its revelations are unlikely to surprise a second time.

What was one of the most memorable moments of Planet of the Apes?

It amused me that, according to the book, French will be the lingua franca in the far future. The landing on the alien planet was intriguing - and by the way, is emphatically not Earth. Honestly, what are the chances of a spaceship doing a 180 at the crucial moment and nobody realising? Imagine Neil Armstrong saying, "Tranquility base here, the Eagle has... hang on, that looks like Florida!"
There are some uncomfortable moments with the woman Nova - she really isn't treated well at times, but given how brutal the apes can be towards humans, I suppose she got off relatively lightly.
The main character's relationship with the chimpanzee Zira is... quite interesting. As I recall it was implied in the film, but here it's a little more explicit.
And there is a twist that is so much better than finding the Statue of Liberty, but to be fair it's not filmable.

Have you listened to any of Greg Wise’s other performances? How does this one compare?

No. The ones he's done so far are books I've read already or which don't interest me.

No, it's not a short story.

Satirical elements often throw me out of a story. This one didn't.
It would be nice if Boulle's other well know novel - Bridge over the River Kwai - could be made available on audio.

The obvious lessons taught by this story are even more relevant today than when first published.
Very well narrated.

Still a great read if you think you know the story

You will no doubt reference against the original film, this book is the origin to that and can standalone.

Different to, but just as good as the films.

I've always enjoyed the original series of films, and certainly the most recent two 'reboots', but until now hadn't read/listened to the original story. This was largely as I'd never come across it. Needless to say it is both more low-key and more interesting in it's development. It varies from the films' storylines in crucial ways, including the iconic scene from the very first film. Nonetheless it has a strong twist which it carries well. I don't know of Pierre Boulle's thoughts behind the story: did he intend an interesting sci-fi Twilight Zone type story, or perhaps a variation on racial awareness, war, or perhaps nothing else at all. Nevertheless, it's well worth hearing and Greg Wise does a decent job of narrating the tale. I'm surprised that I haven't come across more of his work with audiobooks.

didn't turn it off for the first five chapters, loved reading it as a kid. Love this audio version. narrative is very good compared to some.

Ok but has not aged well

Anyway, it is one of the classics and worth a listening.

Apes are not monkeys

I enjoyed this book it had a good story and good characters but the over use of the word money is quite annoying. I know this book was written by a french man and in french the word for money and ape is the same “singes”. The thing is there are no baboons or any other monkeys, now it may have been lost in translation but it was quite annoying.

I'm marking this down to 3 stars for the bad chaptering by Audible but 5 stars for performance and story.

Great story read brilliantly by the narrator Greg Wise about some astronauts who crash land on a planet run by apes, but I wish Audible would sort out how they do chapters. According to Audible it is chapter 38 but the narrator says chapter 12 so Audible makes it hard to navigate the chapters. Come on if you're narrating the book and it says chapter 1 or 12 that's what the chapters should be in the audio book.

A very intriguing, and, at times, a tense story, helped along by Greg Wise's narration.

Quite a good book, I preferred the original film with Charlton Heston. Three French men travel on a space ship where they find a planet inhabited by backward human beings and intelligent apes.
The apes are the masters of the planet and the humans behave like wild animals..
The narration is quite good but I have listened to better narrators on other audio books.