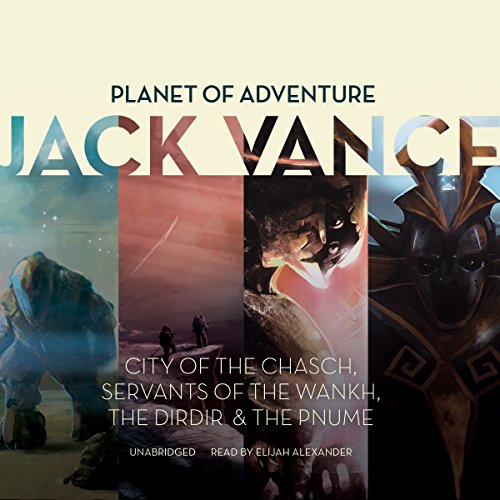 Stranded on the distant planet Tschai, young Adam Reith is the sole survivor of a space mission who discovers the world is inhabited - not only by warring alien cultures but by human slaves as well, taken early in Earth's history. Reith must find a way off the planet to warn Earth of Tschai's deadly existence.

Against a backdrop of baroque cities and haunted wastelands, sumptuous palaces and riotous inns, Reith will encounter deadly wastrels and murderous aliens, dastardly villains and conniving scoundrels - and always the random beauty in need of rescue.

One of my favorite stories. This was narrated so well it transports you to the planet tschai (sp?).
I even got pulled iver for speeding because I wasn't paying attention the story was so well done.

OMG! I didn't want the story to end! Wonderful!

Would you listen to Planet of Adventure again? Why?

I was really bummed when the story ended. Was a classic adventure of a close knit team of friends who started out as strangers. The escapades and challenges they got into where spell binding and I hated leaving the car and turning the story off! A MUST READ/LISTEN!

Planet of Adventure is a set of four short novels by Jack Vance: City of the Chasch (1968), Servants of the Wankh (1969), The Dirdir (1969), and The Pnume (1970). They depict the adventures of a resourceful earthman, Adam Reith, as he attempts to buy, steal, or make a spaceship in which to return to Earth from the planet Tschai, where he has been stranded (212 light years away). His goal is difficult because "On Tschai both virtue and vice were exaggerated." Its denizens lack chivalry and decency as they pursue personal advantage and are prey to volcanic joys and rages that make the people of earth seem sedate. "Evil?" A character asks Reith at one point. "On Tchai the word has no meaning. Events exist--or they do not exist." His goal is also difficult because the locals treat his supposed earthly origin as dangerous heresy. (Hence he becomes evasive: "I have learned that candor creates problems.")

Tschai is populated by four sentient alien species, the Chasch, Wankh, Dirdir, and Pnume, by their modified human servants (Chaschmen, Wankhmen, Dirdirmen, and Pnumekin), and by a "bewildering diversity of human types," ranging from pirates, cannibals, and marsh-folk, to nomadic mechanics, ultra-civilized Asiatics, and gray mongrels. As a local tells Reith, "men are as plastic as wax." Being a vivid world (possessed of pink and blue moons), Tschai also hosts all manner of exotic and often dangerous flora and fauna.

What in the first book is heading for a John Carter pastiche (with Adam Reith bringing independence to subjugated people and starting a romance with a Dejah Thoris type) morphs into something else by the second. Although the backbone of the novels is basically what Reith says more than once, "We are men," and in his peregrinations he tries to instill in the people of Tschai a little human get go and pride, far from seeking to liberate and unite all cultures on Tschai and settle there, he wants to return to earth, primarily to warn humanity there of the threat posed by the Dirdir (who millennia ago visited earth to get human slave stock to use on Tschai).

Planet of Adventure is full of Vance's ironic understatement ("The inhabitants are far from cordial"), dry humor ("A person who calls facts absurdities will often be surprised"), roguish conmen (everyone is out for the main chance), strategic manipulation of contractual language (when bargaining for the return of a friend be sure to stipulate that the person be returned alive), episodic plotting ("Events sometimes display a vitality of their own"), and vivid descriptions of exotic scenes ("For a long period the sea rose and fell in fretful recollection, but dawn found the Charnel Teeth standing like archaic monuments on a sea of brown glass"), cities ("plazas and piazzas of wind scoured concrete"), creatures ("It was over eight feet in height, in its soft black hat and black cloak, like a giant grasshopper in magisterial vestments"), and couture ("They wore long-billed black caps crowned by jawless human skulls, and the plume of hair rose jauntily just behind the skull").

"It occurs to me that the man in his religion are one and the same thing. The unknown exists. Each man projects on the blankness the shape of his own particular world-view. He endows his creation with his personal volitions and attitudes. The religious man stating his case is in essence explaining himself. When a fanatic is contradicted he feels a threat to his own existence; he reacts violently."

It is also full of cool Vanceian concepts, among them the sentient Emblems that shape the behavior of the steppe nomads who wear them; the cult who correctly believes that humanity derived from another world but who irrationally tries to contact the planet via telepathy; and "the multiple sexuality" of the Dirdir, whose males each have one of twelve varieties of sexual organs and whose females each have one of fourteen, most of which are incompatible with each other.

Although Vance imagines myriad exotic cultures with outre systems of fashion, alimentation, reproduction, recreation, religion, punishment, and music, he conveniently arranges things so that everyone speaks essentially the same language, glibly explaining the phenomenon as deriving from the intensely heterogeneous nature of the inhabitants of Tschai. (That said, he does interestingly play with language by giving English words outlandish spins, as with "boisterous" for the Pnumekin; giving different cultures different non-English words and translating them into English, as with the Yao word "awaile"; and creating an exotic and subtle, chime-based writing system for the Wankh.)

Vance is no feminist here. In the first book appear grotesque man-hating Priestesses of the Female Mystery, in the second book something shocking happens to the Dejah Thoris figure, in the third and fourth books Reith and Vance have completely erased her from their memories, in the fourth book Reith muses about a new companion, "She was female and inherently irrational, but her conduct seemed to exceed that elemental fact," and the main players in all four books are male.

Elijah Alexander reads the audiboook perfectly, with clear pronunciation, effective pacing and emphasis, and just enough emotion and amusement for Vance's dry irony. He does a solid Reith (earnest and gruff) and is great with Reith's mismatched complementary friends, Anacho the renegade Dirdirman (condescending and drawling) and Traz the renegade nomad (youthful and terse).

Although Reith can sure kill and is not above stealing at a pinch, he is the moral compass of the novel, acting in good faith, sticking by his friends, and avoiding needless killing in cold blood. His superiority to the venal and treacherous people he meets is one reason I find Planet of Adventure less impressive than Vance's Lyonesse Trilogy and Dying Earth books, populated as they are by anti-heroes. It's also less consistently and convincingly realized. So I recommend those other works before Planet of Adventure.

Gateway Vance, many have started here

Jack Vance handles otherworldly races and cultures like no other author, with intelligence, a playfully undeniable logic, wit, and an affinity for quirks and odd details. Over four novels, the fantastic and bizarre world of Tschai is revealed as the tale of Adam Reith fully lives up to the promise of the series name. Essential 1940's-1950's SF, and this is a good reading.

Btw, the title of the collection and its list of volume names are still misprinted here. It should simply be:

Overall, a fun romp across a dangerous alien world. Noticeably sexiest at times, but considering the times Jack Vance can be forgiven. Nowadays, you can see how several modern Sci-fi stories, such as Stargate and Predator, were influenced by this. The voice acting gets very annoying at times, but don't let that stop you if you're curious. Adam Reith's trek across Tschai and through nefarious alien plots is a damn good journey.

This reading brings this to life!

I've read this series countless times over the last 20 years.
But Elijah Alexander's reading brought this book to life. Especially now that I can't read text that well anymore.
I felt as if I were really out on the windswept steppes running from the Night hounds with crafty Thangs waiting to cheat me at run down hostels.

this is an amazing journey

All of them. I give life to them. Naturally Anacho stands a bit higher because he is so well interpreted

Yes absolutely. This is a book that has you traveling across an entire planet to find your way home again.

Tschai is apart. It hasn't aged and it remains a delight. The audiobook is extremely good to make it alive. Great job.

I consider this book to be a guilty pleasure book. There isn't any deep intellectual analysis or the like, but it is escapist fun.

Note: this is an omnibus edition of "The City of the Chasch," "The Servants of the Wankh," "The Dirdir" and "The Pnume." Those 4 books are available separately on Audible, but really, this is one novel spread out over 4 books.

The story is pulp sci-fi in terms of plot (space explorer crash lands on strange planet, finds companions and has adventures while trying to get home), but Jack Vance built a varied, interesting and complex world with complex, interesting and varied alien species that are believably dangerous. Also, Vance's writing was more complex and literary than most pulp sci-fi of its class.

I very much enjoyed these books in print and I found the Audible edition to be a good way to enjoy them again.

The narration was good overall...it didn't add much but it definitely didn't hurt the book, either.

Maybe his best (and that is saying something). I hadn't "read" it in a long time. Very enjoyable

excellent tale with alien races on a far planet

this is an excellent tale with alien races, few native and most colonizers from mutually hostile worlds, one of whom brought humans to a planet orbiting a distant star

This was written in the 60s so is showing its age a bit (eg the lack leading female characters) but its still an entertaining story. The narration could be better, particularly the voices, but its by no means poor.

The delivery is excellent in every sense

Adam Reith, sole survivor of an Earthship shot down over remote planet Tschai, finds a most mysterious, exotic world, inhabited by humans and 4 alien races that subjugate them.
Reith is resourceful, decisive yet compassionate.
Solid old school sci-fi. A to Z storytelling. Told through 4 books.
One of many stand out scenes are when Reith & his 2 companions enter the dreaded Carabas game preserve , swarming with Dirdir hunting for men.
Elijah Alexander's narration is excellent.
These 4 books could make exceptional films.
Such an intriguing, exciting tale, so colourfully written, I recommend a visit to Tschai.