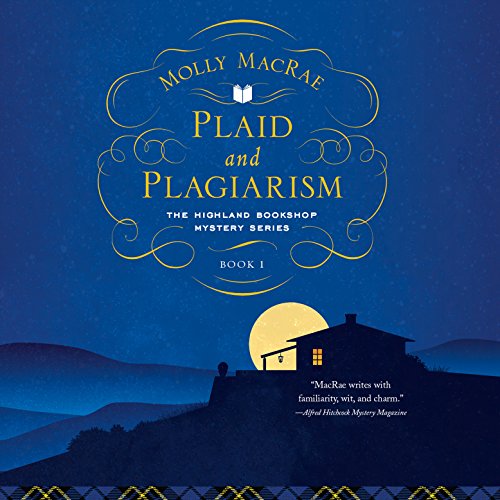 Janet Marsh's move into her house has been delayed due to vandalism. Then, when the women go to look for clues that might tell them who is guilty, they find a corpse (murder!) in Janet's garden shed.

Constable Hobbs answers their emergency call. He's calm and quietly pleased, as he's never had a murder case. Then the contents of a dozen or so garbage bags are discovered behind the bookshop. The letters inside are nasty. The more the women find out about Una, the more people they discover who detested her and aren't sad she's gone. If Janet and her bookshop crew are reading the clues right, they're about to expose the most sensational story the town of Inversgail has ever heard.

Excellent book in a great setting

Janet moves from Iowa to Inversgail, Scotland to buy a bookshop and open a tea shop along with her daughter, her best friend, and her daughter's friend. When she goes to move into the home she and her ex-husband bought 30 years earlier, she finds the kitchen full of rotting, stinking garbage. Her estate agent suspects Una, the local popular agony columnist, of committing this vandalism, so when Una is found murdered in Janet's shed -- well, really, her rat of an ex-husband's shed -- the police arrest the agent, though they soon let her go.

The four women get busy learning the ins and outs of running their new bookshop and preparing a tea shop and bed and breakfast, but the murder and vandalism keep getting in the way, forcing the women to use their individual skills to find a solution.

I usually like something about all narrators, but I was especially blown away by Elaine Claxton's narration. Most British readers have difficulty with American accents, but she handles those deftly and also does a terrific Scottish accent as well. I really was greatly impressed by this narrator.

This book is really well written and highly enjoyable. I look forward to reading what I hope will be many more books in this series.

Where does Plaid and Plagiarism rank among all the audiobooks you’ve listened to so far?

I would "rank" it by saying that this is a book I will most definitely listen to more than once.

What other book might you compare Plaid and Plagiarism to and why?

I have listened to every book by this author. I wouldn't be able to choose one favorite but as an engaging story that is well written and well narrated, this book fits right in.

The narrator goes seamlessly from Scottish to Illinois accent. I question her pronunciation of a few words but I could be wrong. This was an excellent narration.

Crime solved over tea and scones.

I recommend this book as well as the author's last series, "Haunted Yarn Shop Mysteries" as a great introduction to Cozy Mysteries.

I enjoyed the characters and the plot. The narrator did a very good job with the accounts . I look forward to reading the next book in this series.

The very first plus for this story as an audible selection is that the narrator, Elaine Clapton manages all her characters and accents so very well. It was a joy to listen to!

The next plus is that conversations are not punctuated by profanity. This is a rare occurrence in many novels today. Thank you Molly MacRae!

With all the various stories being told throughout, there was lots of speculation as to who done-it...but all the way to the end it held my interest. I can’t wait to start book two!

Had potential but the story moved to slow. Could have been edited and shaved off a few hours without loosing the context

The narration doesn't help. Very flat and very, very hard to tell which character is speaking. But basically, although the setting should be interesting and the mystery gets one's attention, the characters are remarkably unlikable, down right stupid and not credible. Hoped to continue the series but no way!

I liked the story..took me bit to sort out the characters. I listen in fairly short spans of time but i.don't mind backing up a chapter if I lose track of the story line.

The main characters are good, but the mystery has too many conflicting facts that are left unanswered. The ending is rushed in the last 30 mins with no real clues as to the murderer or why.

This one is probably better to be read. The narration gets confusing, The American woman still has a bit of a brogue sometimes. And it took way too long for them to ask what was going on. Got irritated about 2 hrs in.

Great New series...Not to be missed!

Would you listen to Plaid and Plagiarism again? Why?

Yes, I would. It was a great story and was narrated well by Elaine Claxton.

What other book might you compare Plaid and Plagiarism to, and why?

I don't think that I can compare Plaid and Plagiarism with any other book. For me it stands well on it's own.

Have you listened to any of Elaine Claxton’s other performances? How does this one compare?

No, so I have nothing to compare it with.

Moving location can be deadly!

Loved the story. It was well written and plotted, with plenty of twists and turns keeping you guessing until the end.