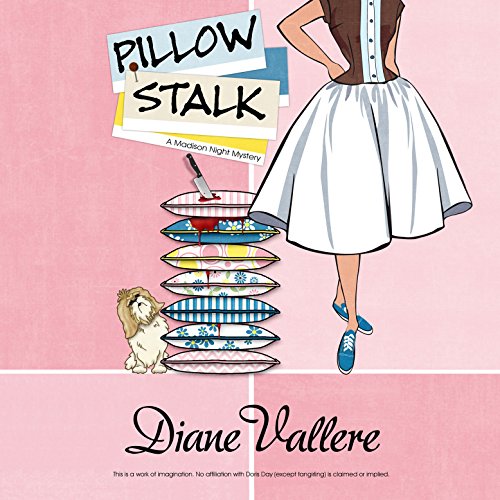 Interior decorator Madison Night might look like a throwback to the 60s, but as business owner and landlord, she proves that independent women can have it all. When a killer targets women dressed in her signature style - estate sale vintage to play up her resemblance to fave actress Doris Day - what makes her unique might make her dead. The local detective connects the new crime to a 20-year-old cold case, and Madison's long-trusted contractor emerges as the leading suspect. As the body count piles up, Madison uncovers a Soviet spy, a campaign to destroy all Doris Day movies, and six minutes of film that will change her life forever.

Wow. Can't remember when I last read something quite so rediculous. I'd call the plot far-fetched, but that would imply a modicum of imagination. This story, instead, was a hodgepodge of such implausible and utterly unconnected twists that it seemed the author was picking them out at random from some sort of a "Mystery Writing for Dummies" manual. Seriously, the cop used to date one of the victims who once hitched a ride with the creepy heartthrob whom the main character has the hots for, but in the end it's really all about Russian spies and astronauts drowned in a sea of factual errors. Oh, and then the ex-boyfriend, who does not figure in the plot at all except as a feeble explanation for why the protagonist can never love again, gets shot by some really bad, but completely unknown to the poor reader, bad guys. This masterpiece's protagonist made me cringe, but not in a good way -- more with embarrassment for all those women who, apparently, like her so much that they read the entire series. Since strong female leads are a must nowadays, the author keeps insisting that her character is independent and emancipated. All I could see was dim-witted, neurotic, self-absorbed, and just really plain unlikable: When an innocent high-scool girl is murdered by mistake in her stead, the main character reacts by shuddering at the thought that it could have been her. Sorry I gave away the entire book, but, trust me, you did not miss much. I kept listening with sick fascination at the sheer awfulness of it until the end, but I am returning this book to Audible. Thank you, Audible for making it possible. Giving it two stars since I know that writing even a bad book takes hard work, so the second star is for effort. I am certain the author will forgive my brutal review since she clearly has an audience of happy customers who read her stuff which she is cranking it out at a steady place. I just wanted to leave a fair warning for those who, like me, appreciate a clever, well-constracted mystery with appealing characters. This one ain't it, y'all!

Excellent beginning to a new series

Diane Vallere has written an excellent beginning to a new series. I look forward to the next installment. Susie Berneis gave a wonderful performance as she brought it all to life.

it is fun to have a book read to you

I'm not an edge seating person. I immerse myself in the books I read or listen to. This book is great with various characters that were great to identify with.

Have you listened to any of Susie Berneis’s other performances before? How does this one compare?

This was my 1st

I read for fun not to review a book.

A decent mystery but the last few chapters turn completely ridiculous. There's some cruelty to a cat the main character is supposed to be "caring for", and a police officer who finds sexual harassment entertaining, and those things just kind of rubbed me the wrong way. But the mystery itself is good and keeps you guessing.

It took awhile but worth the wait

It took awhile for me to get into the novel. There was something initially annoying about the reader and the protagonist that turned me off. But I kept on and am glad that I did. Good mystery, plot twists and touches of humor.

This was an okay mystery. The biggest problem was the narrator. I didn't like her voice. I will probably get the next one.

The narration is great and the story engaging, but I marked it down a little because the policeman is so irritating and overbearing and the main protagonist just lets him get away with treating her like a doormat.