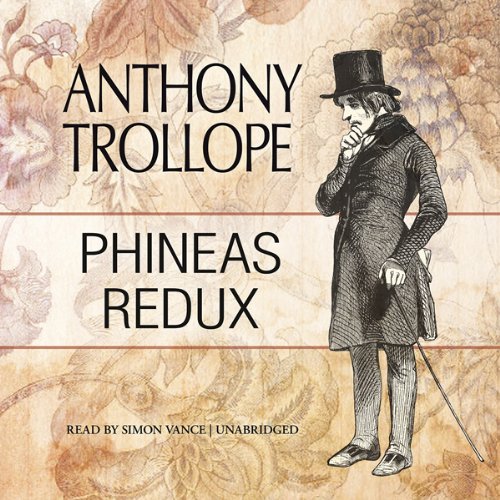 His beloved wife having died in childbirth, Phineas Finn finds Irish society and his job as a poorhouse inspector dull and unsatisfying, particularly after the excitement of his former career as a Member of Parliament. Back in England, the Whigs are determined to overturn the Tory majority in the Parliament of the United Kingdom. Since Finn had once been considered the most promising of the younger set, he is encouraged to run for office again. Bribery, romance, and murder are peppered throughout this Trollope novel.

The fourth novel in the Palliser series, Phineas Redux stands alone as a compelling work of political intrigue, personal crisis, and romantic jealousy.

“There are certain chapters in the middle of  Phineas Redux that are Trollope at the highest power.” (Sir Hugh Walpole, English novelist)

Yes. I have enjoyed reading the whole "Palliser" sries by Trollope, but the two books about our hero - Phineas Finn were the most enjoyable. Set in the late 1880's they are a gentle satire about the "game" of politics that resonates today.

What other book might you compare Phineas Redux to and why?

Before reading Phineas Redux, readers should try Phineas Finn as this is the story of his first foray into politics, while Phineas Redux is his return.

There were many moments, but the whole book was an ejoyable journey into a different time and palce.

For all lovers of the Victorian novel

It doesn't get any better than this. It will be good if you have listened to the other novels in the series, most importantly, Phineas Finn. Timothy West is the very best reader of these novels -- how can he do all the voices so expertly? He helps you appreciate the language far more than you could if you were reading.

Trollop’s character development continues to impress and entertain me, but this plot is even more satisfying than the first two books in this series. Great twists and suspense!

Of all the Trollope novels, and I think, in a long life, I have read most of them them, if not all; I think I have enjoyed this one the most. Simon Vance's performance is past marvelous. He gives us a performance. He acts. He is able to switch between the varied voices and emotions of Trollope's always finely hewned characters seemlessly. I found myself happily enmeshed in these lives. He differentiates between the voices of each of the many characters, so you always know who is speaking, even in multi peopled conversations.

This book is full of 18th Century politics, which I find fascinating. I don't think any other novelist of his day took it on. In this novel Trollope could be the Gore Vidal of his time, with less scorn, and more wit, of course.

As is not true of Trollope's other books, this one he leaves us in suspense. I have just bought Phineas Finn Redux, and with the great Simon in charge once again, I look forward to the treat in store.