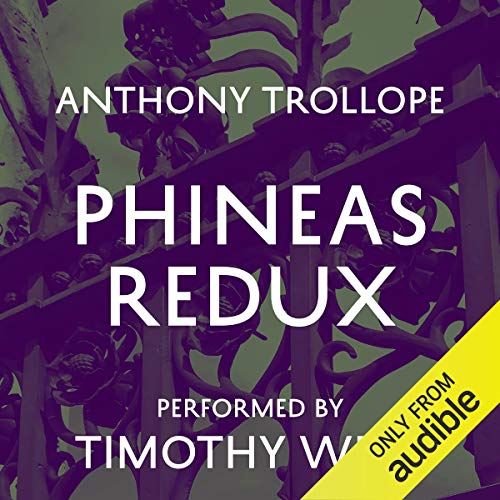 In the fourth of the Palliser stories, Trollope follows Phineas Finn's return to the dangerous world of Westminster politics after the death of his wife, Mary.

His career takes a turn for the worse when his political rival is murdered. With all the circumstantial evidence pointing at Phineas, he is thrown under suspicion and eventually finds himself standing trial at the Old Bailey. The situation is complicated by the presence of two women in his life: his old flame Lady Laura, whose estranged husband is determined to destroy Phineas' reputation, and the wealthy and enigmatic widow, Madame Max.

Trollope's ideas of political rivalries, bribery, injunctions, romantic entanglements and a scandal-mongering popular press seem as relevant today as they were in the 1870s. A story full of drama that echoes our modern day political world.

Trollope's work is regarded by some as among the greatest of 19th-century fiction and with his powerful political storytelling it's unsurprising that fans of Trollope's work have included former British Prime Ministers Harold Macmillan and Sir John Major.

Timothy West is prolific in film, television, theatre, and audiobooks. He has narrated a number of Anthony Trollope's classic audiobooks, including the six Chronicles of Barsetshire and The Pallisers series. He has also narrated volumes of Simon Schama's A History of Britain and John Mortimer's Rumpole on Trial.

Timothy's theatre includes King Lear, The Vote, Uncle Vanya, A Number, Quarter, and Coriolanus and his films include Ever After, Joan of Arc, Endgame, Iris, The Day of the Jackal. On television, Timothy has appeared in Broken Biscuits (BBC), Great Canal Journeys (across 3 Series), regular role of Stan Carter on EastEnders (BBC); Last Tango in Halifax; Bleak House, Bedtime and Brass.

Timothy West expertly performs a novel that might be more difficult to read on the page. To be honest, I don't understand all the finer points of parliamentary procedure, and since Trollope himself was so ironic about it all, an American reader can feel a bit at sea. West inobtrusively conveys the gist of things, and it's humorously clear that politics itself never really changes. Of course there are a few love stories to sort out, as well as a sensational murder trial. Very funny, occasionally very sad, and always very astute about human nature.

need not have read Phinneas 1

I'm very happy to see more of Trollope's Palliser novels on Audible - I listened to Phineas Phinn a couple of years ago and started the entrie series over to work up to Phineas Redux. I lked it best so far of the Palliser novels. Best of all, it lacks that overlap in storyline evident in so many of Trollope's works, hangover from the serialized versions - and the women characters come out more sympathetic. The anti-semitism of the period is toned down, too.

The courtroom drama part is as good as a modern day procedural, with Trollope's ironic humour added. The details of Parliamentary "action" may not interest Americans as much as Brits or Canadians but even those sections move along more briskly than in Phineas I. I hope the remaining two novels in this grouping come to Audible soon.

All in all, an excellently narrated Victorian listen - whether or not you've had the time for the story of the younger Phineas.

There is no better reader than Timothy West for this series. He is simply perfect. This performance transports the reader to another place and time. I feel I know the characters and whilst listening I become an observer to the most fascinating events. Beautifully written and superbly narrated. The sheer pleasure of this series is ineffable. Bravo!

This is a great book, but I've been reading through the series, so best to start from the beginning with these (although you'd get most of the story, but it seems silly not to). My only issue was that the audio quality (on the highest download setting) is a little strange. I think there are background noises in the recording. Didn't effect the good narration too much though. I guess Trollope novels take a long time to record.

A completely blissful experience! The kind or book I put off important work to read because I could not put it down!!!

Invested in these characters!

This is a very good series. Great characters, very forward thinking in terms of gender roles. And, of course, there is the incomparable narration of Timothy West. Recommended!

What did you love best about Phineas Redux?

Returning to old friends- Lady Glen, Madam Max, Lady Laura, Planty Pal and of course Finn. Building on the rich tapestry of their lives already built, this book is perfect for those who want to return to being a fly on the wall in parliament and social scene of London in 1860/70.

What was one of the most memorable moments of Phineas Redux?

Phineas and Madam Max meeting at the Harrington Hall for the first time since their last meeting in 'Phineas Finn'.

Have you listened to any of Timothy West’s other performances before? How does this one compare?

Timothy West is amazing as ever, adding so much with his amazing character voices and narrator boom.

The recording is frustrating in parts as someone is paying it back, and it's caught by the mic- so there is a faint echo-delay in the background, and the mobile transmission interference (you know it when you hear it!) is recorded several times.

I accidentally stumbled on Anthony Trollope novels about 3 months ago, and since then have dusted through 11.5 Trollope novels! I am now in the middle of the last book in the Palliser series, of which Phineas Redux is book 4. "Redux" is the second book featuring the character of Phineas Finn (the first is the second book in the series by that name), a young, impassioned, endearing Irishman who comes to London to make his mark in Parliament -- and among the social elite. By time we meet Phineas again in this book, we've been charmed by the adventures of young Phineas, and we meet him again as a more mature man resuming his public life after experiencing some pitfalls of life. This period in Phineas' life is a bit more serious than in the earlier book, giving him even more appeal -- like following a boy who has become a man. Some portions of the book were deeply moving as Phineas faces hardships of a more serious nature than most of Trollope's storylines, and Phineas is a character capable of taking us to this depth. Of course in addition to Phineas we continue to follow the lead characters of the Palliser series, Plantagenet Palliser and his wife, Glencora. A host of others who add to the drama and fun! These books are light, engaging, romantic - a nice fictional "snapshot" of British society and politics in the mid-19th century. Phineas is a standout character among many -- worthy of two books! If you like books of this period and theme, you'll love Phineas and entire the Palliser series, as I have!

Delicious in every respect

I’ve spent the pandemic listening to Timothy West read Anthony Trollope. The perfect reader for such sly, delicious, mordant humor. Reading one after another, with characters threading through from one to another is like - but much better than - being caught up in a 19th century Melrose Place, Dynasty or Knots Landing. Except so much better, wittier and engrossing.

I've listened to it right through, twice- with about 18 months in between the two, but I was still surprised how gripping it was on the second outing.

But spot the mistake! at the meeting of the hunt on Copperstream Common (or wherever it is) a character is said to be talking to Lady Chiltern when she is actually talking to Lord Chiltern. Trollope's mistake or Timothy West's?

I can only echo the previous reviewer : the combination of Anthony Trollope as writer and Timothy West as reader is, as always, superb. And in addition, this is Trollope at his best, with memorable characters and an exciting plot. Please, please, can we also have The Prime Minister and The Duke's Children? I'd love to complete the Palliser set.

Like those other Palliser novels read by Timothy West, this is first rate. When, oh when shall we get the last two, 'The Prime minister' and 'The Duke's Children'? Please, Audible...

Too much politics for me

Timothy West gives his usual magisterial performance, but I find this book rather hard going. I can't get very interested in the politics, and I've never seen anything very charming in Phineas Finn. As these two themes are the major ones of the book, it's possibly my least favourite of Trollope's major novels.

The character of Phineas Finn.

What was one of the most memorable moments of Phineas Redux?

When he was charged with murder.

Have you listened to any of Timothy West’s other performances? How does this one compare?

My only criticism of the book is that there is a bit too much politics in it.

Perhaps not my favourite Trollope book and, at times I found myself extremely irritated with our chief protagonist. At least the reading was good.

An excellent listen, shame about the volume fluctuations

I’ve absolutely loved every book in this series and Timothy West is a fabulous narrator but I do wish they’d get a consistent audio level. It doesn’t matter if you are indoors listening on an iPad or similar but in the car it drives me potty when you lose it for several sentences or longer due to a dropped voice. Maybe I just need a new car. But the plot line, the characters and the narrator are all excellent.

Splendid reading of an absorbing story

Trollope's picture of parliamentry politics which are the background to all the Palliser novels continues to be masterly and relevant today. Phineas Redux is essentially a murder mystery which makes the plot particularly absorbing. Timothy West's reading continues at the same high level of performance which makes listening to this Palliser series such a joy.
Long car journeys have become a real pleasure!

Timothy West's narration is brilliant. His voices have echoes of the performances of the BBC series of 1974 and I guess he enjoyed that series as much as I did.

Just a great ‘read’ - the narration could not be bettered

Anthony Trollope’s chronicles could be a hard read to cover 80 chapters but an Audible narration is perfect. You are carried via the chronicle weaving through the political and upper class society life of the period. Love, life, marriage, ambition, reward and defeat holds the attention to the end.