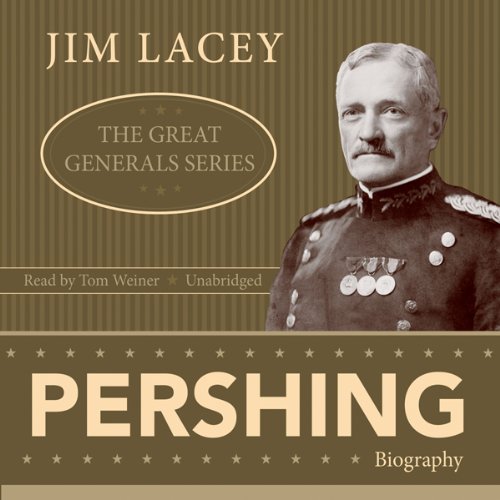 When the U.S. entered into World War I in 1917, it did so with inadequate forces. In just over a year, Pershing built and hurled a one-million-man army against 40 battle-hardened German divisions, defending the hellish Meuse-Argonne and turning the tide of the war.

With focus and clarity, Lacey traces Pershing's development from Indian fighter to guerrilla warrior against the Philippines insurgency to victorious commander in a world war.

Good biographies are hard to write and often make poor audiobooks. Frequently biographers feel the need to be exhaustive, and the audiobooks drone on. Perhaps because this is part of "The Great Generals Series," whatever that is, this book manages to tackle its subject well without becoming boring. I enjoyed the book and would give it somewhere between 3 and 4 stars.

Pershing was an important figure who led a more interesting life than you might suppose. Before commanding WWI troops, he fought in Cuba, executed an impressive counterinsurgency campaign in the Phillipines, and led US troops against Poncho Villa in Mexico. He was a ladies man and had two great love affairs both with much younger women (though Lacey does a fairly poor job of bringing out Pershing's human side, which probably would have pleased Pershing). The first of these, his first wife, died tragically in a fire along with all but one of their children. Perhaps all this is why three biographies of Pershing have apparently been published in the last decade. I don't know if the other two do any better, but Lacey fails to really convince that Pershing is a figure worthy of study.

Let me attempt to make the argument: Thomas Ricks' recent wonderful book "The Generals" makes the case that the modern US military was largely the creation of one man, George Marshall, and that because the majority of young men of the WWII era served in the army, Marshall's personal style and strong character had untold impact in shaping the American century. In Ricks' telling, that's where the story begins, though he certainly mentions Marshall's close relationship (along with many of the other prominent WWII generals) to Pershing. After listening to this book, it's clear to me just how much Marshall absorbed from Pershing's leadership style. Pershing on the other hand, in Lacey's telling, didn't really have a mentor, just a hero: Ulysses Grant. Pershing taught himself the arts of leadership and logistics, and set the mold for the American commanders that followed. There feels to me a political dimension to all this. It's hard not to perceive a strand of creativity and liberalism in the thinking of Pershing and Marshall. Pershing, for example, repeatedly provided Phillipine insurgents with a route of escape as long as they symbolically surrendered the fight. In doing so, Lacey tells us he had much greater success than most of the army in other areas of the Phillipines. Marshall is remembered today as much for his contribution to rebuilding after WWII as for winning it. And Marshall's protege, Eisenhower, also showed his tendencies towards liberalism, especially as compared with more rigid military thinkers like MacArthur. All of this is very much in the great man school of history, but you cross that bridge the minute you start to read or write a biography.

All that being said, this is not the most exciting history book out there, and the lessons Lacey attempts to draw and comparisons to recent US experience in Iraq and elsewhere feel a little forced.

This was a very good book. I got it so that I could learn something about Pershing without listening to his (boring and long) memoirs. The book was only a 5+ hour listen and balanced his life without the detail of many tactical movements of Indians Wars, the Spanish American War, Pancho Villa's conflict or Germans in France during WWI...his career spanned those times. Best known for insisting on and maintaining unity of command during WWI of American forces, the book describes the many arrogant French and English attempts to assimilate Americans into an already unsuccessful meat grinder...and Pershings repeated repulses. So, it would seem that his contributions are logistics, command relations and officer development. Additionally, one sees the impact of generations of American military from Grant through Marshall and their impact on 20th century history. I think that I'll read some more from this series.

I really enjoyed this biography.

I really enjoyed this biography. John Pershing: an iconic American. wouldn't the 20th Century have been different if it had not been for Pershing and the men he inspired.

Fresh look at a great general!

Jim Lacey has done an outstanding job of updating the biography of one of America's truly great soldiers. Strongly recommended!

It struck me recently that the 100th Anniversery of World War I was almost upon us and I knew very little about it or its leaders. For anyone who desires a short, fast paced, but seemingly exhaustive review of the character and generalship of the American commander who won WW I I cannot recommend this bio to strongly.

As a 20 year Historian for the USAF I found this book superlative in it factual brevity while rendering a compelling story of a great leader's life!! Worth the time to read or listen too!!

I purchased this for my 16 year old son to write a paper for high school. Both of us enjopyed the story. Good narration too.