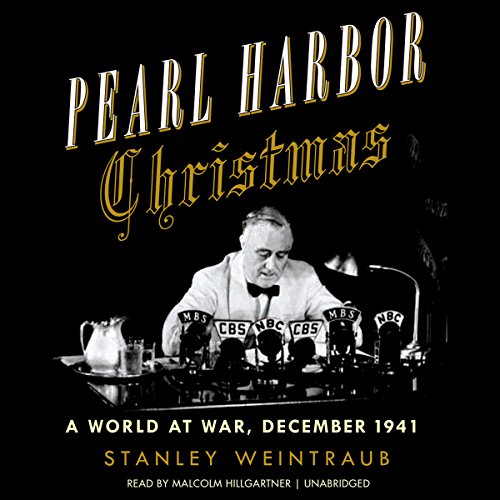 Christmas 1941 came little more than two weeks after the attack on Pearl Harbor. The shock - in some cases overseas, elation - was worldwide. While Americans attempted to go about celebrating as usual, the reality of the just-declared war was on everybody’s mind. United States troops on Wake Island were battling a Japanese landing force and, in the Philippines, losing the fight to save Luzon. In Japan, the Pearl Harbor strike force returned to Hiroshima Bay and toasted its sweeping success. Across the Atlantic, much of Europe was frozen under grim Nazi occupation.

Just three days before Christmas, Churchill surprised Roosevelt with an unprecedented trip to Washington, where they jointly lit the White House Christmas tree. As the two Allied leaders met to map out a winning wartime strategy, the most remarkable Christmas of the century played out across the globe.

Pearl Harbor Christmas is a deeply moving and inspiring story about what it was like to live through a holiday season few would ever forget.

Stanley Weintraub is a National Book Award finalist, professor emeritus of arts and humanities at Penn State University, and the author of numerous histories and biographies, including Silent Night, and 11 Days in December. Editor of a ten-volume edition on the works of George Bernard Shaw, he lives in Newark, Delaware.

©2011 Stanley Weintraub (P)2011 Blackstone Audio, Inc.
“A minor genre, the day-by-day chronicle, receives a fine addition as veteran historian Weintraub devotes a chapter each to the last ten days of 1941 plus New Year’s Day…Readers will enjoy his opinionated portraits of the allied leaders as they hammered out strategy, much of which was rendered irrelevant by subsequent events.” ( Publishers Weekly)

not quite as advertised

would not, unless they knew the real subject. This is NOT about Pearl Harbor, but the politics in late December in Washington. It also poorly connected the events described.

Book just trails off on a certain date

Narrator was just ok, could have made it more interesting.

Did Pearl Harbor Christmas inspire you to do anything?

not really. as a pacific war history buff, I just moved on.

Not much has been written about this early period of the US entry into WWII. This fills in many of those blanks.

FDR WAS NO SAINT

The slant towards making the racist socialist, FDR, appears to be a saint, and responsible for everything good that happened in America and overlooking all the evil and bad things he did, aside this was a good book.

brings to light the history of how hard things were in 1941.

Would you listen to another book narrated by Malcolm Hillgartner?

Was Pearl Harbor Christmas worth the listening time?

This tells the story of what happened to various people in the month or so after Pearl Harbor. It reads like a naritive of news events but in an interesting and provocative format. It takes the reader to several theaters of war and deffinately gives the essence of what people who were living must have heard and felt. History doesn't get better than that!

What does Malcolm Hillgartner bring to the story that you wouldn’t experience if you just read the book?

The narator give the piece a sence of what those living it heard.

This was a book that I did listen to in one sitting. I couldn't put it down!

Try Professor Weintraub's other war book "The Last Great Victory" If you liked this you'll like that too.