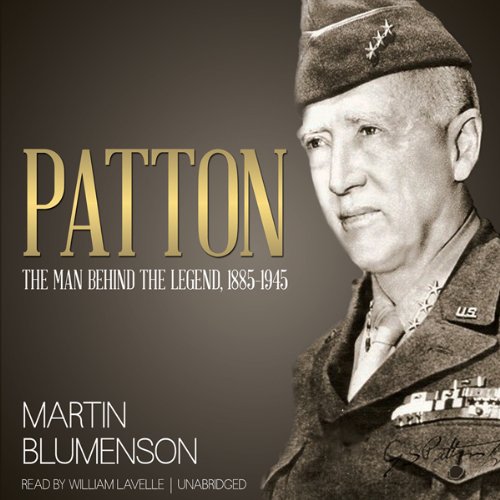 In paying final tribute to his Third Army commander, General Eisenhower said: "He was one of those men born to be a soldier...whose gallantry and dramatic personality inspired all he commanded to great deeds of valor." This detailed and persuasive study by the author of The Patton Papers was described by Patton's daughter Ruth as "an extraordinary book". It is widely considered the best biography ever written of the General, an American hero as compelling as he was complex.
©1985 by Martin Blumenson (P)1990 by Blackstone Audiobooks
Seconda guerra mondiale
Mostra di più Mostra meno

"A gem of a biography...No previous work on Patton can match it." (Stephen E. Ambrose)
"Blumenson makes [clear]... the contradictory elements in his character that caused him at times to be outrageously impossible but made him a winning commander." (Forrest Pogue)

I liked this book because it gives a picture of the whole personality of the man as well as his family history, etc. It's a fascinating book. It "listens well" and my husband and I could hardly wait to get to the next disk.

Good listen if you want to know more about Patton the man.

As others have noted, the audio quality is bad (it is old and my guess is that is comes from a cassete-tape).

a non-flattering performance on a dry book

Yes, I enjoyed hearing about the life of Patton, but it's not my favorite audio book. Like every great person and leader there are aspects of their life that might not be "to form" but there is a lot to be learned in this book both about Patton and about how to be a "blood and guts" field commander. The book itself appears to be very dry, a never ending string of excerpted quotes from letters, glossing over interesting parts of Patton's life and going into great detail on things like Patton's self-depreciating letter style and his head injuries. The book doesn't take you into the brain and life of patton as good biographies do, it simply recounts his letters and historical facts like a history book.. dry and uninspiring stuff for one of the most dynamic field commanders in the 20th century.

It's like they hired Barack Obamma to read G.H.W. Bush's autobiography. Patton was a Type-A field general with many great qualities, a very "conservatively" minded individual with strong ideals and grand motivations. The narrator has an inflection while reading the book that seemingly betrays negative personal feelings towards Patton. It is like he doesn't like Patton or the book but he is hired to read it. There seems to be a lot of emphasis on Patton's character faults, but not much enthusiasm in his accomplishments. Granted the book is not exceptionally flattering, so that may be a large contributor. Like many audible books, it would be much better if the author was reading it.

The movie Patton is better written and a more entertaining view of Patton, his life, his motivations, and his personality.

A general good rule to follow in Audible is that books read by the author themselves are best. In this style you have a biography written by a person with somewhat of an axe to grind and read by another person with seemingly similar convictions. It fails to capture what I believe is the true essense of Patton the person. I was hoping to be more inspired by the experience

Patton's biography is a great listen, however, the audio quality is disappointing. The narrator is decent, but again, the quality made this review less than what it should be.

It's great listening to the history of the end of WWII and the inner workings and political. intrique between him, Ike, and Bradley.

Really enjoyed this. Good insight into the man, dispelled some myths and verified others. If you like WWII history, or the history of individuals who made a difference in his/her time, you'll like this

Would you try another book from Martin Blumenson and/or William Lavelle?

Would you be willing to try another one of William Lavelle’s performances?

Was Patton worth the listening time?

Excellent book about General Patton! The only downside was the audio quality was very poor, sounds like a recycled recording from an old book on tape and there are several breaks throughout the book with missing portions.

What a man - book needs to be four times as long !

Having read many books about World War II and the highly recommendable book "Brothers, Rivals, Victors" about Patton, Bradley and Eisenhower, I knew quite a bit of Patton's war exploits but wanted to learn more about the evolution of this man. Here this book is truly outstanding and provides deep insight into how this splendid officer, gentleman and human being was shaped and what drove him. The World War II phase of his life, so full of triumphs and set backs, falls a little short of expectations but this time is extensively covered in other books. Patton was one of the few man I truly admire for all his facettes. He was a non-conformist who conformed because he had such an incredibly high standard of professionalism, duty and was a true patriot. I can recommend the book for anybody who wants to see the character behind the war hero and wants to understand how such an extraordinary personality is formed. Some historic flaws such as praising the 3rd U.S. army as the military force capturing the highest number of enemies ever (the war started before Germany declared war on the U.S.A. and bigger encirclements happend in the early months of the Russia campaign of the Wehrmacht) are not dimming the excellence of the content. Need a special teaser to listen ? Here is a Patton quote: "Troop leadership is like moving spaghetti - pushing from behind buckles the pasta - pulling from the front makes it moving". Just marvellous right ?

Expect lots of gaps in the recording and mispronounced words. The content itself was interesting, though not particularly engaging.

Superb Soldier of His Time

George Patton would never have become a legacy if living in the 21st century. Will we ever have another of his leadership, tenacity, and fear by our enemies? The brave are likely snuffed out by our risk-adverse culture. Will we survive for long in such a climate? I pray a leader will arise to show us anew.

Not the most in depth account of Patton but not a bad one either. A nice over-view.

Poor audio quality, fading in and out. Sounds of someone talking in the background. Great pity as it was otherwise a fascinating glimpse into the life of one of the great military figures of the 2nd World War.

Interesting book about an extraordinary man

Rather than listen over the usual few weeks, I had to finish this in just days.

Audible should check the editing as sometimes it skipped.

There are periodic gaps in the narration. Which if wasn’t for the fascinating subject I may have given up on it. The sound quality overall was also pretty poor.

Patton was a great military leader if somewhat flawed individual that is, for me,what it means to be human. In his case definitely one of the greats f his generation.