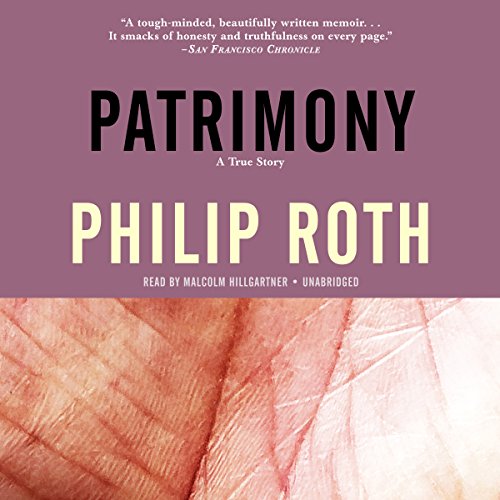 Patrimony, a true story, touches the emotions as strongly as anything Philip Roth has ever written. Roth watches as his 86-year-old father - famous for his vigor, his charm, and his repertoire of Newark recollections - battles with the brain tumor that will kill him. The son, full of love, anxiety, and dread, accompanies his father through each fearful stage of his final ordeal, and, as he does so, discloses the survivalist tenacity that has distinguished his father's long, stubborn engagement with life.

Philip Roth is hailed by many as the reigning king of American fiction. Winner of the National Book Critics Circle Award, this memoir about love, survival, and memory is one of his most intimate books, but also one of his most intellectually vigorous. Patrimony is Roth's elegy to his father, written with piercing observation and wit at the height of his literary prowess.

You must not forget anything

"Even the bast@rds die. That's about the only good thing you can say about death--it gets the sons of b!tches, too."
- Herman Roth, quoted Philip Roth, Patrimony

One of two memoirs/autobiographical works Roth completed. It seemed appropriate to start reading this on Father's Day the year Roth himself died. It was touching, beautiful. It is something as I get older I'm dealing with in my own family and at work. I have clients with tumors progressing. I have a grandmother (my last surviving grandparent) who is struggling in her 80s. Life starts to both warp as you age and become suddenly VERY clear. There are these moments of mortality when you suddenly GET your father or your mother. Caring for them, you become aware not only of their life, but even more aware of your own. Staring into the void is both scary and thrilling. Dying is hard. Living is hard. And in the end you feel like you can't forget. "You must not forget anything."

One of his best! Very heartfelt and loving towards his father and perfectly balanced.
The end.😀

Not sure I can add more than what has been already said.

Except brilliant reading by Malcolm Hillgartner. He along with Roth made the people and emotions come to life for me.

Additionally having lost my father over 20 years ago and my mother five years ago, Patrimony is recommended in thinking back to those losses.

This is a touching, yet neither sentimental nor sweet, account of his father’s last year or so, as he was aging and losing his functioning abilities to perform certain functions. Clearly there is a lot of love and respect between the two and their deepening relationship is touching. Expecting more criticism and sarcasm from Roth, made this “eyes wide open” description even more touching in its lack of judge-mental barbs at his father, at aging or at the anecdotes he relates. I thoroughly enjoyed this listen!

The narrator is so spot on that he manages to make even Phillip Roth seem reasonable and somewhat likable most of the time. Nevertheless, the almost constant focus on “Jewishness” eventually becomes more than tiresome, maybe even irritating and for me at least, sometimes gets in the way of Roth’s otherwise superb writing style. Still, I enjoyed this book more than I have any of Roth’s fiction; it was extremely insightful as well as entertaining. I do recommend it.

I am a daughter, not a son, but

i think this is the one book every son would have liked to write.
Hillgartner is, maybe, a tad too cynical or detached at times, bit this is a great performance anyway.
Philip Roth, I miss you.

Didn’t want it to end

A beautiful story of a son’s devotion to his father in the last years of his life. A tribute to the complexity of a father and son’s love and relationship in the modern era.

I liked it but I was sure it will be better written, more special but it is very simple. basic stories but interesting and touching at the end

I became absorbed into the narrator's honest, emotional account of his father's last year's. I was able to identify with his main protagonist, his very complex father.
I was very moved by the tender, raw emotions laid bare. Very cleverly written; I was very tearful at the conclusion of Philip Roth's moving account of his father's death. I was also aware of the humorous theme running through the story. I recommend highly.
P.Hopewell