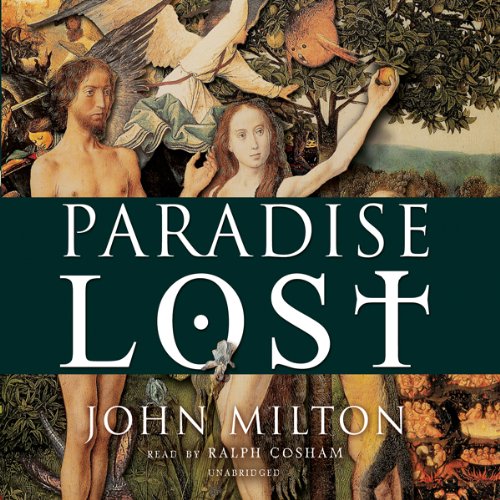 Often considered the greatest epic in any modern language, Paradise Lost tells the story of the revolt of Satan, his banishment from Heaven, and the ensuing fall of Man with his expulsion from Eden. It is a tale of immense drama and excitement, of innocence pitted against corruption, of rebellion and treachery, in which God and Satan fight a bitter battle for control of mankind's destiny.

The struggle ranges across heaven, hell, and earth, as Satan and his band of rebel angels conspire against God. At the center of the conflict are Adam and Eve, motivated by all too human temptations, but whose ultimate downfall is unyielding love.

Written in blank verse of unsurpassed majesty, Paradise Lost is the work of a mastermind involved in a profound search for truth.

Milton's stated objective in writing Paradise Lost was to "justify the ways of God to men"; yet a controversy has developed among the literary community as to the epic's merit. "Poetry", said Dr. Johnson in his life of Milton, "is the art of uniting pleasure with truth, by calling imagination to the help of reason." If Paradise Lost does not fulfill this definition, what does?

Without refering to Paradise Lost's importance to Reformation and literary history, which is well-known, I personally found greater spiritual treasure in listening to this work than any other audible Christian fiction. The vivid images of the angels' and man's fall, so beautifully and poignantly related, are harrowing. The terrible betrayal by these creatures, contrasted with the Father's loyalty and truthfulness, is tragic enough - but the further consequence of the Son's willingness to atone for man is told in such a way as to make one cry for His holiness and love!

The narrator is adept at reading this Stuart-era English, and emotes very well, without overacting. If you haven't read this work, be warned that it is in "Shakespeare" speak. There are classical Greek references galore, too. It would be a tough "read" for someone unaccustomed to such literature, but this recording will help, especially if you truly read it concurrently. And who wants to read within your comfort zone? That's like eating pablum.

If you already know and love the work, this is another dimension from which to approach it, and a good one. If you don't know it, this fine production will help immensely. Soli Deo Gloria.

Louis from Dallas in his review has summarized his review far beyond my abilities. But perhaps, as a novice in this type of literature, I might encourage other novices to brave this "new" style and enjoy it as much as I have. Shakespearian it is. But like Shakespeare's most entertaining works, this book also educates while entertaining.

I was most pleasantly surprised at how fast and completely I was able to comprehend the message, while never even once yawning or looking for something else to do. No, indeed, everything else was set aside until I had fully digested this work.

This is definitely a major requirement for anyone who thinks they know how to appreciate the English language. I highly recommend this work to anyone looking to expand their horizons.

God, Interloping and Satan; All Mixed Together

Paradise Lost, written by: John Milton, and narrated by: Ralph Cosham. Written in about the middle of the 16th Century (about 75 years after Shakespeare’s writings) it retells the story of the Fall of Man. Man, and woman’s undoing by Satan; which results in the expulsion of humanity from the Garden of Eden. Its underlying purpose is to show the way of the Lord – at least how God was thought of in late medieval Europe. To make it more of a challenge and enhancr its enjoyment, It is written in poetic verse.

The poem begins with Satan’s expulsion from the league of Angels and his attempt to seek vengeance by denigrating God’s admiration for man. Satan uses man’s lust for self-interest to dismay God. Yes, it is not only a show of appreciation for the existence of God, as known by the Christian world, but a critical statement of man’s debasement and his need to follow Gods way or perish.

It is one of the world’s most effective and astonishingly brilliant sales pitches. Be an obedient Christian. It works and the opportunity to experience its magnificence should not be missed. You may want to read it once, twice or even three times. There is enough there to keep your interest. Do not worry of a bad reading, because Ralph Cosham is perfect! Could not have been read any better.

Now I am not an advocate of all that Milton espouses. For example: After eating the forbidden fruit, Adam and Eve have lustful interloping. (Why have a forbidden fruit? Why do they need to bear a burden for affection?) Naturally, thereafter they sleep. That’s good. Milton though, speaking on behalf of the Church, gives them nightmares, guilt and shame. The poem makes this an act against God, and instead of appreciating each other they spout mutual recriminations. My gosh. Does not seem to me the preferred method for making happiness in life. With such burdens no wonder our species commits horrors.

Okay, then why do I say this is an absolute read. Because in majestic poetry you are told all one needs to know to understand the western world. Magnificent demonstration of mastery of the Word, good management of playing with English words, and a masterful intermix of thought, values and words.

Detailed info relating to events before and after

What did you like best about this story?
It described who the highway to hell was built for.

What does Frederick Davidson bring to the story that you wouldn’t experience if you just read the book?
There's a certain calm madness with his voice that accentuates the words, as though read by an exited mortician

Was there a moment in the book that particularly moved you?
When the demons that were cast into hell were scheming as to how to get God back while discussing the famous "new created world" as mentioned in legend by the “heavenly scribes” and how to pervert it.

Also when Cerberus was entrusted by the LORD with the key to hell and would be held responsible should any creature escape. There was a struggle in hell against him to get the key. Satan, prevailing with his persuasion won him over, got out and crossed thru chaos, ventured many a night and finally arrived into the garden of Eden. Angels were on their guard passing info that something may have happened in hell and that Adam should be put on guard regarding current events as well as info about the future.


Any additional comments?
The book suggests that the sum total of the fall of man was that there is no "fall of man", merely what the fruit implies....a knowledge of good and evil. That Man still has his power of domination on the earth, his power of the spoken word and control over his thoughts. as before. God still favors and respects the created, it's merely the internal struggle of Adam's inherited woe within us that suggests otherwise. It brings to light a possibility that if Adam went for a period of time and did not eat of the fruit again, that the effects of sin would pass thru him similar to the body ridding itself of tainted food, restoring the former lost glory. Such as we are called to attain to when we fast in a correct way can we imply the Holy Spirit becomes Wholy spirit in the body again, taking fasters on a ride of divinity like no other.

I thoroughly enjoyed the literary significance of the piece. The narrator on this recording was a bit rough. I hope there are better audio versions out there.

The audio sample is different from the actual narrator, and I am not enjoying his rendition. I ended up buying a different one (narrated by Simon Vance). Please fix the sample so it is accurate!

This is not narrated by Ralph Cosham but by Frederick Davidson. Just thought you ought to know. Coudnt help feel disapointed by that. Not that he's bad or anything, just not what i expected. Should've listened to the sample first. damn.

Great Poem But A Monotonous Reader

Although not bad, this performance of PL is abit lugubrious. The reader's monotone floats up and down (its like he's always on the verge of sneezing), lacks vivacity, and kept putting me in a doze. I recommend shopping around for a reading that does justice to the dynamics of Milton's poetry. I think the better version on audible is by Anton Lesser, but it is a little more expensive. Strangely, however, i actually think epics, if they are not completely dramatized, are better read with the eyes and not the ears.

I feel unworthy to comment on such a work, except to say, it is awe inspiring. I highly recommend this book, the performance is impeccable, and the text is a work of art.

What disappointed you about Paradise Lost?

The flat, expressionless delivery by narrator Frederick Davidson ruins this beloved classic by making it a string of meaningless words, impossible to follow. A terrible disappointment.