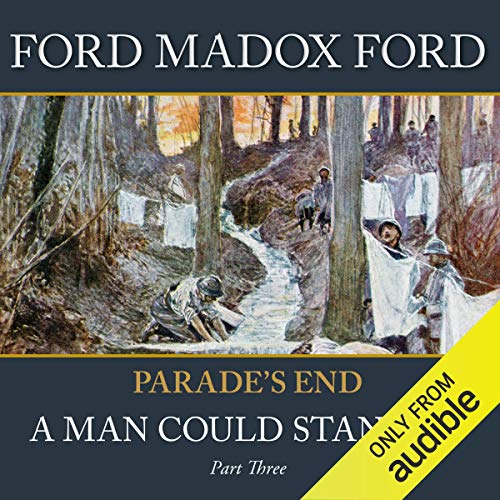 A Man Could Stand Up, the third volume of Parade's End, brings Ford's characters to the 'crack across the table of History', across which lie their uncertain post-war futures. Divided into three parts, the novel is a kaleidoscopic vision of a society at climactic moment. The Armistice Day fireworks heard by Valentine Wannop in London with which the novel opens are echoed in the nightmare bombardment of the second part, as we are taken back to the war and Christopher Tietjens, staggering through the mud of 'No Man's Land with a wounded soldier in his arms.

The final section returns to Armistice Day and joins the two characters in a frenetic dance, while Tietjens' wartime comrades smash glasses drunkenly around them.

The method of this book is difficult: it is principally an extended set of internal monologues that carry the story forwards and back in a wash that leaves the reader/listener by turns disoriented and unsatisfied. The first part of the book is the least satisfying in this regard. However, as the story moves into the trenches of the Western Front through the eyes and mind of Christopher Tietjens the sheer emotional power of the story sharpens the senses of the auditor.

The narration is effective and adroit but this is a book in which the author weaves the story with an insight and intensity unsurpassed in this sort of historical novel. I feel like a bystander within the narrative muttering "so many mistakes".

The gathering together of characters at the end of this book on Armistice Day is poignant and almost overwhelming, with the final book of this story looming with opportunity for disaster.