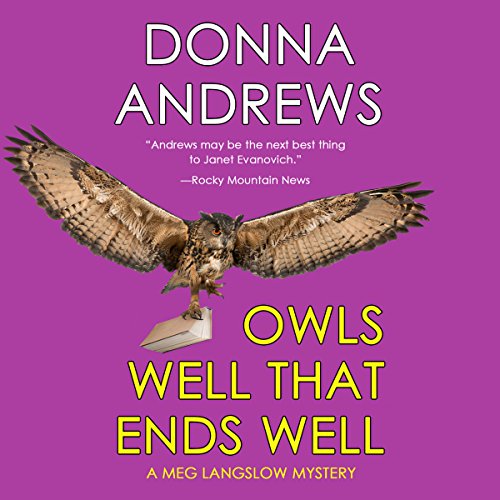 Meg Langslow was actually looking forward to renovating the old Victorian mansion she and her boyfriend Michael bought. But she wasn't thrilled by the lifetime of junk accumulated by the house's eccentric previous owner, Edwina Sprocket. The easiest solution: hold the end-all and be-all of gigantic yard sales. But when the event attracts the late Miss Sprocket's money-hungry heirs, the over-enthusiastic supporters of some endangered barn owls, and customers willing to go to any lengths to uncover a hidden treasure, Meg suspects things have gotten a little out of hand. Then, an antiques dealer is found stuffed in a trunk with his head bashed in - and the yard sale turns into a days-long media circus.

I love this author and the characters in her books. This one is not the best of them but is still really good. I gave it 4 stars on one problem that I see as a fan of mystery. The book took to long to get to the mystery. Not that the story was slow at the beginning but rather was more of a development of the characters in the town, which was entertaining and was still a page turner. But I prefer more mystery then drama .

Don't get me wrong I still loved the story and will be glad to get the next book in the series. I have listened to the 1st 2 books and the last several. and I am over joyed that the 3rd &4th are finally on Audible. I now own all the books.

The story rambles on with details and antics that get monotonous. Too may characters and chaos .

These Books are the Best!

The 1st book started off really slow for me but once the action started, I couldn't stop listening. I love that the birds in the title are a side issue/plot from the book. I find myself literally laughing out loud at Meg and her family. I can understand her frustrations most times.

Unguessable how done it

Well defined by both narration and writing

The world of Meg Langslow is always a bit chaotic, and never more so than OWLS WELL THAT ENDS WELL. Humorous doesn’t begin to describe the yard sale Meg and her boyfriend Michael have chosen to host at their new home, the run-down Sprocket Victorian mansion a bit outside of town. The house sale had included all the furniture and clutter that Edwina Sprocket had accumulated. What would have been a large yard sale only grew when Meg’s family learned about it and wanted to participate. Ultimately taking up 2 acres of land, each relative, friend, and neighbor had their own tables set up.

Dawn arrived with bargain hunters ringing the doorbell even though the posted opening time was 9 AM. Fencing and the dog Spike guarded the sale area until then. Meg’s dad was more concerned with the owls nesting in the barn, especially the fledglings. Signs were posted saying to keep out of the barn. Of course, no one listened. The worst offender was an antiques dealer who kept hiding his finds in the barn until he paid for them. He was overheard arguing with an English professor about a particular book by a favorite author. The dealer claimed to have a wonderful copy while the professor balked at the price.

Later that morning, the dealer’s body was found stuffed into a trunk hidden in the barn by yet another shopper. Next to the trunk was a bookend the professor had planned to purchase but was now bloody from bashing in the dealer’s head. The police were called, and the yard sale was shut down to quarantine the crime scene. The dozens of shoppers did not want to clear the yard so they could guard their choices. Traffic clogged the road so when the media arrived, they parked in the front of the house, as did various vendors selling funnel cakes, snow cones, and more. Even the sheep from the farm across the road were let loose when the ever-growing carnival spread to that lot. While solving disputes and problems during the sale, Meg was able to snoop quite a bit to try and determine who the murderer might be.

Donna Andrews brings us a yard sale where everything that could go wrong, does. Each catastrophe (real or perceived) brings on laughter, chuckles, and even guffaws from us readers, not the characters. Most of them are in great distress, one way or another. All the stereotypical traumas that might occur are brought to light in this book. I’m sure it took a very organized mind to present so many concurrent disasters with so much charm and many giggles.

Ms. Andrews has definitely hit her stride with this sixth entry in the Meg Langslow series. I found it enjoyable, hilarious, and entertaining. Even after a suspect was arrested, so many alternatives became apparent that Andrews incorporated in the now twisting, turning mystery. The ending was unexpected, with many crimes and situations resolved. Except the yard sale.

Bernadette Dunne’s narration was wonderful. Her calm voice brought us through characterizations but was mainly Meg’s voice since this is told from a first person perspective. However, I would know her mother and dad’s voices anywhere, so well defined by both narration and writing. A fabulous rendition of a terrific tale.

As a condition of buying the house and property at a bargain price, Meg and her boyfriend not only are stuck with an endless list of vital repairs but also the sale of all the countless collections of oddities left behind by the previous owner at her death. Bad enough, but all of the stuff has to be watched over and the money gained shared by the former owner's relatives! So a vast yard sale is organized and all of Meg's relatives set up their booths as well. It's crazy enough, but gets infinitely worse when Gordon-You-Thief is discovered dead in a trunk in the barn. Good sleuthing with plenty of lying suspects, plot twists, and red herrings! Lots of fun!
Bernadette Dunne continues to be a great narrator.

I’m an avid audiobook listener and am SO glad I found this mystery series (wish I could get the first in the series as an audiobook!). This series reminds me of the Janet Evanovich writing style (Stephanie Plum series). Fun, well written and keeps you guessing until the end as to who the real culprit is.

I don’t know how she does it, but Donna Andrews has crafted another great addition to the Meg Langslow series. With all the humor we’ve all grown to expect she just keeps creating original storylines. Bernadette Dunne gives another great performance bringing it all to life. I highly recommend this audiobook/book to cozy mystery fans.

Storyline is great! Donna Andrews' mysteries are not just outrageously funny. The suspense is entertaining; all of the characters are vividly brought to life. All of this is done while keeping the story moving on at an excellent pace. Even though each book is a stand alone,it truly enriches the series if you start at the beginning. Highly recommend you pick up Murder Is Hatched.
Although Bernadette Dunne does have good pacing & emotion, her "voices" just aren't...... She has a strong twang in her voice that carries over to every character (no matter where they're from). Also, the female & male voices have very little difference. If it weren't for Ms. Andrews' staging, you wouldn't know which character was talkiing most of the time.

Meg and her boyfriend Michael are having a huge yard sale to empty out the house they just bought with the life long collections of junk from the previous resident, so renovations can start.

Things get complicated though when a local antique dealer is found stuffed in an old trunk.

The yard sale is shut down and a cat and mouse game starts finding the killer.

Great cozy mystery series for animal lovers with lots of humor and a little sarcasm mixed in for good measure.