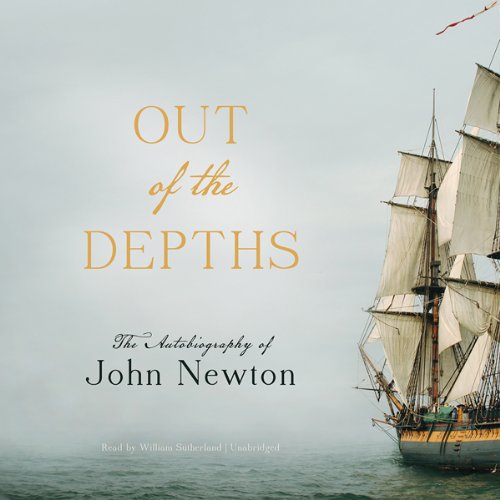 “Amazing grace, how sweet the sound that saved a wretch like me.” So begins one of the most beloved hymns of all time. This is the autobiography of the man who penned those words. John Newton, the self-proclaimed “wretch”,was an active slave trader for several years until, on a homeward voyage through a violent storm, he experienced what he was later to refer to as his “great deliverance.” He tells of the dramatic, real-life events that led him from sin and bondage to a life transformed by God’s grace.

Public Domain (P)1998 Blackstone Audio, Inc.
“ Out of the Depths provides a beautiful picture of the 'mazing grace’ Newton so eloquently described in his famous song.” ( Singing News)

Cosa pensano gli ascoltatori di Out of the Depths

to Aitken's biography of John Newton. Much of the material in Newton's little autobiography is used in Aitken's expansive book, but it is interesting to read the "eight letters" telling Newton's story all in a piece. Newton's life runs the gamut from vile slave boat captain to deeply religious follower of Christianity and author of "Amazing Grace," probably the best known of Christian hymns. His humility and honesty concerning his youthful misdeeds is refreshing and allows the reader to see the true power of religion for deep change in someone who approaches it with the true desire to be a better man.

I had wanted to hear more about his time as a ship captain of slave ships and how he left that life,
and how he wrote the famous song. But it seemed to only glance upon it. It is a good background of who he was and became.

John Newton's transformation from sinner to Christian is inspiring and comforting, and God's grace towards him is truly amazing. That said, those looking for an account of his writing Amazing Grace or doing anything to abolish the slave trade should look elsewhere. Outstanding performance.

Great reading of this amazing life. I enjoyed this book, it adds so much to the song, to understand the life.

"Amazing Grace How Sweet the Sound"

Would you listen to Out of the Depths again? Why?

I listen to it frequently. "Who is wise? Let him give heed to these things, And consider the lovingkindnesses of the LORD" (Ps 107:43).

What other book might you compare Out of the Depths to and why?

"Grace Abounding to the Chief Most of Sinners." God uses various means and various men to accomplish His will and saves renown sinners in profound ways in order that "Jesus Christ might display his perfect patience as an example to those who were to believe in him for eternal life" (1 Tim 1:16).

What does William Sutherland bring to the story that you wouldn’t experience if you just read the book?

I love his somber voice. It is very memorable and makes it easy to remember phrases and quotes from this book.

Deep book about the mercy, amazing grace, and the Providence of God.It magnifies God in Christ greatly.Praise the Lord for the life of John Newton👍.

A must read for every Christian. Encouraging and monumental to God's Grace and glory indeed!

I enjoyed learning more about John Newton and his commitment to free grace. We need the message of free grace in a world where we burden ourselves with the law.

I listened to the audio version of this book. I found the recording was either an old version or just badly recorded. But I’m not one who is put off by these things. A wonderful true story. Worth it!

Great look into the life of John Newton. I truly enjoyed this book and the narration.