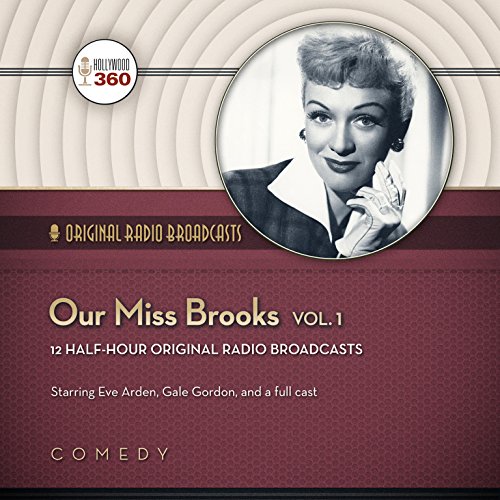 Our Miss Brooks was a highly popular radio sitcom that was eventually adapted for both television and film. It starred Hollywood film and New York stage veteran Eve Arden, who specialized in playing the wisecracking friend. She often did it better than anyone else, receiving an Oscar nomination for the 1945 film Mildred Pierce. Since her skill with the wicked one-liner was beginning to lead to typecasting, Arden signed on for the lead in radio's Our Miss Brooks to find a new image.

The radio series lasted until 1957, having already made a successful jump to television in 1952 where Arden won a Primetime Emmy for Best Female Star in a Regular Series.

What disappointed you about Our Miss Brooks, Vol. 1?

The sound mixers probably did not have much interest in what they were doing. I wanted to enjoy the old radio show but the dialogue of the actors is to low or the laugh tracks and music was to loud . only made it through the first few episodes then gave up.. I had to keep turning the volume up and down . Disappionted!!!!!!!

What other book might you compare Our Miss Brooks, Vol. 1 to and why?

None since this was my first old radio show purchase

Would you be willing to try another one of Eve Arden and Gale Gordon ’s performances?

Yes if the sound mixing was done correctly

What character would you cut from Our Miss Brooks, Vol. 1?

the kid's voice is kind of iritating