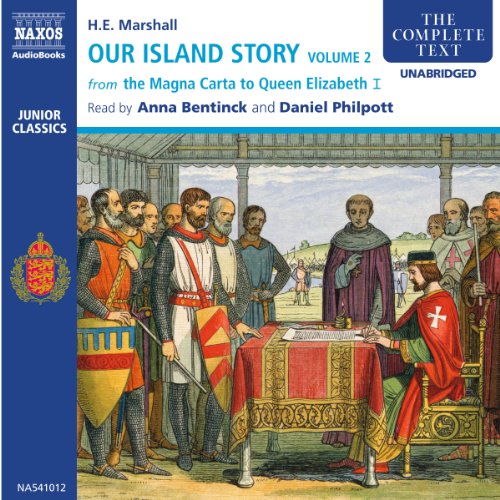 Our Island Story by H. E. Marshall is an Edwardian history book for younger listeners (aged six to 12) that tells the story of England, concluding with the reign of Queen Victoria. Antonia Fraser and many other current historians declare that it was this book that opened the delights of history for them. It fell from fashion in the 1960s, but its recent re-release in hardback has seen it become a publishing surprise in the UK, with sales of some 75,000 copies in a few months.

Now, Naxos AudioBooks releases it unabridged in three volumes, divided into three clear periods of history. Though slightly edited to take account of historical changes and attitudes, it is presented unabridged.

After listening to a history book such as this one from H. E. Marshall, one has to wonder how the subject ever got such a bad rap. What had started out initially as a way for Marshall to introduce the history of her family’s native England to her children, Our Island Story has become one of the most loved children’s history books of all time. Veteran narrators Daniel Philpott and Anna Bentinck give an enthusiastic performance, taking kids back through all the great battles and all the famous kings and queens, ensuring that not only will kids be enraptured with the wild stories, but they might just learn a thing or two.